I was both excited and skeptical when I heard the BBC was making a television show about Alexandre Dumas’ The Three Musketeers. Firstly, it’s one of my favourite books, so obviously I was either going to love this show or vehemently hate it.

The problems the BBC faced were plentiful. Firstly, basing a TV series on a book poses the issue of a limited narrative. We all know what happens in The Three Musketeers: they fight a bunch, save the king, Athos gets his heart stepped on by a hussy, then aliens inhabit their bodies and invent the iPhone. Typical Dumas.

So, is this storyline strong enough for ten solid hours of television? Luckily we’ll never have to find out, because the writer / creator of The Musketeers Adrian Hodges has stated that the show will follow the characters created by Dumas, but not necessarily the plot.

My second worry for this show was the coveted roles of the (technically four) Musketeers. There have been many a movie adaptation of this story. My favourite will forever be the 1993 version with Kiefer Sutherland, Charlie Sheen, Chris O’Donnell and Oliver Platt. Yes, I was a pre-teen when this movie came out and yes, I thought Oliver Platt was the funniest man on the planet, and YES I had a massive crush on Chris O’Donnell.

The mullets alone make this movie a must-see.

So far, so good! But of course, this is only the pilot. We’ll revisit this question after episode 10. (The second season has already been given the green light over at BBC, which is a darn good sign).

Look at me talking your ear off like a gabby lunatic. Let’s get to the episode!

We met D’Artagnan on a rainy night, just chillin’ with his dad, having a really nice time.

Oh dear! Athos of the King’s Musketeers shot his dad!

What an amazing way to launch the season. Of course, we assume the man who murdered D’Artagnan’s old man is not, in fact, Athos, but we don’t know for sure because we haven’t met him yet! You crafty writers… give yourselves some candy.

Then we got a slideshow of character introductions. 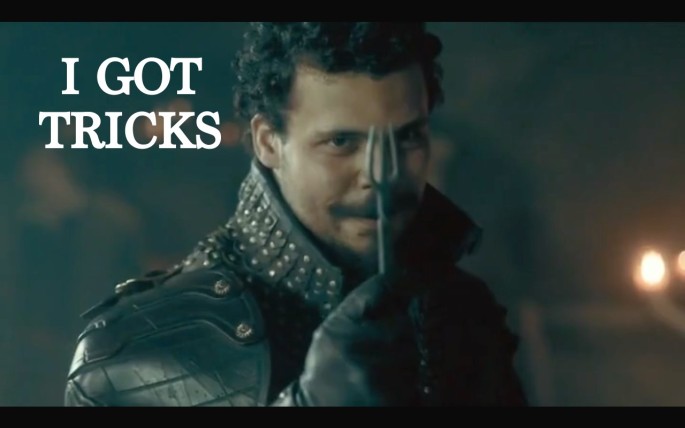 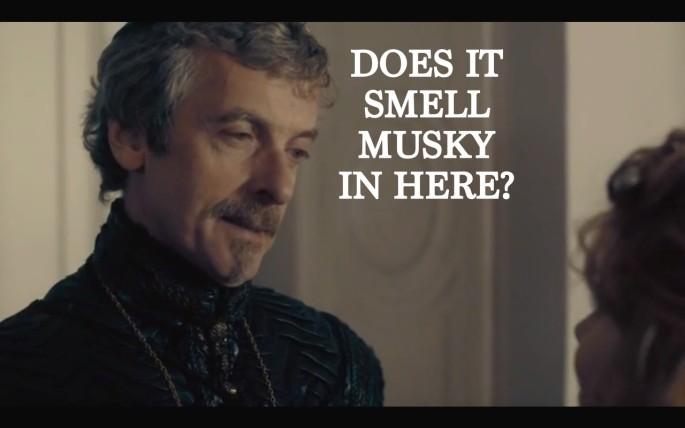 Turns out Aramis’ lady friend is the mistress of the Cardinal. Hmmmm… that shouldn’t be a problem, it’s not like he’s the bad guy or anything.

Hello Captain Treville! He wasn’t pleased they were tussling with the Cardinal’s dudes. Typical captain stuff.

Meanwhile, the Cardinal scampered to King Louis and demanded an inquiry be made into the Musketeers committing murder on their downtime. 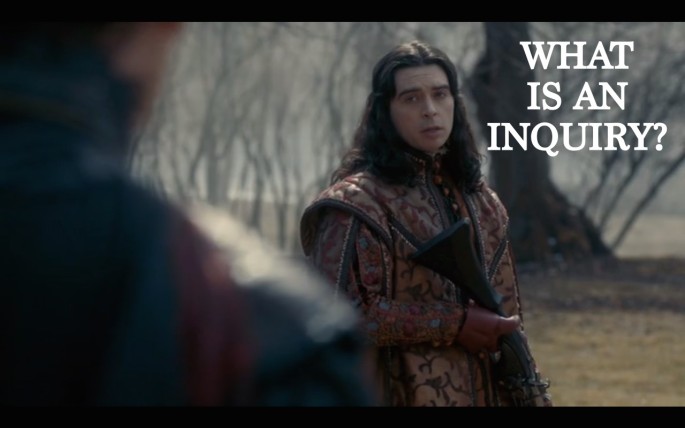 Then D’Artagnan made a new friend! 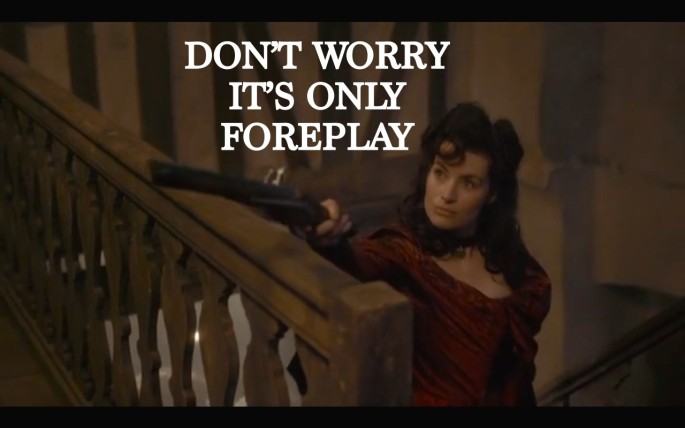 Then he collapsed (not sure why), so she took him home and patched him up.

She’s married, but there were some definite eyes being made here. I like this girl. She’s feisty.

He fought them all! I bet they’ll laugh about this later. I liked this twist on their first meeting from the book (which does not include the death of his father).

Then Treville reluctantly arrested Athos for a ton of murder and stuff.

Meanwhile, D’Artagnan was once again getting fixed up by Constance. 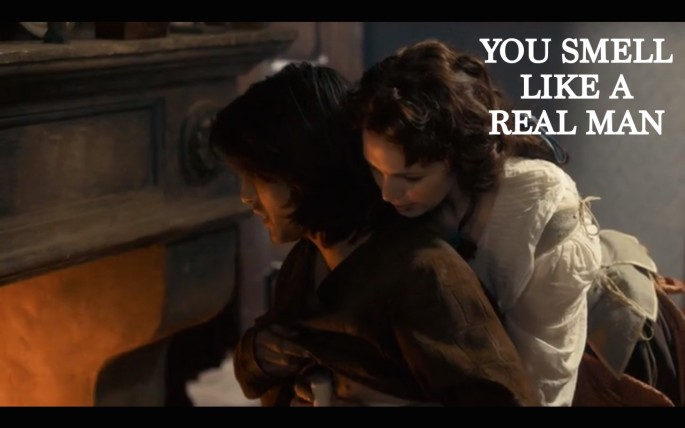 This man is clearly a boob and I love it. Aramis and Porthos came a’ knocking to recruit D’Artagnan’s help in clearing Athos’ name, and they rode to the hotel where a dead body gave them all the answers.

Then we learned that the Cardinal and MiLady De Winter are best friends forever. 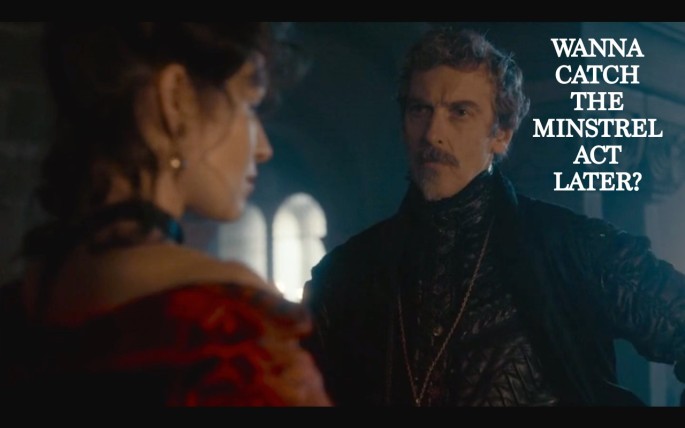 He had found his special lady friend lovingly stroking a gun, and he wanted to know who it belonged to (ruh roh!). Oh, and they’re the ones framing Athos. 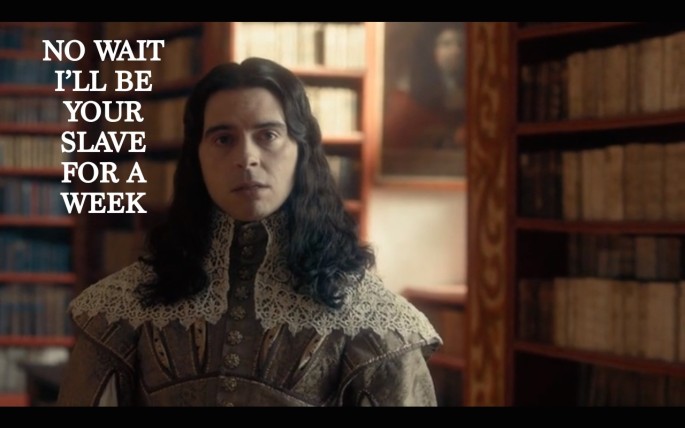 The Cardinal is a crafty sneak. King Louis said he’s nothing without him, and he’ll do whatever he says. Just grade A ruling, basically.

Elsewhere, Team Handsome found the bodies of some dead (real) Musketeers and were understandably peeved.

All the beans were spilled, and it turns out it was the Red Guard captain who did all the murdering that Athos is being blamed for. Tsk, tsk. So naturally, they snuck into the red guard camp using a very saucy distraction.

There was a very fun and thrilling fight where our three heroes bested a BUNCH of red guards. Like, I’m talking at least a dozen. Are the red guards even trained? If so, is it in pottery making and the tango?

Constance (the new love of my life) shot a man to save D’Artagnan, then he went on to win the fight with Godet, but gallantly refrained from killing him so he could prove Athos’ innocence. 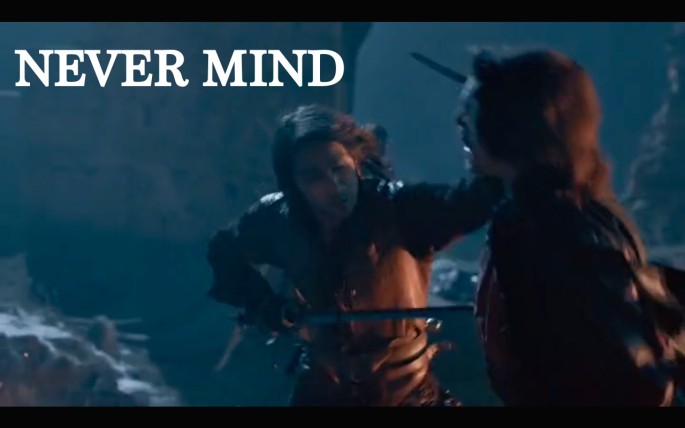 Is it written in the villain handbook that after the hero spares your life, you HAVE to run at them with a knife, thereby forcing them to kill you? It must be, because it happens A LOT.

Anyway, it didn’t matter because they found the Musketeer uniforms that would exonerate their pal. 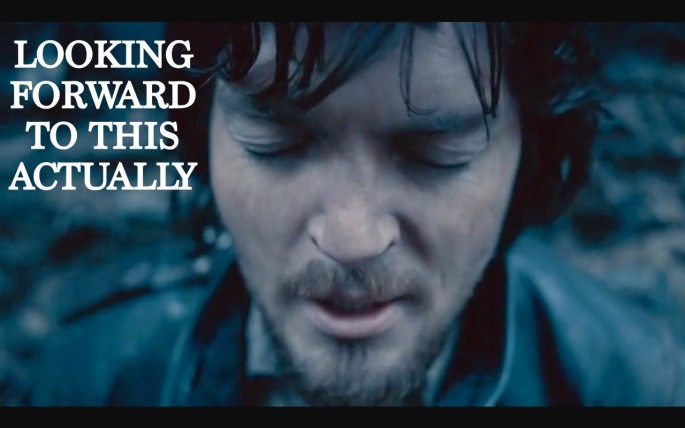 And for all his help, our boy was awarded a place at the big kid’s table. 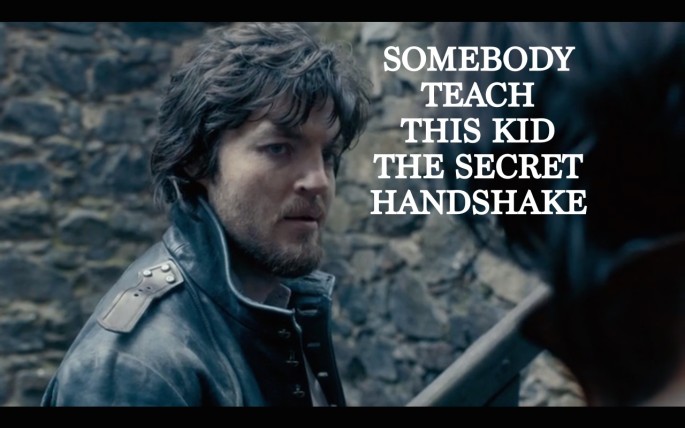 These dudes are totally best friends now, and I am FOR IT.

Then the Cardinal took his special lady friend for a carriage ride, and it was rather heart wrenching. 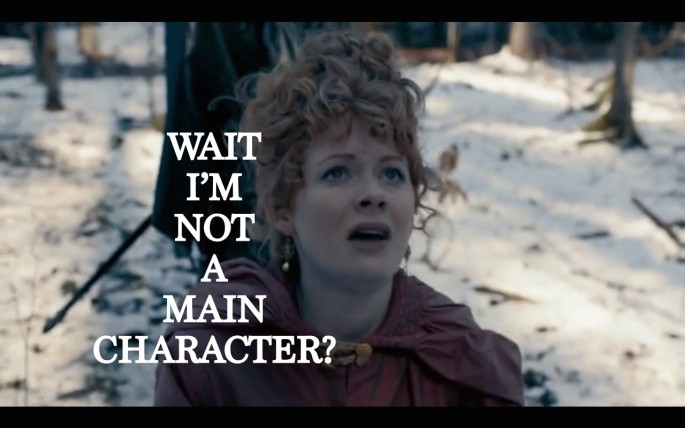 She died saying “I love Aramis”, and it was really very sad.

Oh Cardinal. He killed the red guard to keep his secrets. He is who he is, you know?

Well, what did you guys think of the pilot?

In essence, Alexandre Dumas’ The Three Musketeers is a bromance. Yes, there is adventure, humour and romance, but the message, the moral, the theme, it all boils down to brotherhood. I’m very pleased, VERY PLEASED with how The Musketeers is carrying this out.

I felt as though these three men really had been the best of pals for years and years. It generally takes at least half a season for television shows to really gel their main relationships and make us care about them, but not in this case. There is real chemistry here, and I’m pretty darn pumped to see it develop even further.

The first season has already aired in its entirety on the BBC, so please no spoilers from our friends from the UK!

That’s it from me. I’ll see you at the season finale for some more 17th century wit and adventure!

One thought on “The Musketeers “Friends and Enemies ” Photo Recap: All For the BBC, and the BBC For All (Pilot)”