Did Abby just DIE? Is everyone on the ark now in mortal peril? Will the Grounders kill Lincoln? Where did the Grounder Princess get her jacket? I’M BRIMMING WITH QUESTIONS AND I JUST CAN’T EVEN.

So many surprises! So many shocks! And the biggest twist of all – Clarke had fun! You guys, what… I just… it’s a good thing this is a photo recap, because I have no words. This show appears to have zero plans to give us a break, and I ain’t even mad!

Get it? Cause… I don’t want a break…? YOU KNOW WHAT. I’m obviously far too flabbergast to make any sense, so why don’t we just get to the meat of the matter, shall we?

The episode began with a PSA from Misteronious about Unity Day, and by the looks of the kids watching, he was riveting. 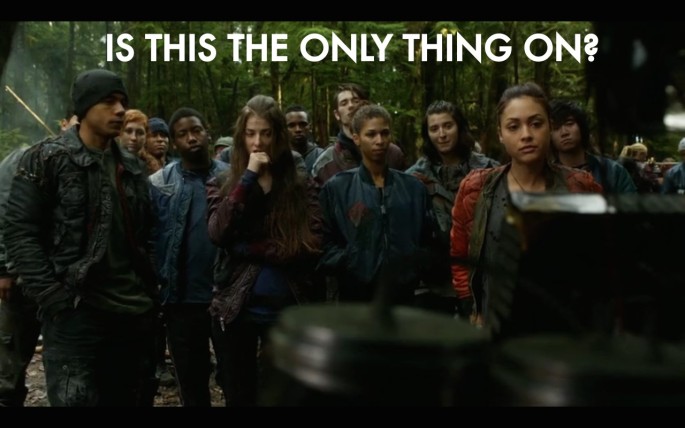 Clarke and Finn had a very on-the-nose discussion about the pros and cons of violence (oh Finn, your idealism is adorable), then Jasper lit up our lives by gracing our screens with his presence. And he had booze! (At this point I was like, “oh Monty made it? Where’s he at? Monty, where’d you go after you made it? You napping, Monty?”)

Of course, Octavia took this opportunity to slip away.

Up in space, Wibberanious noticed everyone’s eyes glazing over, so he cut his speech short, and SOMEONE was suuuuuper peeved about it.

Then Kane had a run-in with his mom that did not go well. 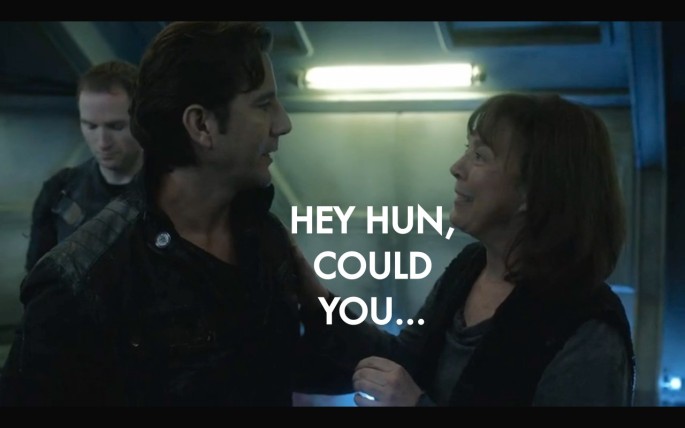 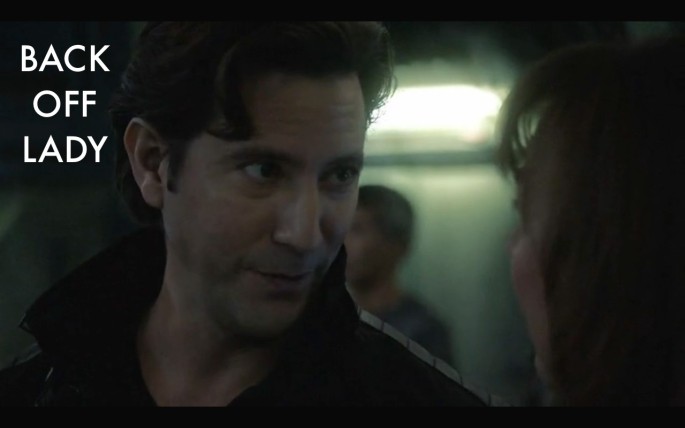 I think a basic general rule of talking with your parents is don’t act like a huge jerk, because a bomb may go off and then you’ll feel super guilty. Speaking of:

HOLY WHAT THE SHIT BALLS YOU GUYS. This really surprised me. I jumped and spilled all my carrots and soy snacks in my lap! (Okay, it was caramel corn and tootsie rolls, get off my back)

Then Kane noticed something protruding out of his mother. 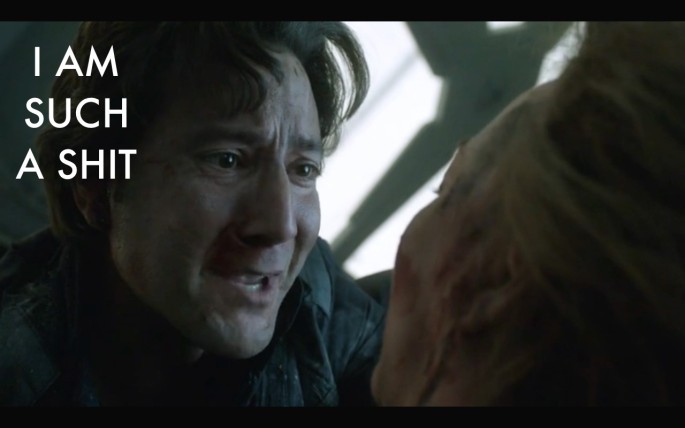 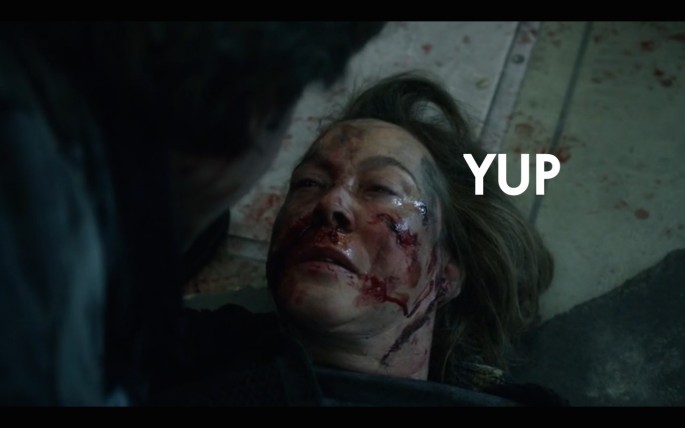 Seriously though, there was some grade A acting splattered all over this scene. Kudos to the director for letting these actors just stew in their emotions for a solid moment before any dialogue. Just the looks between Kane, Abby and Xeonubrious were enough to get me misty. Well done. They should all give themselves high fives and pats on the bum.

Meanwhile, in a hidden alleyway: 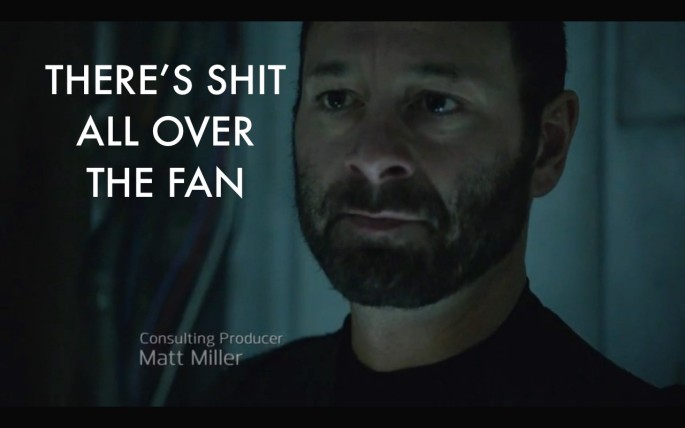 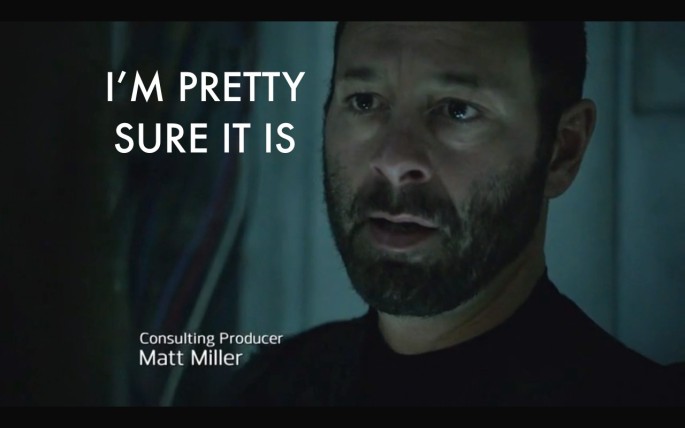 This scene basically confirmed that Diana planned for the bomb to kill Siggironious, and that she’s 100% cool with killing a ton of people in order to escape to earth. Yikes, lady! 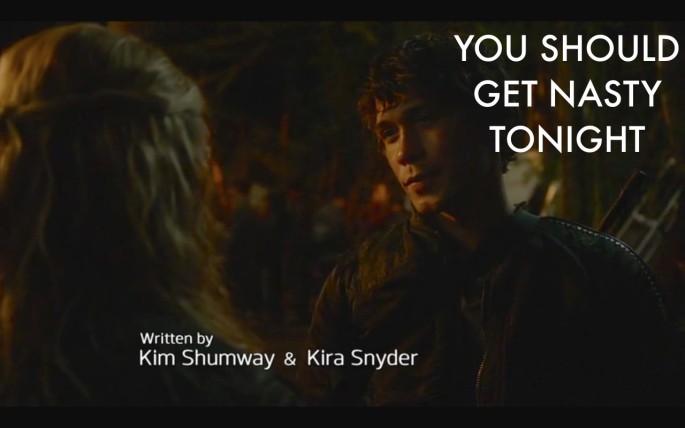 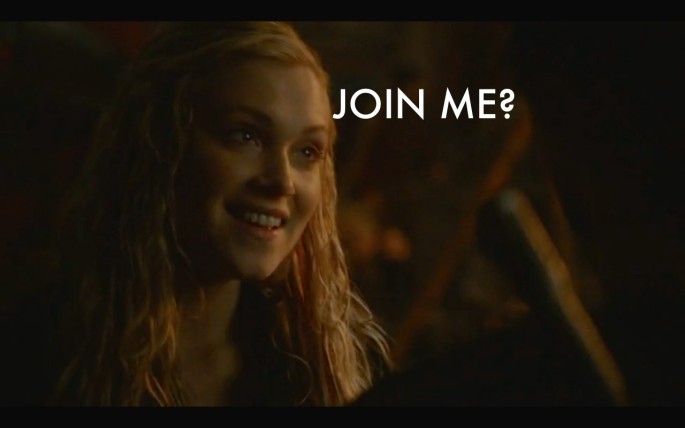 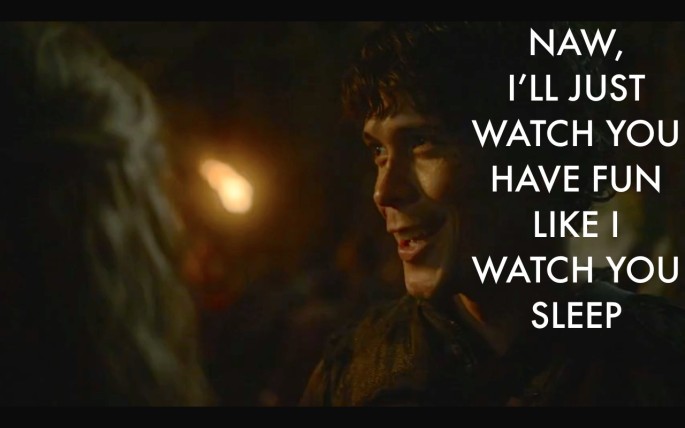 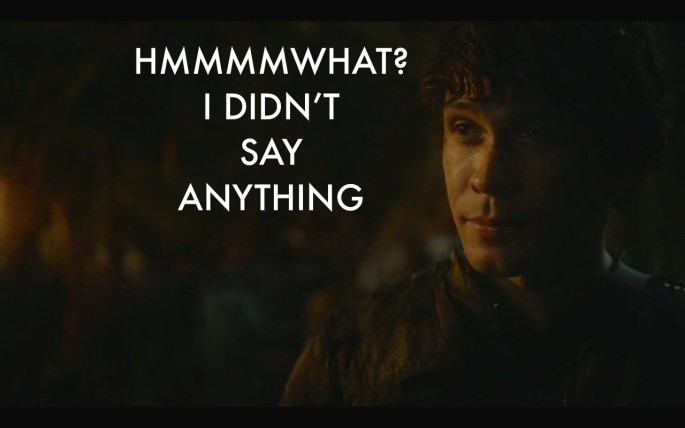 Finn wasn’t done chatting about the merits of peace, so he finally struck up a conversation with his actual girlfriend. 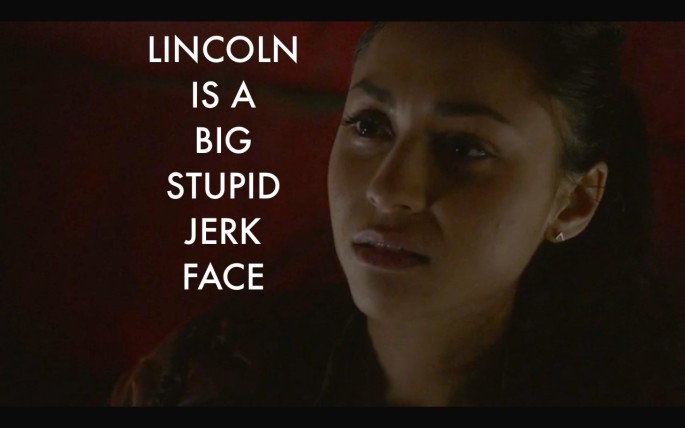 Speaking of Lincoln, we found out where Octavia had scampered off to:

You guys, how long has it been since the last episode? I guess Dave *cough* sorry, Lincoln, was giving Octavia fighting lessons? Okay, sure. Also a time related question – was this the first time they did sex together? Because for someone who lived under the floorboards her entire life, Octavia was very good at it! Kudos, regardless, that looked like fun.

That is, until a certain hero snuck up on them. 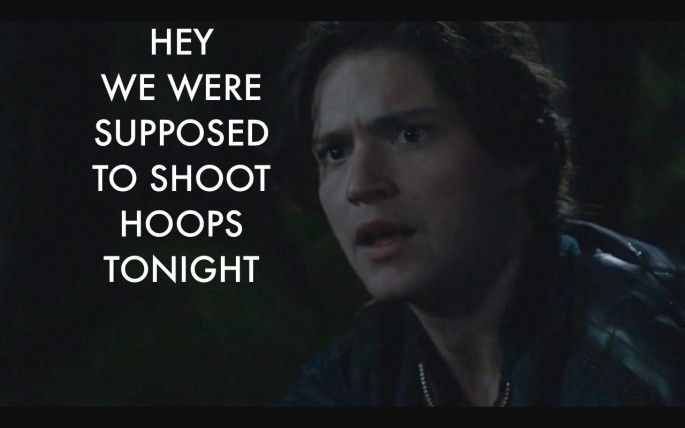 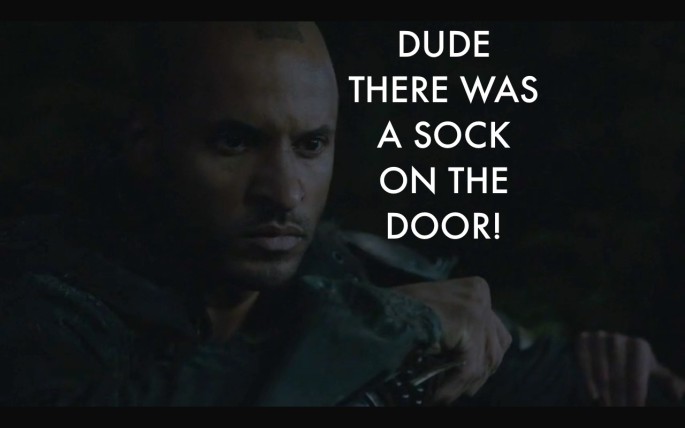 Finn convinced Lincoln to arrange a meeting between the Grounders and Clarke. I LOVED that the two badass leaders of two kick-ass tribes (just go with it), were both female.

Up in space, Diana was busy being nefarious.

Kane asked her where she’d been and she straight up dodged the question with a “I’m lucky to be alive” speech. Haha, you’d think an evil mastermind would have a lie ready to go for situations like these.

Anyway, then the greatest scene mine eyes have gazed upon happened and Clarke became a totally rad, cool chick.

I LOVED this Clarke. I wanted to hang out with this Clarke so bad. I wanted us to be at the point in our friendship where she could just pop by without calling and we would sit around gabbing and drinking wine and eating junk food and watching Pretty Woman.

But then in a fateful twist, Finn was the one enforcing the ever-present rule:

I have to hand it to Finn, this boy gave it his ALL this episode. And yes, everything he was saying was very valid and true, and in that situation I hope I would agree with him. Talking is always better than violence. ALWAYS. However, this is a television show about conflict, so I 100% agreed with Clarke in every way. Bring those guns! 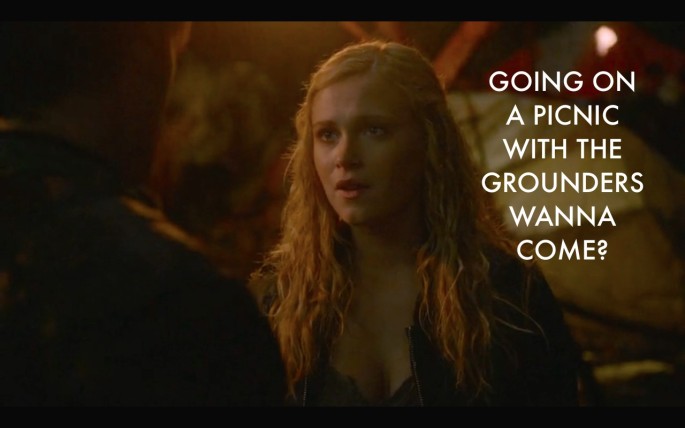 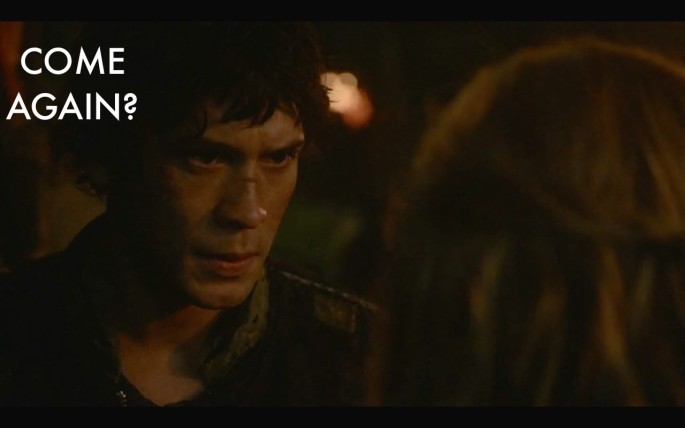 She enlisted Bellamy as backup, and then we got yet another amazing scene:

Let us all raise our hands to the heavens and rejoice with joy in our hearts because RAVEN HAS A FRIEND! And it’s Jasper! Ugh, you know when someone offers you a coffee and you drink it and it is exactly what you didn’t know you desperately needed? Like, you weren’t THINKING of coffee at the time, but now that it’s in your mouth you’re like, “my life is complete.” You feel me, right? This scene was like a billion coffees. Yes! Give Raven someone to interact with that isn’t Finn and / or the distance between her and Finn.

I am very, very over the hurt glances between Raven and Clarke and Finn and trees and bullets and food and air. Raven seems to be throwing hurt glances at everything right now. I get it, the girl is hurt. But considering the break-neck speed with which this show handles virtually everything, I am very surprised this love triangle is still a thing.

Don’t get me wrong – I’m okay with love triangles. There are roughly seventeen on this show alone that I am fully invested in. This one, however, is just making me grumpy. Raven is better than this. So thank you, TV deities, for giving us this perfect, blissful scene.

And they were off!

Back at Space Camp, Kane was interrogating Diana’s minion. 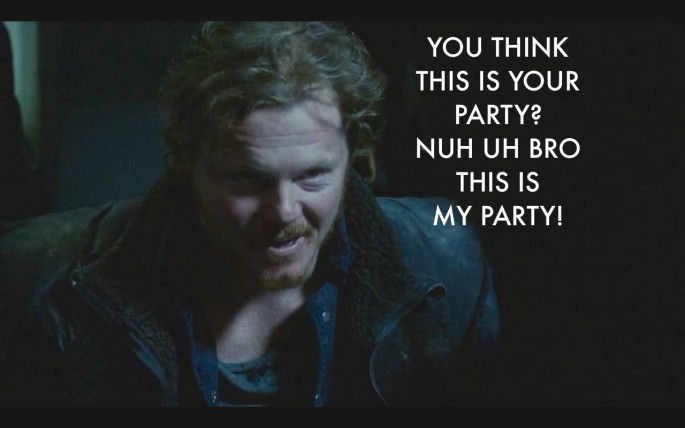 NOPE! The tables turned pretty quickly, and the minions escaped and left Kane to freeze to death.

I really like that these two are becoming buds. Remember when Willironious accused Kane of attempting to murder him? I bet they look back on that now and chuckle.

Anyway, Diana commandeered the exodus ship and simply did NOT care that only 50% of her people were on board, and the other 50% would die. Why do these people follow her?

Oh, and also, Abby was on board.

All the teens showed up at the bridge to witness Octavia and Lincoln run into each other’s arms like they were at an airport or something. Hadn’t they JUST seen each other? 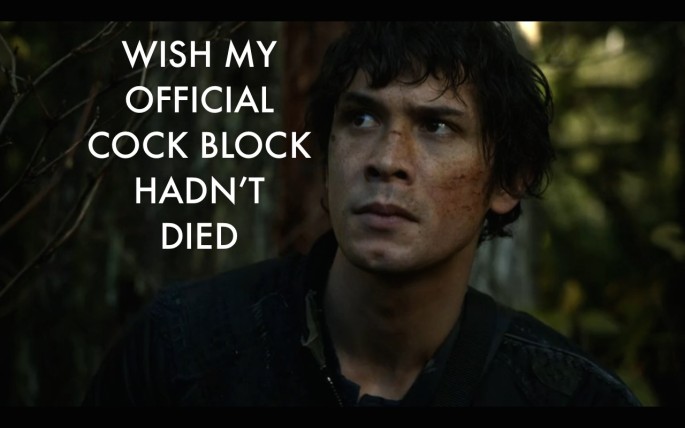 The Grounders showed up and Clarke seemed very excited about the ponies, until she realized what was on top of them.

THE BEST. Love it. I’m not even going to question where she got the make-up (is it dirt? I don’t care). Everything about her entrance was superb. Please put Dichen Lachman in every episode, even if it’s just her creeping on our teens, or picking berries, or rubbing dirt into her eyes.

A lot of fun stuff came from this conversation. The flares took out a village! Clarke seemed very unfazed by this information.

Meanwhile, Equidarious was informed about Diana’s evil plans, and raced to the launch pad. 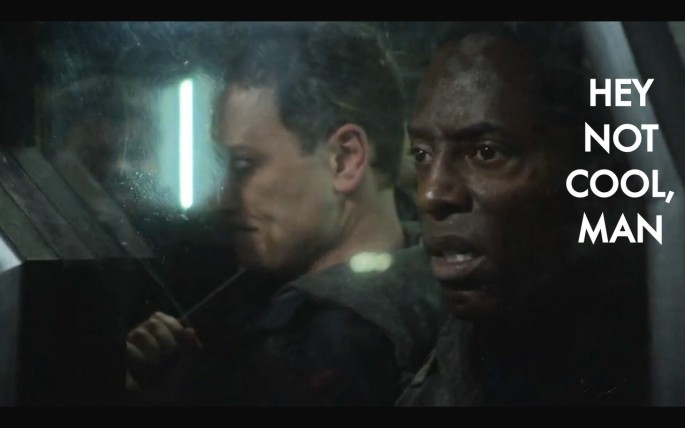 They found Abby on the ship and Diana offered her a ride.

She opened the door, but then she was zapped! That looks like it really hurts. Abby is NOT having a great day.

Back on Earth, Jasper spied some action in the trees. 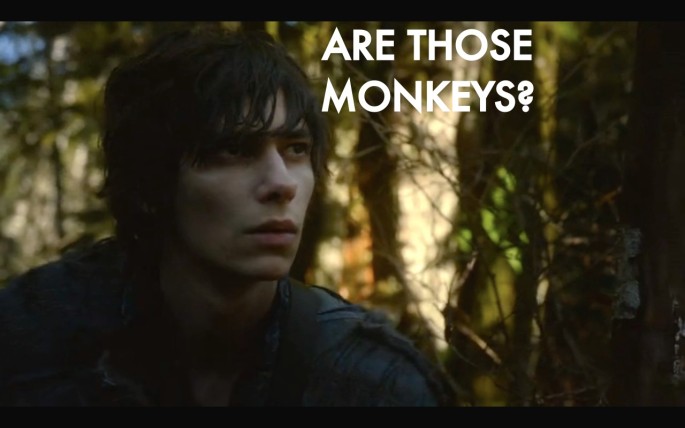 Then there was shit all over the fan! In Jasper’s defense, those Grounders DID look like they were about to shoot. Anyway, our heroes got away, but Lincoln took an arrow for Octavia. 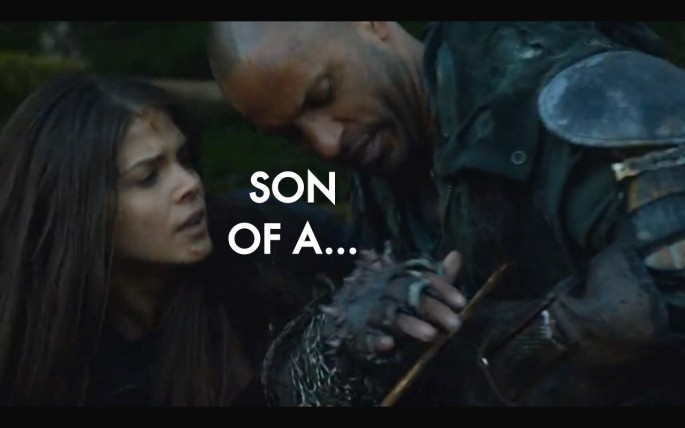 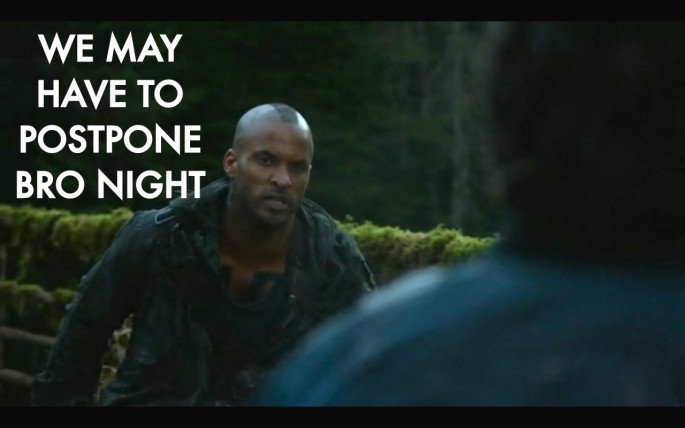 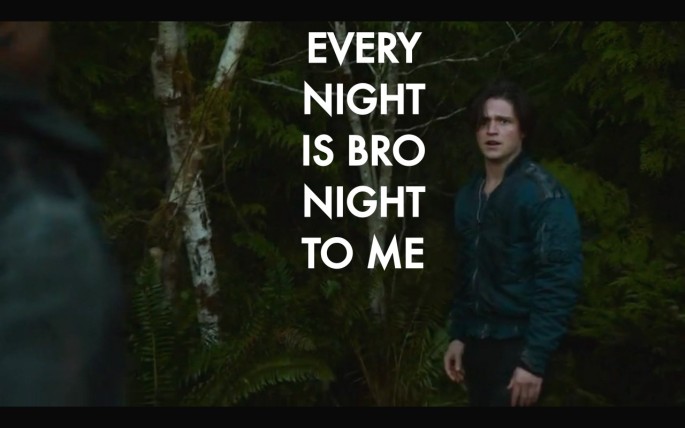 Lincoln seemed fine, but if I remember correctly, the Grounders are fond of poisoning their weapons.

Back in space, Diana was being a real a-hole. 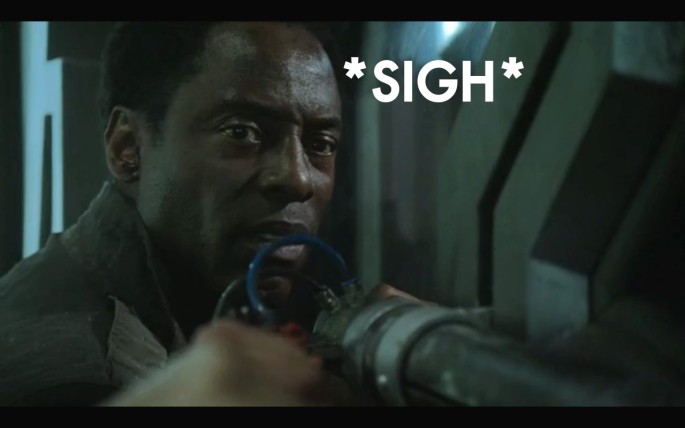 She spilled all the beans! Now the ark is dying and everyone is mad at Yeggorious. That is a pickle, for sure.

Back on the ground, all the teens were fighting. 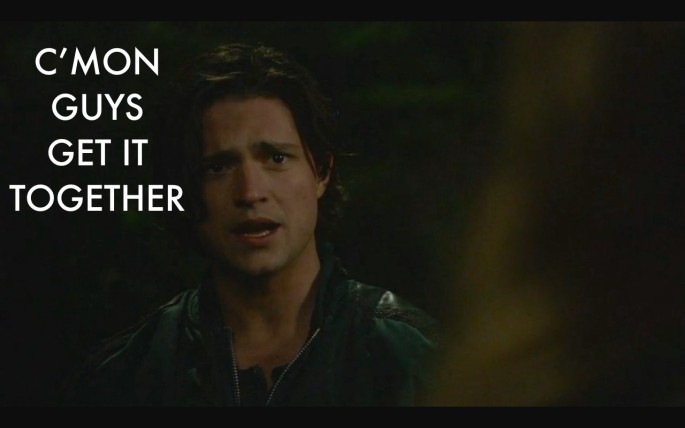 Everyone stormed off except Bellamy and Clarke, who saw a shining beacon of hope in the sky.

YOU GUYS. What in the hell just happened?

I have raved before about the Flash-esque speed (see what I did there, CW? You’re welcome) of the plot on this show, but that’s not going to stop me from doing it again. How long did you think Diana would be a masked villain, working in the shadows to overthrow our heroes? The season? Two seasons? THREE EPISODES? Just… I mean… *slow clap* I tip my hat to you, The 100 (even though I will miss you, Diana, you wily little minx).

This episode was just one in a string of excellent showings from The 100. I came into this adventure ready to love it, but very skeptical of how the story would unfold. Well, would someone please wipe the egg off my face because this show is amazing. The plot developments, the character growth, the WTF moments that make you sit up and gape at the screen… all just top drawer entertainment from a very talented cast and crew.