Could someone please check the Earth’s gravitational pull, because the world has turned upside down! The Reapers are in league with the Mountain Men, Finn is a cold blooded killer while Bellamy is the voice of reason, Abby is the Chancellor and Jasper is a total stud. WHAT IS EVEN HAPPENING.

You guys, this episode’s milkshake brought all the boys to the yard. Someone get me a straw, because YES PLEASE. There wasn’t one aspect of this episode that didn’t give me heart palpitations. I would like to throw this episode into a giant barrel and wheel it back to my party cave and watch it over and over.

This beautiful gift from the heavens began right where it left off last week.

Oh Anya! I missed you, and love you, and please never die. She was 100% uninterested in her rescue. Clarke was killing it until the doctor lady walked in to get some more blood-medicine.

The Grounders did that thing that all prisoners do in every movie and television show, where they reach their hands out of the bars to touch a passerby. I still haven’t figured out why that happens, but then again, I haven’t been in prison (yet).

Clarke got Anya into the “End Containment Area” (so creepy), where they stood on a trap door straight out of a Bond villain’s mansion.

BA HA HA HA that was AWESOME. They landed on a pile of bodies because The 100 is a creepy industry of nightmares (never ever change).

Technically they were trying to kill each other about a week ago their time, but COME ON. Sparks fly whenever they’re breathing the same air and I seriously cannot get enough. I would watch these two ladies playing scrabble for a full five hours.

Some Reapers crashed the party and Clarke had the fun idea to jump in the giant body-transporting barrel.

Remember in season 1 when Clarke, Finn and Finn’s best friend Lincoln had to escape the Reapers, and they saw a barrel filled with half-dead Grounders? I positively adore it when mysteries are allowed to stew, and then solved at a later date. The Reapers get their snacks from the Mountain Men! This kind of thing showcases the longevity of the storylines. The writers are thinking years in advance, setting the dominoes up as they go. Not only was this an A+ reveal, it was also truly terrifying! I think I can speak for everyone when I say we’d rather our heroine not be eaten.

Back at Arc Camp, Kane was doing some sleuthing to find out who let the Adventure Squad go. 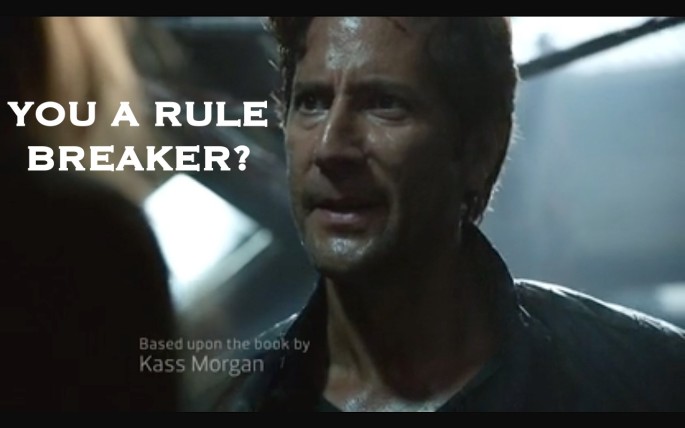 Well that was easy! I think Kane missed his calling as a detective (which is absolutely a show I would watch). I like that the show acknowledged the Kane / Abby backslide with the line, “are we really back to this?” Our thoughts exactly! 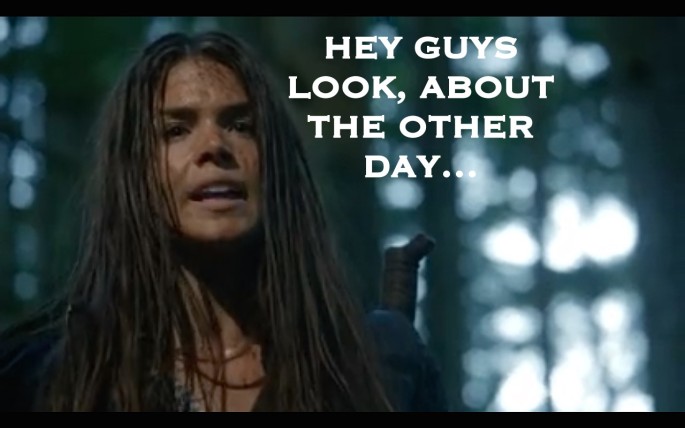 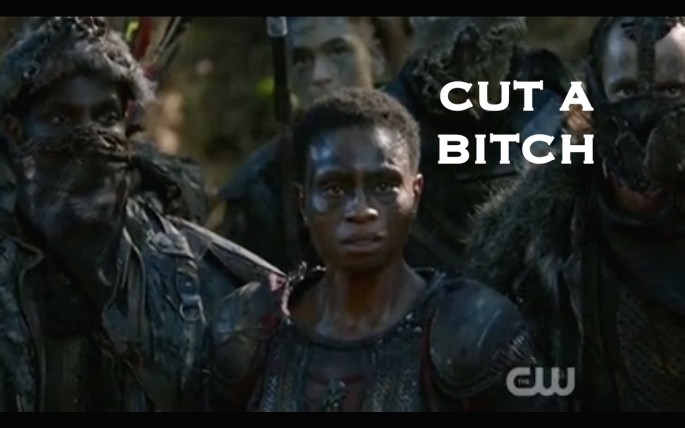 I know I’ve been saying this over and over, but I loved this! Of course the Grounder Captain wouldn’t take any shit from Octavia. It was what, yesterday that Octavia almost killed her only healer? Haha, Octavia, you’re such a rapscallion.

Before we judge Jasper too harshly, let’s keep in mind that he spent an entire season watching Octavia throw sassy doe-eyes at a chiseled statue of a Grounder. Now he’s finally getting some bona fide play and he doesn’t want a post apocalyptic adventure to get in the way.

That being said, within Monty beats the true heart of a hero, and everyone BEST RECOGNIZE.

Meanwhile, Clarke and Anya’s barrel ride came to an end. Clarke snuck a peek at the dinner menu, and was NOT pleased.

This was a very alarming situation, and I was tense the whole time. Put yourself in her place for a sec, and then for the sake of your mental health quickly stop doing that because her place is HORRIFYING.

The Adventure Squad found the Grounder camp and spied a very masculine watch. 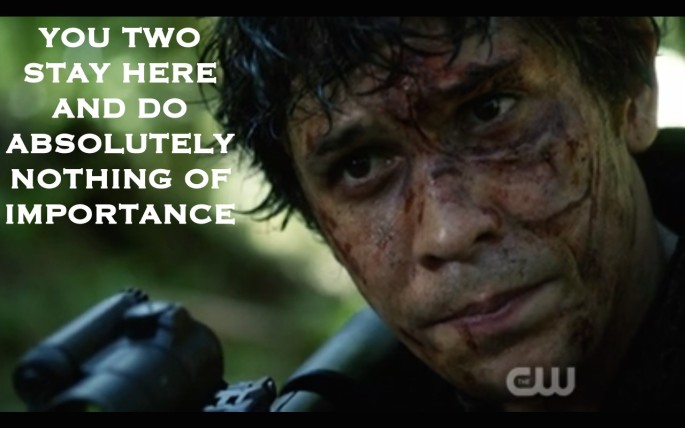 The Adventure Dudes lured One-Eyed-Willie away by clicking two rocks together. Haha, yes, that’s seriously what happened. Murphy looked so miffed at being given the LAMEST job ever.

Back at Arc Camp, Kane was presented with a difficult decision.

This lady loves order and punishment and frowning. She reasoned that because Abby is the most popular girl in camp, everyone will want to break rules like she did. Thus, she should be given a very violent and medieval punishment.

Then a Grounder was brought into camp and everyone went berserk, proving her right. Dammit, faceless mob, this is all your fault!

Meanwhile, Monty was still bummed that he hasn’t had a lot of face time with the star of the show. 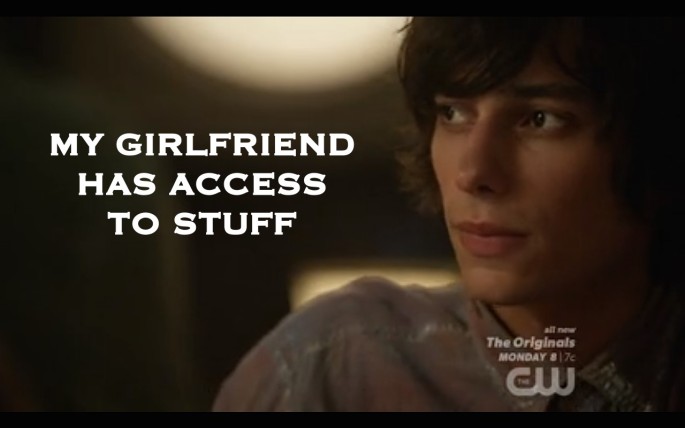 Things weren’t going as well back in Reaperville. 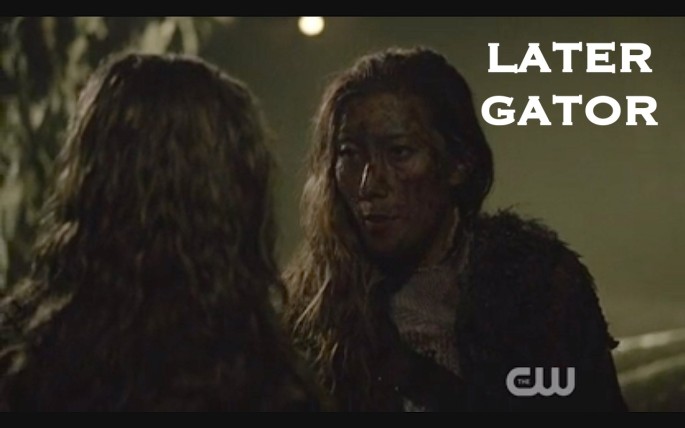 Anya peaced out on her girl night with Clarke, which was kinda rude.

Then Octavia was outed by a super awesome Grounder Captain who damn well knows when she’s being followed. 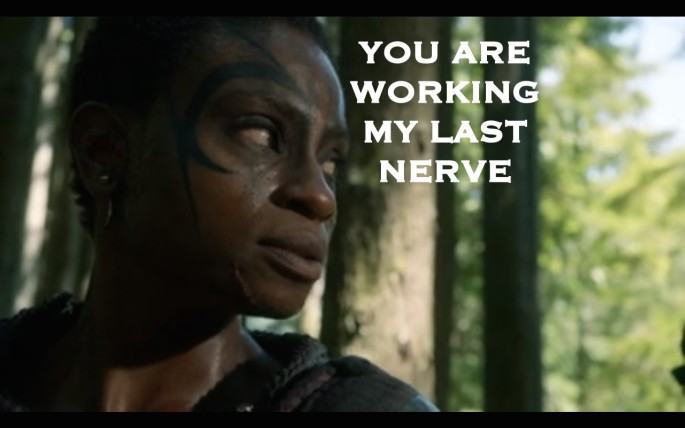 They decided she would be bait, because OF COURSE THEY DID.

Then, in yet another truly terrifying scene, Clarke was cornered by some hungry Reapers looking for munchies.

Dudes with gadgets swooped in and saved her, but it wasn’t the fun kind of rescue where you go out for poutine after. It was the Mountain Men!

I have nothing snarky to say. This scene was amazing. 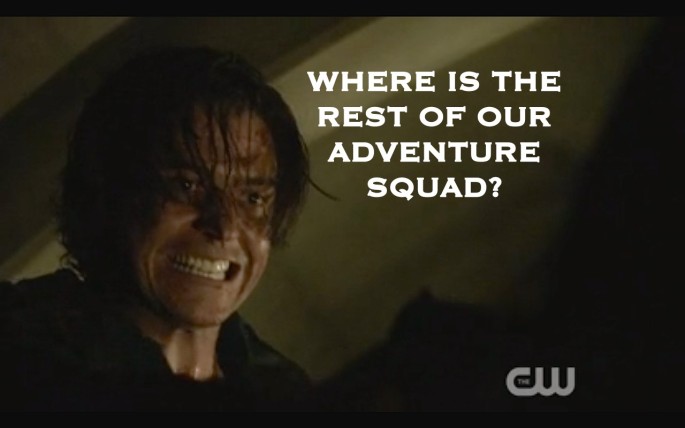 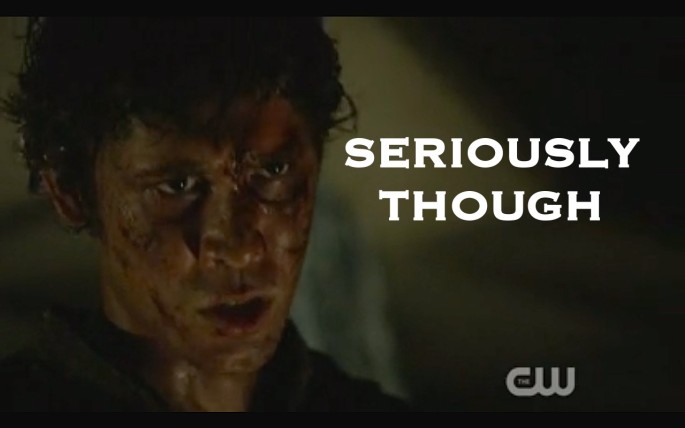 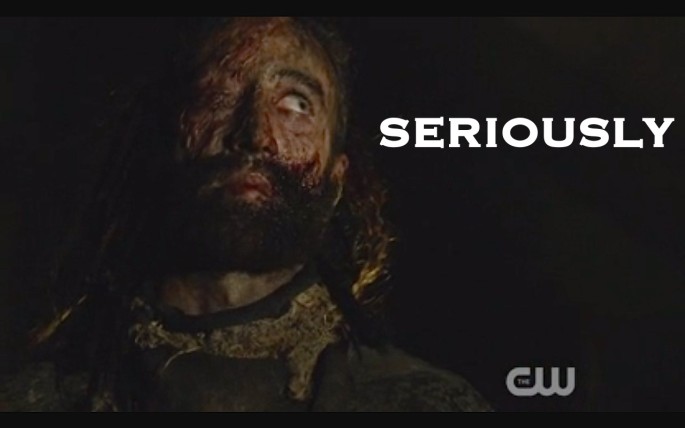 This scene was painful to watch. We know the truth of where the rest of the Adventure Squad is, so watching Finn brutalize a man for information he didn’t have was emotionally exhausting. Especially when Finn PULLED A GUN ON BELLAMY. My poor heart!

You know the only thing I’ve ever wanted out of life is a bromance with Bellamy and (ANYONE, but especially) Finn. He had better craft Bellamy some sort of whittled apology totem, because I want an epic friendship that will be whispered of for several mutated generations.

Anyway, the Grounder lied and drew them a map that probably leads off a cliff or something.

Speaking of Grounders, Octavia was kicking ass and taking names, and saved the Grounder Captain.

They didn’t find Lincoln and Octavia took her frustrations out on a tree.

Back at Mountain Manor, Jasper and Monty were getting answers from Maya.

Bah! Are Maya’s pants on fire (from lies), or is she also being lied to? Jasper gobbled them up, but Monty the Magnificent was NOT hungry for deceit.

The Mountain Minions brought Clarke back to the gate, but little did they know her bestie was waiting to FLY THROUGH THE AIR and take them out! Oh man, I actually cheered you guys, and I’m not even embarrassed about it. 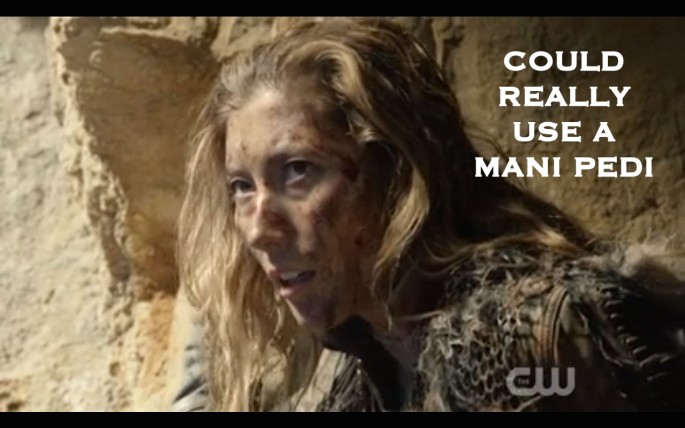 Then they jumped off a cliff like Thelma and Louise. Love these two! 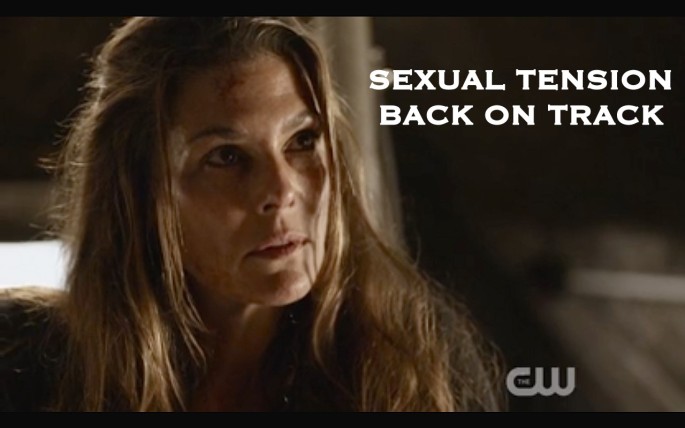 After Anya helped Clarke drag herself out of the water, girl’s night was back in full swing. 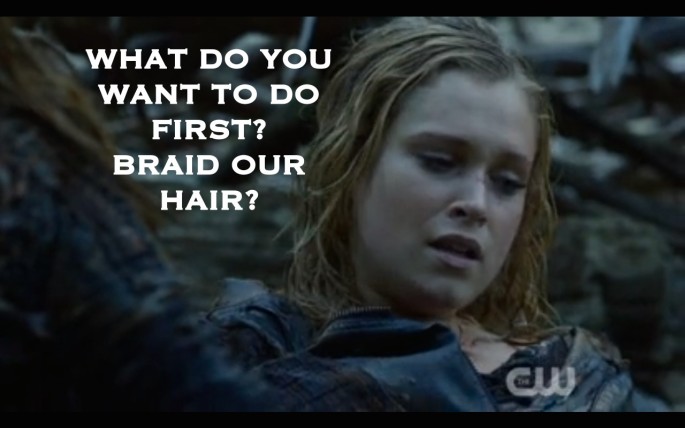 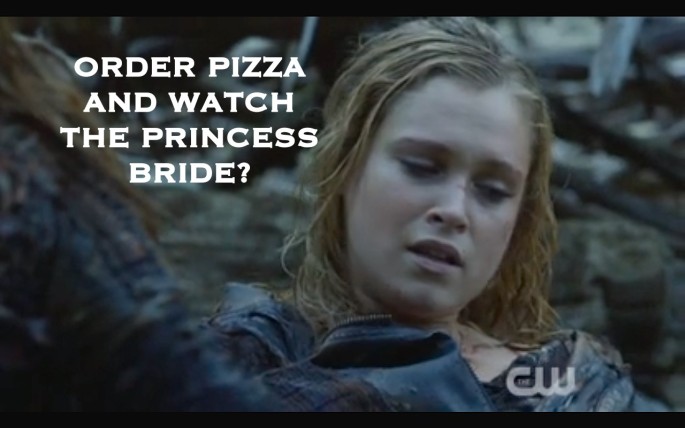 I LOVE IT! Clarke DID kill Anya’s people, of course their best-friendship isn’t going to begin immediately. That looked very realistic. Has anyone checked in on Eliza Taylor lately?

Back at the Art Supply Store, there was a moral debate going on about the pros and cons of murder.

You guys, put your hand up if this episode made your heart sing. Now put it back down because those people at the table next to you are staring.

I’ve marveled before at how The 100 keeps people in the gray area, refusing to define them as solidly good or bad. Kane essentially tortured Abby, but you could tell he was more tortured by it than she was. Bellamy, who started off a selfish shit-disturber, has always shown an unwavering value for human life, and Finn… good, sweet, annoyingly naive Finn, shot someone in cold blood.

The 100 presents a world where it’s impossible to make up your mind, and I never, ever want to!

One thought on “The 100 “Reapercussions” Photo Recap – How To Make Friends and Influence Reapers (2.3)”