No. No no no nope no thank you, NO. DID ANYA JUST DIE?

I’d like to think this was a fake-out, and that next week we’ll see her tied to a bed, a little worse for wear but otherwise alive. However, this is The 100, a show that does not mess around. I think we all know in our hearts that Anya’s fight is over.

The raised stakes is something I have always praised on this gloriously violent teen adventure, so I suppose a “bravo” is in order. But also HOW DARE YOU.

My heart has been popped like a giant floating helium balloon, then smothered in mud and stomped on by a blonde woman who knows less than Jon Snow.

Some of this episode felt like filler (saving the new girl took a long-ass time), but even this show’s filler is exciting, and everything else was pure awesome. We got Clarke and Anya (my poor heart), the world of the The 100 expanded, and not only did Wick return, but he is the best of buds with the #1 most awesome human on the planet, my beloved Raven.

Plus, (and I never thought I’d say this), I care about Jaha’s storyline (I just typed that with a straight face. I THOUGHT IT WAS IMPOSSIBLE). Let me clarify. I don’t necessarily care about him as a character, although he did make strides in this episode towards winning my affection. I simply love where his storyline took us. There’s a whole world of post-apocalypse dynamics to explore, and although it detracts from the Adventure Squad, I’m very pumped about it. We got to spend an entire season zeroed in on our rag-tag band of teen heroes. Now it’s time to see what else is out there.

You know what, why don’t I pick my battered and broken heart out of the muck, shove it back into my devastated chest and photo-recap this thing.

Not gonna lie, folks, I audibly sighed, shook my head and said, “this guy”, when the episode opened on Jaha.

If we’ve learned anything from this episode, it’s that desert grounders are initially much nicer than forest grounders.

The Mountain Minions were after them and I just can’t. I love these two so much, and now… I JUST CAN’T.

The Adventure Squad was making some progress with their futile wild goose chase because Finn wasn’t allowing pee breaks. If anyone gets a UTI, it is on him! He wasn’t pleased when they stumbled upon an improbable distraction. 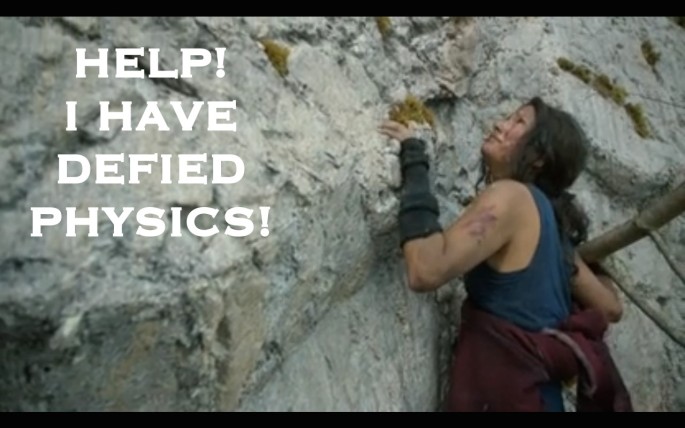 Haha, HOW? Is she Bruce Willis from Unbreakable? Did she survive the crash, climb the side of a cliff, and then get stuck? Did she jump out of the Arc before it crashed and grab onto the rocks like a mountain goat? I was immediately so confused, but then brushed these thoughts aside because our favourite bromance was hitting some turbulence. 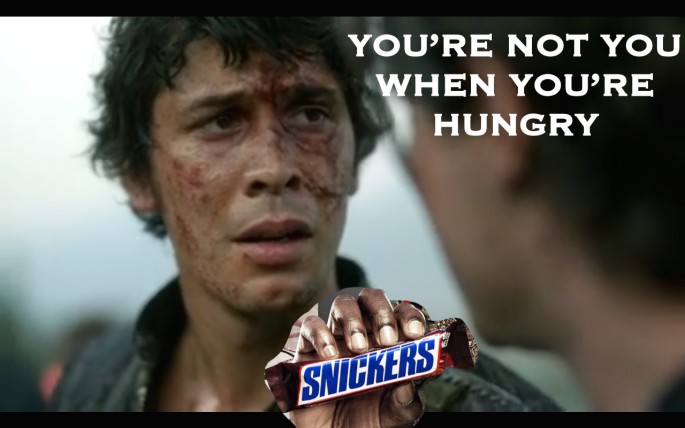 Seriously, what are these kids eating? I’d be hangry too. But you guys… LOOK AT FINN’S CRAZY-EYES. Dude is going off the deep end. It’s fun to watch, but I have to admit, I find this character turn a little over the top. I’M SORRY.

Back in the desert, Jaha was getting acquainted with his savior.

Love this kid already! His parents showed up and weren’t pleased that he was chilling with a strange man. Fair enough!

Anya believed her girls’ night with Clarke wasn’t going well because of Clarke’s smell. This is always a sensitive subject to breach with a friend, so she did what anyone would do in her position. 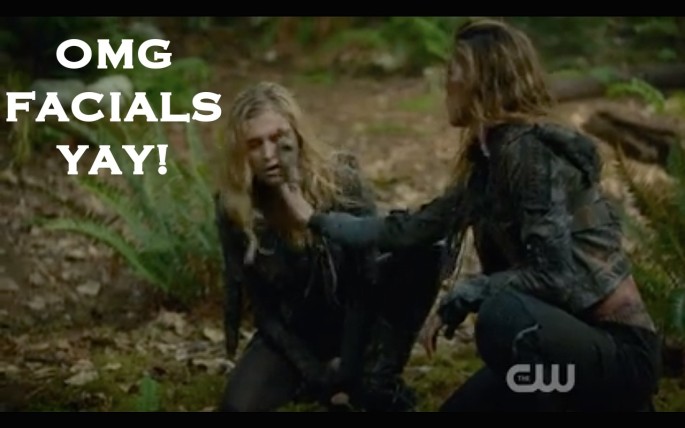 Meanwhile atop a cliff, a plucky extra was fixing to be a hero! 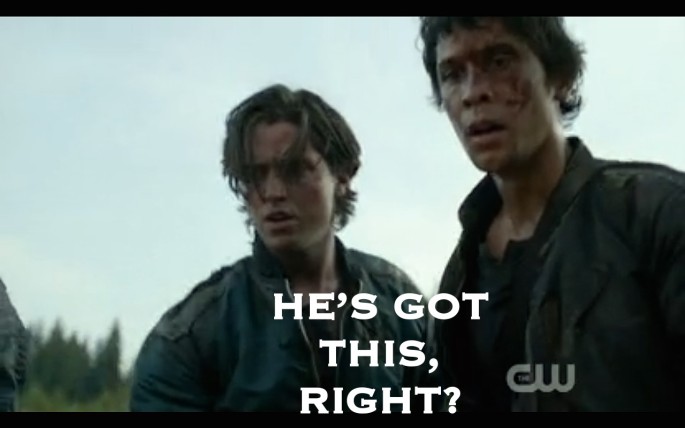 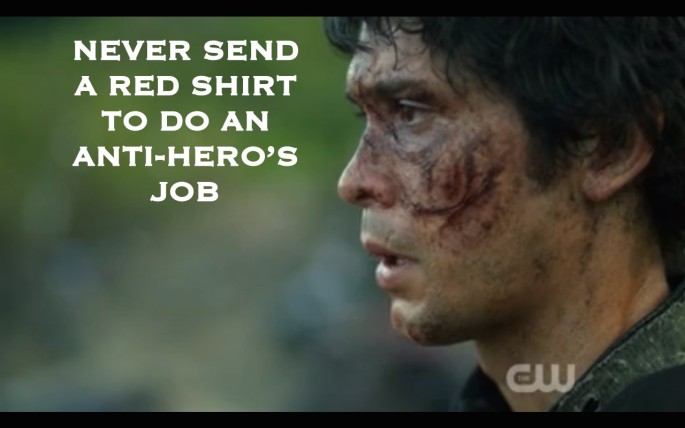 That was amazing. No one is safe, not even an adorable glorified extra! Seriously, though, this show loves to blast our expectations away. I was prepared to like this guy. I was on board with learning his backstory and having him grow into an actual character. NOPE! Farewell Red Shirt! Be thankful you got an awesome death. 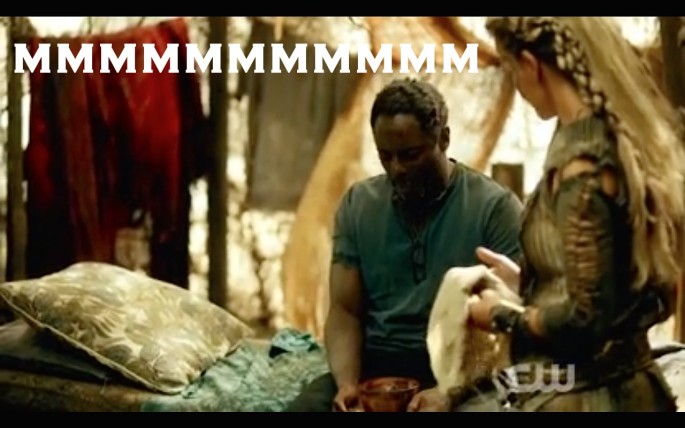 Does someone in production really like Fear Factor? This show loves making people consume bugs in some way. Sidenote: do you think Jaha has ever seen a bug before? Are there bugs in space? Anyway, these fine people are headed to the “city of lights”, which I’m sure isn’t important.

Then Zoran came back, and Jaha did NOT react well. 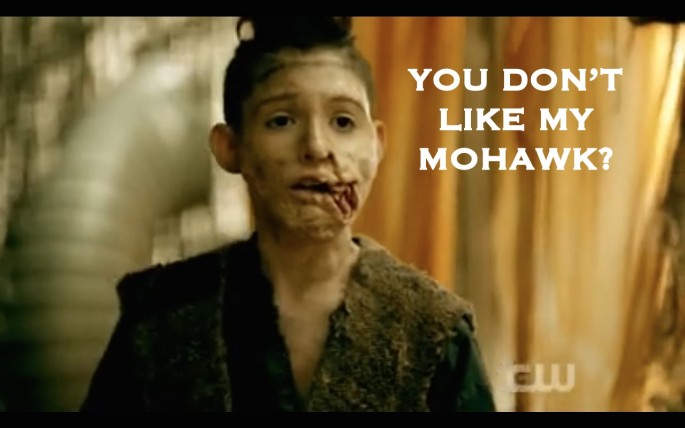 Commander Data gave Raven a job to make a beacon, and look who was her work mate! 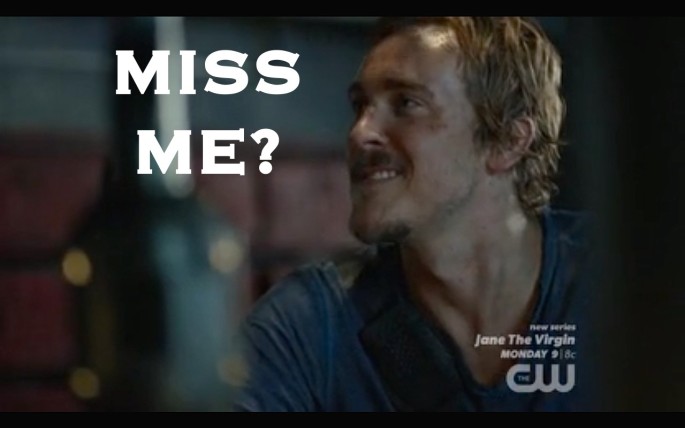 Yes, Wick, we did! It would have been easy to write Wick off as someone who died in the fall to earth. That would have been the wrong move, because this fellow is a delight. And as if his appearance wasn’t enough of a precious gift, he already has a rapport with Raven. High fives to everyone.

Girl’s night hit a snag when they realized Anya had a tracker in her arm. 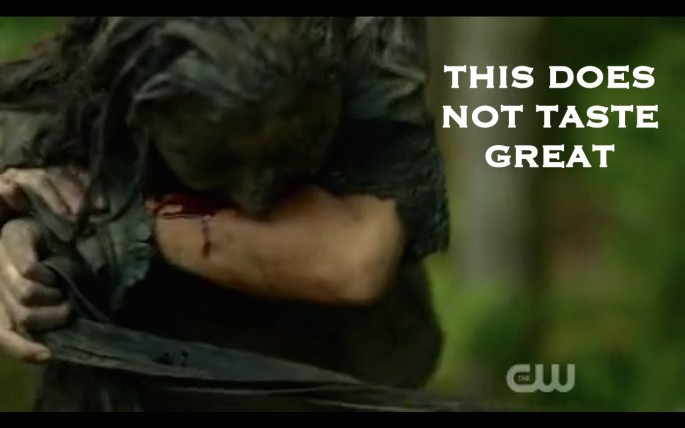 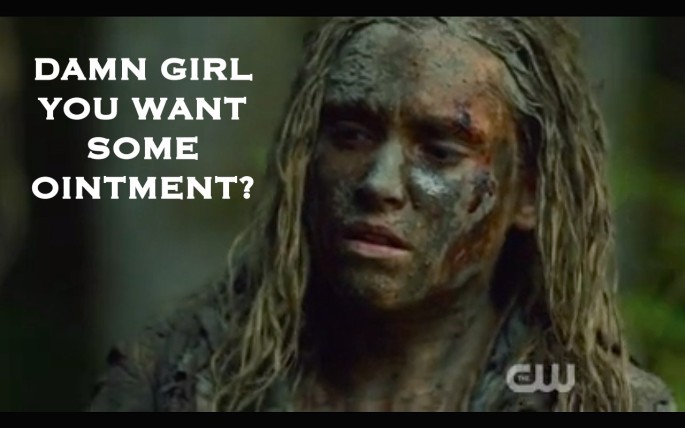 ANYA BIT IT OUT. Sorry, in case you didn’t catch that, she fucking BIT. IT. OUT. That shit was brutal and amazing and gross and awesome.

Of course we’ve learned this episode that being a fan favourite means NOTHING! (I’m obviously still upset).

Raven was being rather stubborn, refusing to use Wick’s brace, and insisting she do everything herself.

You all know I hate to see Raven in any kind of distress, so this was hard. It was also very well done. It’s difficult to accept a significant change in your abilities, and this scene portrayed that poignantly. Bless Wick for not trying to stop her.

Things weren’t as beautiful back on the cliff with our Adventure Squad, as their makeshift rope snapped and Grounders started shooting at them. Quick question – since when do Grounders miss? 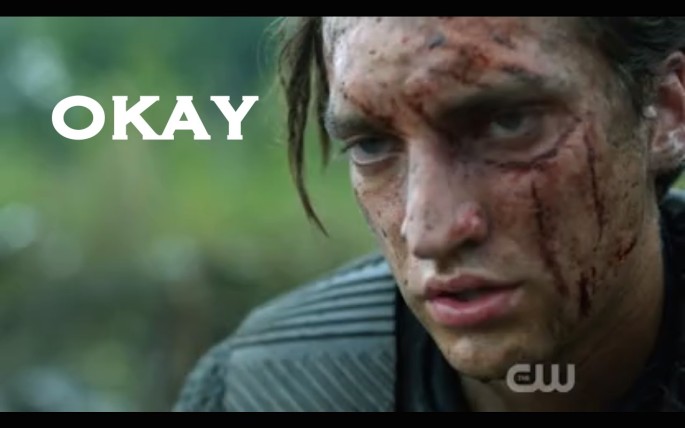 These two! This moment was great. Remember in the first half of season one when all the Beautiful Creepster wanted was a little approval from his surrogate big-bro?

There was also a small yet hilarious moment when the new girl flopped onto Finn and thanked him. Hahaha, Finn didn’t even want to save her! Bellamy did all the hard work! Even when Finn is being a dick, he still gets all the ladies.

The acid fog horn went off and scared all the Grounders away, but it was all subterfuge! There was no fog, just everyone’s favourite Grounder Pounder!

As fun as it was watching Octavia assimilate with the Grounders and kick some ass, I’m glad she’s back with her brother. These two have consistently been the true heart of the show.

Back at Arc Camp, Raven was feeling in the dumps. 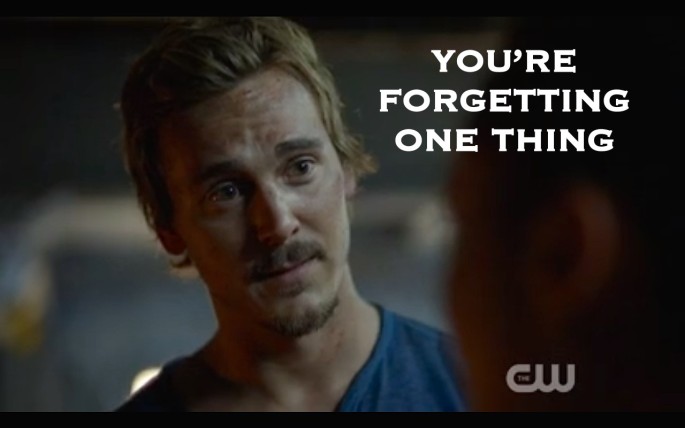 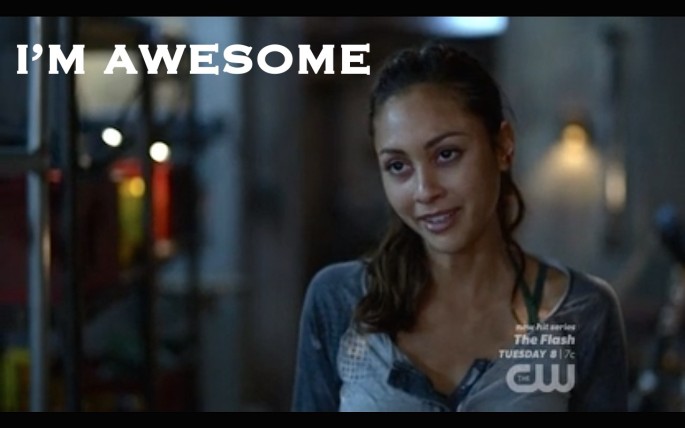 Wick gave her a charming pep talk and she used the brace. Yay!

Jaha had a moment with Zoran where he proved he’s not bigoted against mutants. If we’ve learned anything from the X-Men movies, it’s that not everyone accepts people who are different.

That song is going to be in your head for the rest of the evening. I’m sorry, but it had to be done. 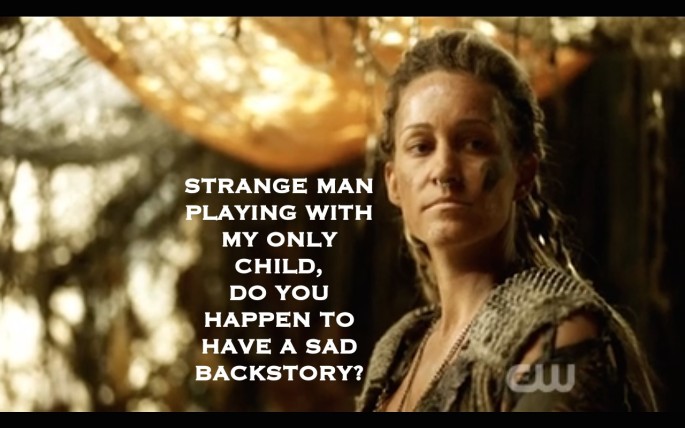 On the other side of the country, girls night was taking a turn for the worse.

Clarke stuck a tranq dart in Anya’s neck!! Oh man… we’ve all been there, ammiright?

The Adventure Squad decided to split up because the Red Shirt may have been poisoned. Octavia stayed with Bellamy, while the Beautiful Creepster joined Finn. 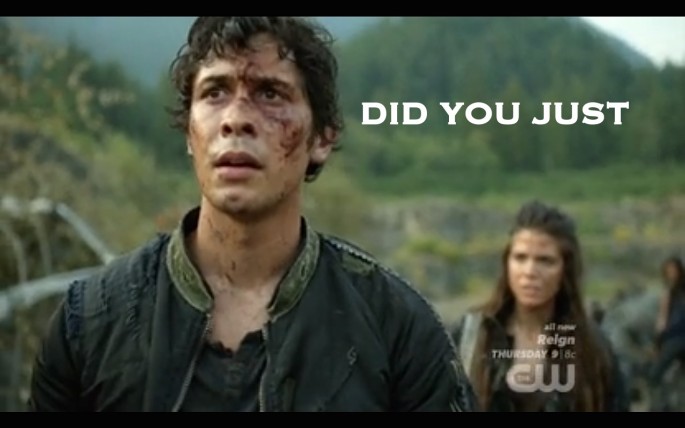 Clarke dragged Anya to the dropship, where they engaged in an epic brawl. At this point I would like to point out that I use the word epic quite a bit. “That fellow has an epic mullet”. Or, I could devour an epic portion of ice cream right now”. Or even, “I just had an epic battle with an insect in my shower and it won.” I tell you this because in this moment I feel I have been remiss. Nothing in my life thus far has deserved the word “epic” until this very moment. These two ladies did NOT hold back! At one point Clarke hit Anya over the head with the skull of one of her burnt-up compatriots!

Clarke got distracted by the genius balloon beacon and decided to head to her people. Of course, at that point Captain Frowny McYellsy shot it down and ordered the guards to shoot on sight, which is a super move when you have people outside who may be drawn home by the beacon.

Meanwhile, Jaha had been sold out by his gracious hosts.

Jaha was very chill about all this. He walked out to the “bad man” and we all watched as he was knocked out. Right? He’s not dead. Is he? Who the hell knows! The 100 loves to mess with us, so it is honestly anyone’s guess (secret wish).

Clarke and Anya showed up at Arc Camp and decided they would work together to defeat Mount Weather.

And then the episode ended and nothing bad happened and everyone was happy.

So, you guys got any big plans for the weekend, or…?

This episode, while not as mind blowingly amazing as last week, was pretty damn good. The story lagged a little on the cliff, and we spent a little too much time with a character we haven’t felt connected to since season 1, but it was exciting and mostly fun. Plus, Wick is back!

It also served as a propelling agent, setting up some pretty nifty stuff for next week.