WHAT KIND OF A SHOW DOES THIS? What… kind of a… my poor heart can’t even… WHAT IS HAPPENING?

How are you guys doing right now? I know I asked that last week, but I feel it’s important to check in yet again. This season may have started on the slow side, but things are cooking (he he) now, with no signs of letting us catch our emotional breath. DEAR ZEUS THE EMOTIONS. Jasper. Monty. My boyfriend Sinclair. Harper. Raven. My boyfriend Sinclair. A Blake sibling hug. Clarke struggling. MY BOYFRIEND SINCLAIR.

Raven is aliiiiiiiiiiiive! For those of you who aren’t theatre nerds, the rule of “Chekhov’s Gun” is that if a gun is introduced on stage, it must go off. This can be applied to many-a-thing, such as, oh, I don’t know, ROCKETS. If a rocket is introduced in a show, it must jettison into the atmosphere. The thing is, you guys, I AIN’T MAD. If the rocket sitting unused means our beloved Goddess Raven survives, then I’m on board. Plus, there are two episodes left, so it may come in handy yet.

So, Raven lived, and Jasper did not. Rest in jokey peace, Jasper, where ice cream is plentiful, and quips abound. I know some commenters had lost patience with Jasper, but I always thought his was an important point of view to explore in this post apocalyptic hellscape. There had to be someone who couldn’t deal with the horrifying nightmare that was life within the world of The 100. Thank you to Devon Bostick for taking us on his journey, but more importantly, for the quips. You are a talented, handsome delight, and you will be missed.

I know what you guys are thinking: “Toni, enough about all this nonsense, get to the REAL tragedy of this episode!” I know. It’s just too painful to talk about, and I don’t know if I can bring myself to type the words… *deep breath*. Ladies and Gentleman, friends and fellow The 100 fans… Riley is dead. Riley, everyone’s best friend, the true hero of this tale, and the most compelling character on the show, has died. I’m sure there will be multiple support groups to deal with this, and please, by all means, use the comments section to discuss your grief.

In the meantime, let’s dive into this recap like it’s a freezing ice-water coffin, shall we? The Other Side began the moment last week’s episode ended, with Bellamy learning of Skaikru’s douchery. 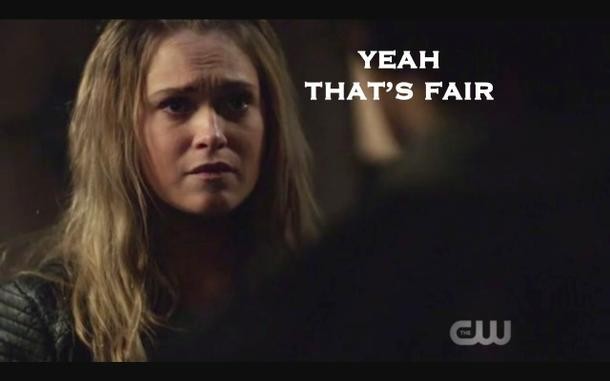 Clarke was at least sorry about it, whereas Newj was all, “aren’t we just the best? This is the greatest plan, top marks everyone, high five, this is so awesome and so are we.” Ugh with this guy. Then Abby came in looking for her love interest, and things got so awkward. 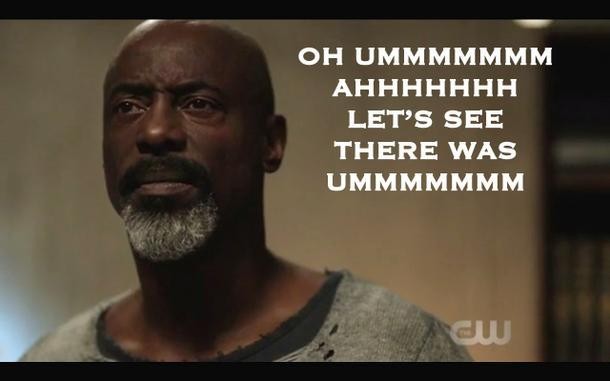 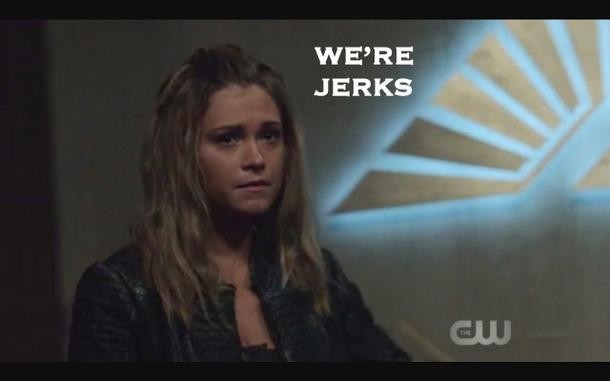 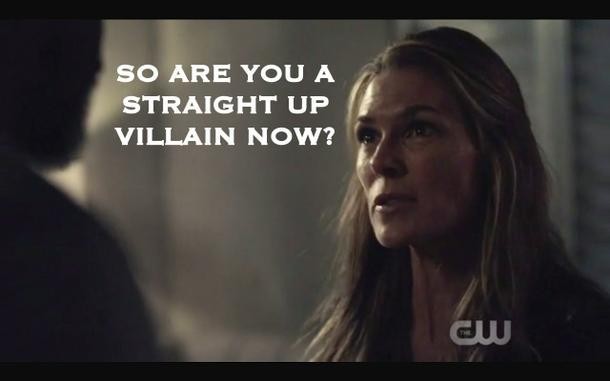 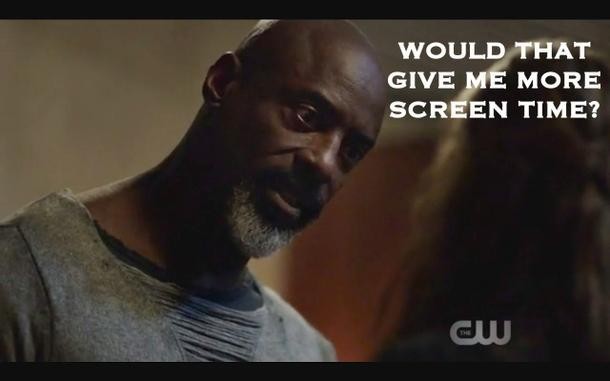 That’s right folks, Jaha is Jaha again. Newj was a man who disappeared for seasons 2 and 3, then returned all wise and kindly. This douche is most definitely the same guy who tried to overthrow Abby, then lead a dozen people to their deaths due to his own hubris, fed a teen to a sea monster, and wasn’t even sorry about it.

You guys, what if… and I don’t want to jinx it by typing it out loud, but… what if The 100 is setting up Jaha to be the season 5 villain? We all thought he was being lead down a road of unearned redemption, but what if that was a misdirect? The thought of this has me so damn excited I can barely finish this entire pizza.

ANYWAY, Clarke let them play with the radio, and they had a conversation that went a little something like:

Octavia: I’m the best. You guys missed a great ep last week. I was so damn kick-ass, and everything was very tense and exciting. Oh, and I’m uniting the clans like some kind of mother of grounders. Take THAT Game of Thrones!

Bellamy: Whoa, cool, anything you want from down here before I come up to let you in?

Octavia: Yeah, maybe some gummy bears or something? Surprise me. Just not fuzzy peaches.

But then Jaha returned with some guards (including Miller!) and they buzzed Bellamy and locked him up. 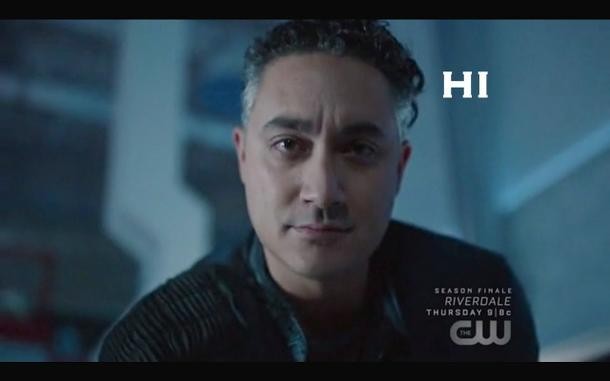 It was my boyfriend Sinclair! If you’ll recall, the last we saw of Sinclair he was brutally murdered by Emerson, and his last words were urging Raven to run away and let him die. So. Yeah. Pretty happy to see that he’s the angel on Raven’s proverbial shoulder.

Then something happened that I’m not sure I can bring myself to talk about, but I’ll try… Monty was still trying to reason with some suicidal teens, when they found one of those precious teens was already dead. 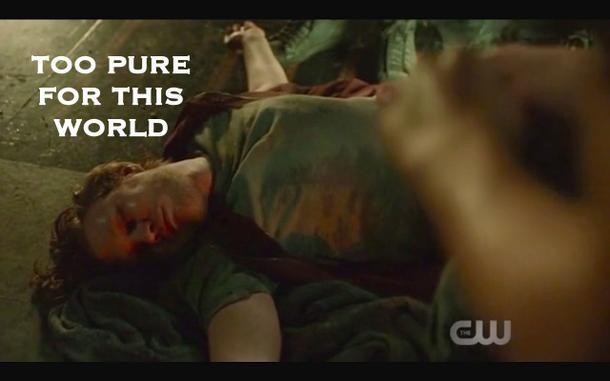 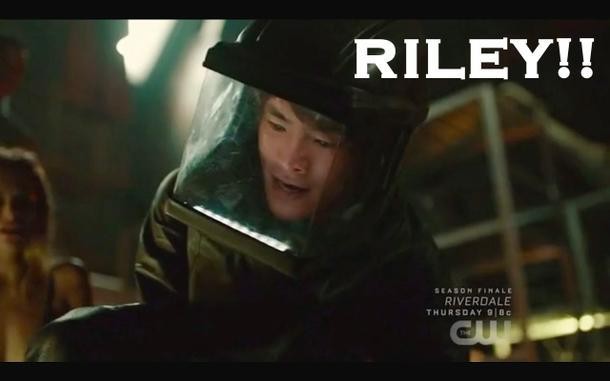 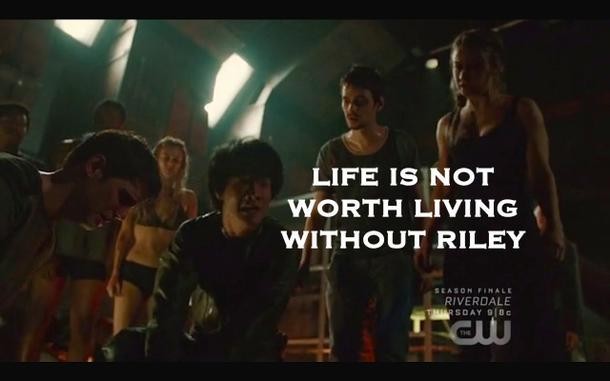 Rest well, fair Riley. You will forever be in our hearts. Your rich and meaningful backstory shall be written in the stars, because it certainly wasn’t written anywhere else. (BURN!)

Then Jasper sped up their suicide pact timeline, and in my head I was STILL all, “Monty will save him, NBD.” #Fool

Jaha (ugh), Clarke and Abby had a fun meeting where they talked about what assholes they are, but how it’s okay because of reasons.

Anyway, they needed someone who would choose survival over being liked, so… 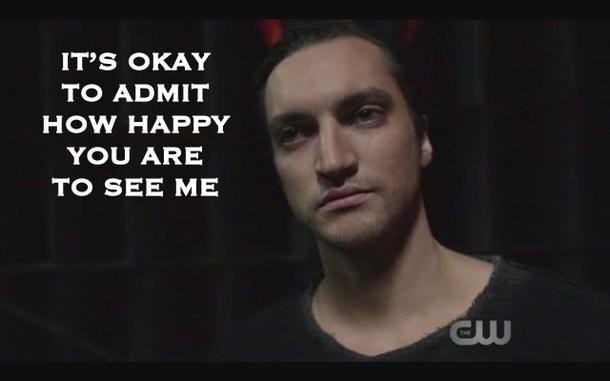 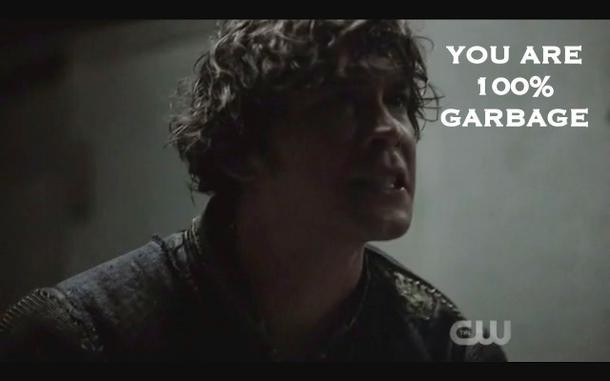 The Beautiful Creepster is a survivor. He and Clarke aren’t wrong in wanting to keep the doors closed, and Bellamy isn’t wrong in wanting them open. Once again this show presents us with a situation so grey it’s impossible to know what side we would be on if it were us. Would you risk your spot to do the right thing?

Back at Ark Camp Harper pulled a White Fang and tried to tell Monty that she didn’t love him, so that he’d go on living without her, guilt-free. 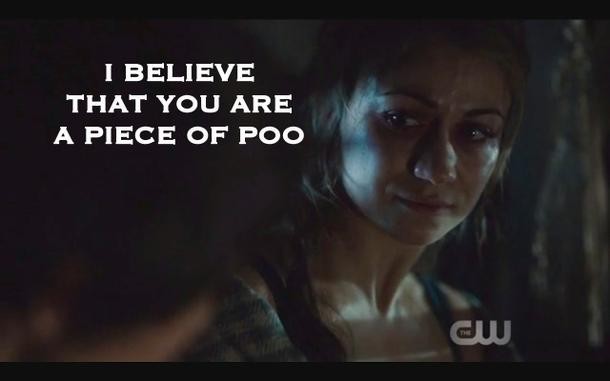 She wasn’t very good at it, and although Monty looked VERY sad, which hurt my heart, I don’t think he bought it.

Meanwhile, Octavia and Indra were hanging out waiting for their gummy bears to arrive, when a sassy assassin rocked up to see what the hold up was.

Echo threatened to tell everyone about the Skaikru douchebaggery, but Octavia was all, “um, we’re not the only douchebags on the block,” pointing out that Echo broke all the rules last week. But then they came to an agreement to chill out, and everything was fine *wink*.

Meanwhile, Raven was exhibiting some severe split personality behaviour, and it was awesome. 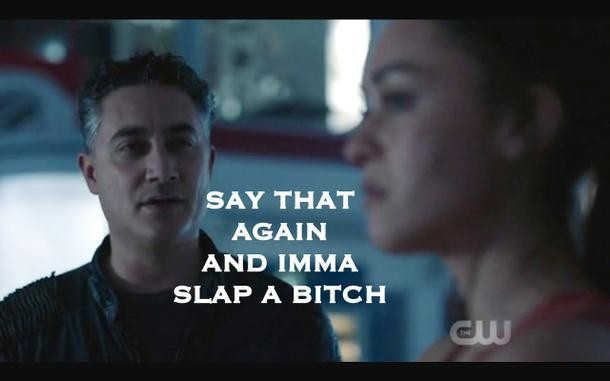 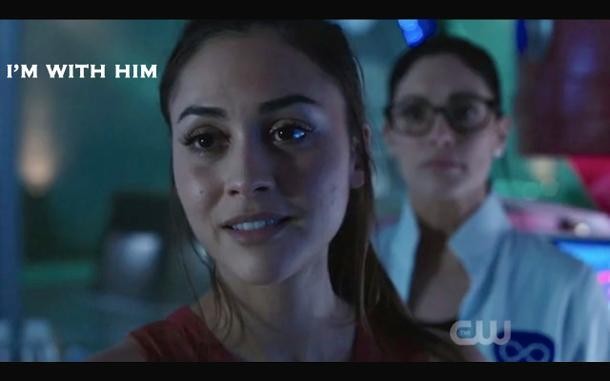 Operation Save Raven’s Brain was afoot! 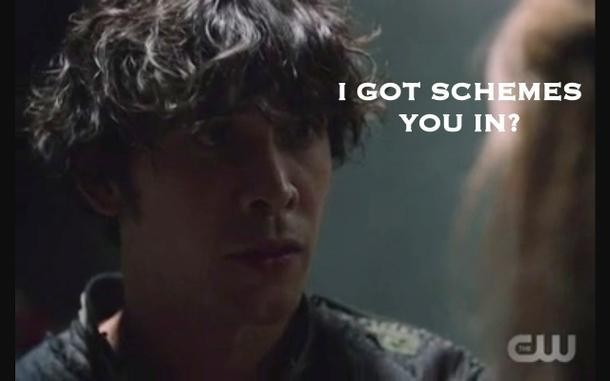 Bellamy’s injuries were on purpose so that Abby would come down to “treat” him and together they could further the plot. Abby gets a lot of flack (especially from me #SorryNotSorry) for making decisions with her heart instead of her brain, but this show needs someone like her to balance things out. In this case I was rooting for her, which is rare, so let’s enjoy it.

Anyway, her and Bellamy subdued Murphy hilariously gently, basically laying him down on a bed of soft feathers, stroking his hair and whispering “goodnight, sweet prince” before kissing his forehead and tiptoeing away.

Clarke and Niylah had a nice chat where Clarke defended her decisions and made us all feel bad for being mad at her last week. 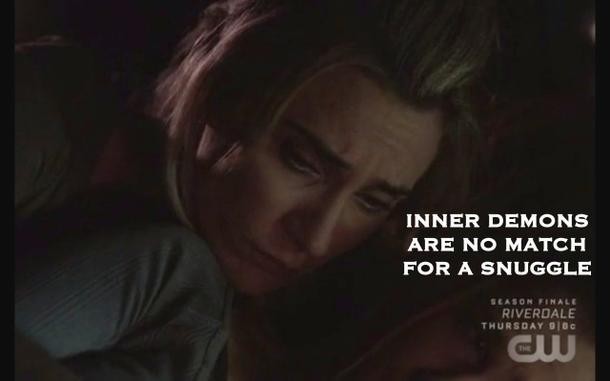 Niylah is so damn cool. 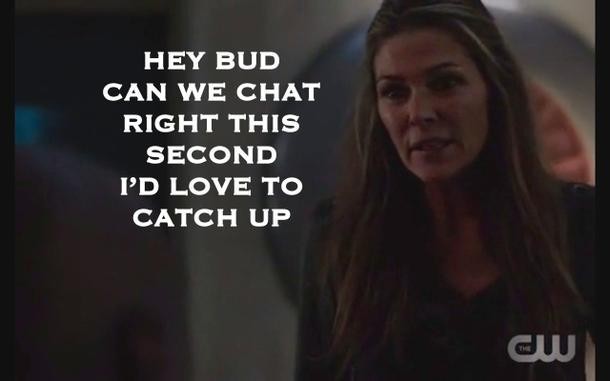 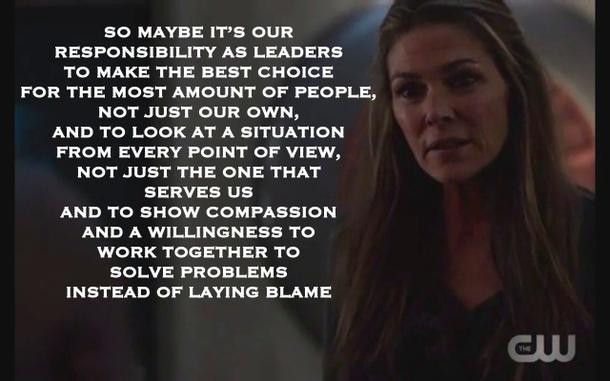 They argued about morals for a bit before Abby stuck him with a sleepy-time stick and he took a nap. Abby fiddled with the computer while Bellamy went to manually open the door. But look who was hip to the wise! 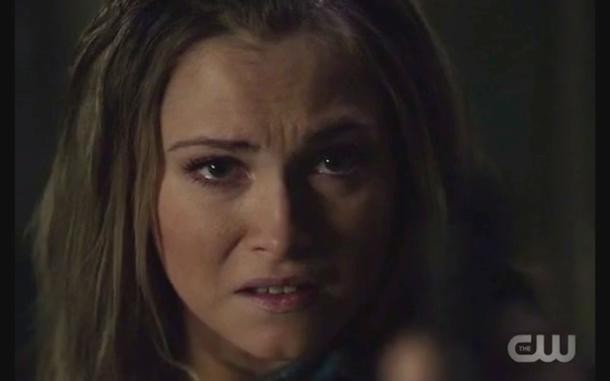 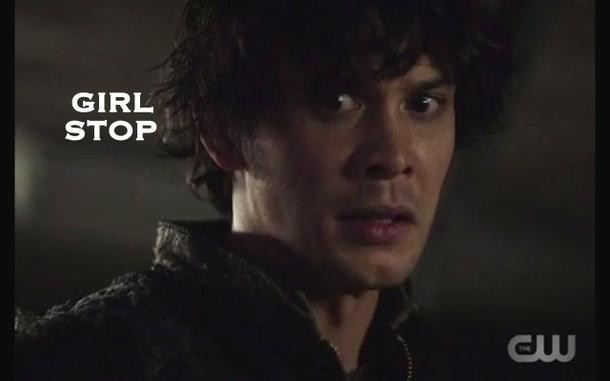 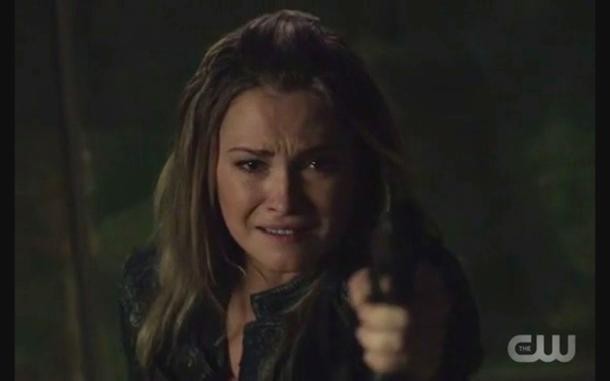 He basically told her that the ball was in her court. He was opening that door, and she could kill him if she wanted. OF COURSE she couldn’t. Sorry for doubting you, shippers. Won’t happen again (OR WILL IT?). [Of course I, in no way, am saying that the only reason she didn’t shoot Bellamy is because of some romantic motivation. I truly believe Clarke wanted to open the door, she just needed a little push. Plus, sometimes people just don’t want to shoot their friends, you know?]

Then this happened, and it was glorious: 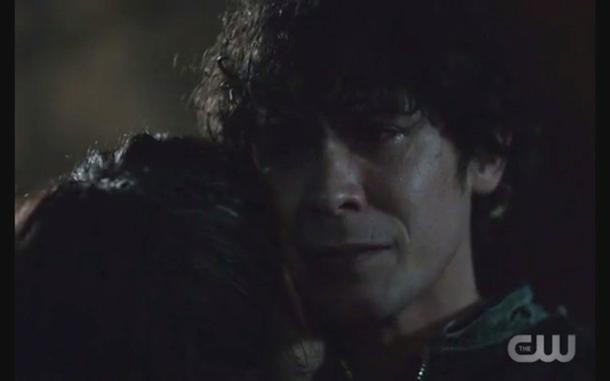 Oh sweet beautiful majesty. We have been waiting for this particular hug for TWO SEASONS. Oh man. The Blake siblings are BACK IN ACTION, PEOPLE!

HAHAHA ECHO! Octavia impaled the last guy who killed one of her love interests, and you think she’s just going to let you into her bunker??? Hahahahhahahahhahha BUB BYE. (For real, though, I hope we see Echo again. Love her sass!) 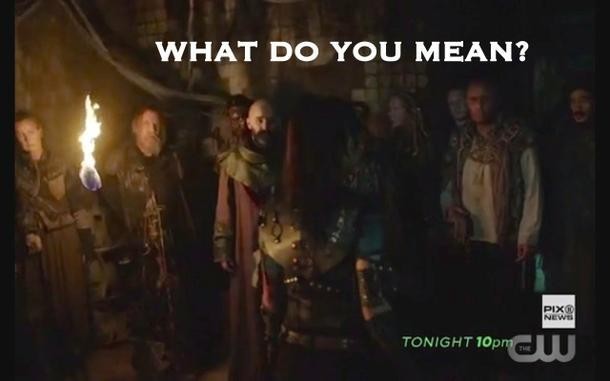 So the bunker is full-up! All the clans sent 100 people to survive, and now Skaikru has to do the same. Didn’t Clarke make a handy list for such a situation? I wonder if that will make a reappearance in the near future, or if they’ll start from scratch.

Back at Ark Camp, Jasper had too much of the nut tea, and Monty found him moments before he died. 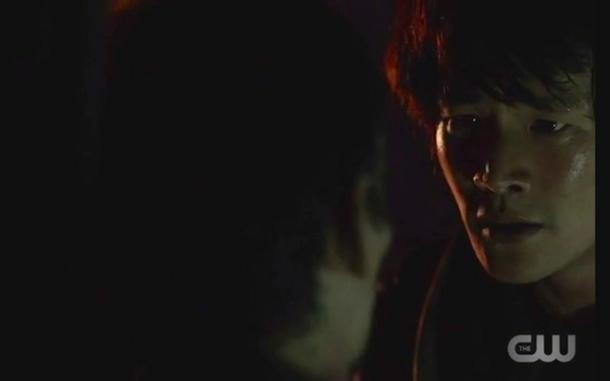 You guys, I can’t. This scene was too beautiful, too sad, and way too damn moving to ruin with my bullshit snark. This made me sob TWICE (once while I watched it as a viewer, and again as I tried to recap it). The Jonty bestfriendship has been a staple of this show since the pilot, and it was truly heart wrenching to see it end. Both boys nailed this scene – Christopher Larkin playing the perfect line of anger and grief, while Devon Bostick oozed peace and love for this friend. Also deserving high fives are the writers and director [who I later learned was Kane himself – Henry Ian Cusick!], because this scene was gosh darn gorgeous, and the words were perfect.

The 100 follows through on its promises, and Jasper has been wanting to die since the day he smiled while an Ice Capade slit his throat. It would have been disingenuous for him to change his mind in the final moments. This is what he wanted. So, I shall say one final time, you do you, Jasper.

ANYWAY. *loudly and obnoxiously blows nose*. Monty rushed off to find Harper in HER dying moments, but she was all, “psych!” because she hadn’t drunk the tea.

Back at ALIE Island, Operation Save Raven’s Brain was in full swing. 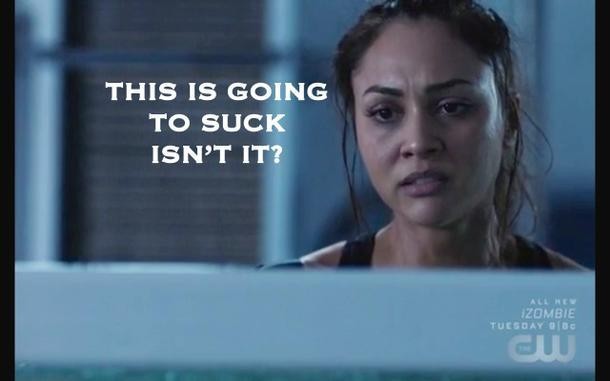 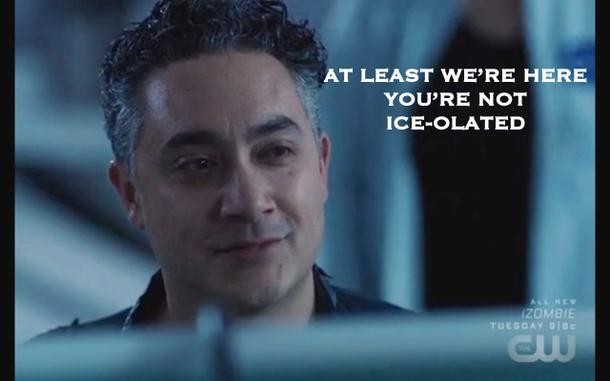 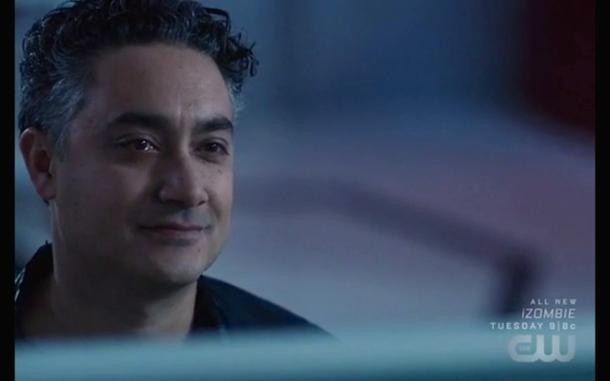 And then she put her hand on the glass, and my boyfriend Sinclair put HIS hand on HER hand, and then Raven DIED, and it was very emotional! Then she woke up experiencing a touch of cardiac arrest, so she flopped onto the floor and dragged herself to the EKG machine and shocked herself. No big deal.

After the heartbreaks The 100 fandom has suffered these last two weeks, we could notlose Raven. And we didn’t have to! Huzzah!

Back at the bunker, everyone was pretty calmly working shit out when Jaha threw a temper tantrum because not all of his people would get to survive, even though he was in the exact predicament all of the clans were in.

I am so in love with Octavia. She shut Jaha down so hard, then waltzed out all, “figure it out.”

SO. There we have it. The bunker is filled to capacity with 100 members of each kru, and Skaikru has to get their shit together and decide who gets to live and who has to die. Who of our beloved Adventure Squad will make it to Season 5? Bellamy gets a spot according to Octavia, but with 2 episodes left in the season, that’s not a guarantee.

What did you guys think? Were you Team Abby or Team Jaha? Are you throwing a party because Raven survived, or are your eyes still leaking because Jasper died? Do you love that the show lives so far in the grey it’s impossible to tell the heroes from the villains? Do you miss Roan? Have you built a shrine to honour Riley?

TELL ME ALL YOUR FEELINGS.

Fine, I’ll be the one who has to say it – Miller’s beard is out of control. 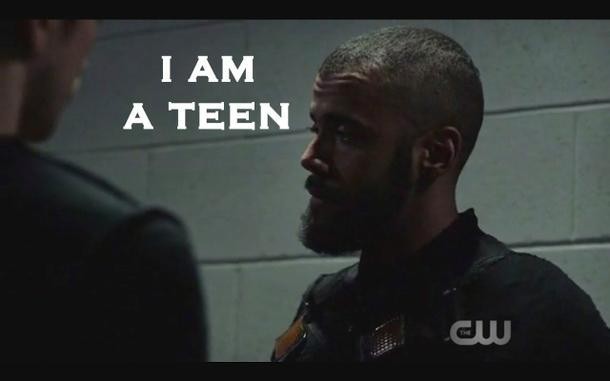