Guys, don’t get mad, but I was real pumped when the adorkable nerd got a spear through the heart in the pilot. NOT because I wasn’t fond of him, quite the contrary, actually, I really liked that kid! Or I should say, like, because he’s still alive.

So why, you ask, did my chest tingle in that special way when it seemed as though he was brutally murdered? The answer, my friend, is stakes. Killing that kid in the freaking pilot raised the stakes to a very exciting level. The danger is real! Anyone can die! It doesn’t matter how likable they are, Earth is NOT fooling around, so they better get their shit together!

*sigh*, alas. I suppose the good news is that we get more of Jasper, who, let’s face it, is simply charming to watch.

But I’m getting ahead of myself. Let’s start at the very beginning! (A very good place to start!) The episode jumped in where we left off in the pilot. Jasper had just been impaled, and our adventure squad was high tailin’ it the heck outta dodge. They stumbled (literally) upon some bones just hanging out on the forest floor. 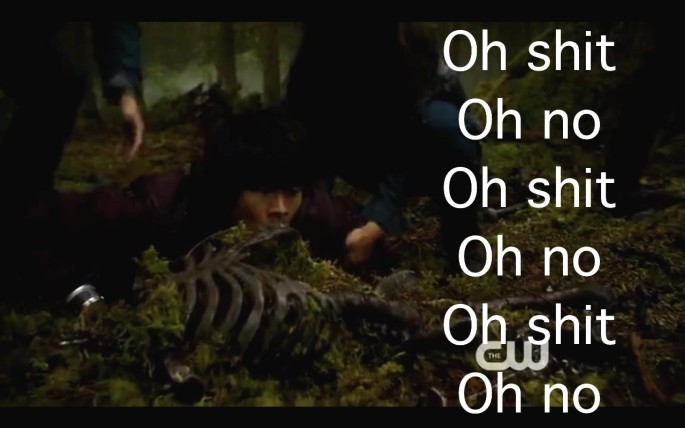 Then our heroine heard the distinctive cries of an adorkable nerd who evidently was NOT dead.

Who was dragging him? A MYSTERY, that’s who.

Back in space, Clarke’s mom was convinced the kids were still alive, despite all scientific evidence. That, my friends, is what we call “gumption”, if not “intense denial.” But of course, in this case, she was right! 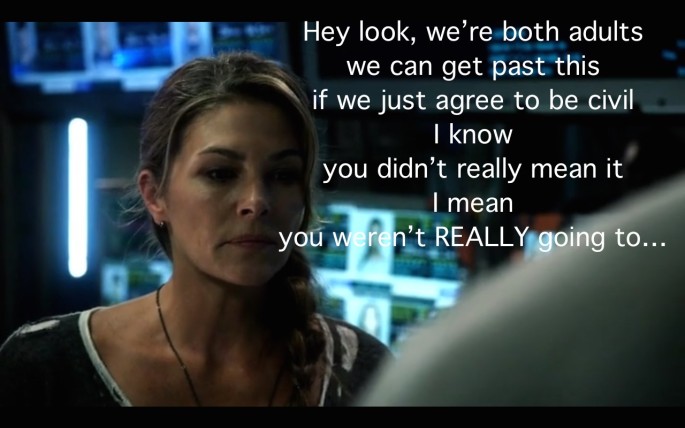 This was a hilariously awkward moment between the evil politician and Clarke’s awesome mom. I guess that’s what happens when you fail at murder. Man, oh man, if I had a nickle for every jazz bar I now have to avoid because of this…

Then the chancellor saw that his son’s square was dark.

He started to have second thoughts, but it’s too late now. Also, remember in my last review when I was all, “ugh, chancellor is way too annoying to type, can’t wait till I know his real name). OH, how I LONG for those days! What the hell is his name? Collonius? Pollonius? I watched her say it like four times and I still don’t know.

His wiener son was making himself useful digging graves. Quick question, how much time had passed since we last saw him? His ankle healed FAST. I mean, last episode the dude couldn’t stand and now he’s just strolling through the teen camp, taking in the teen sights. 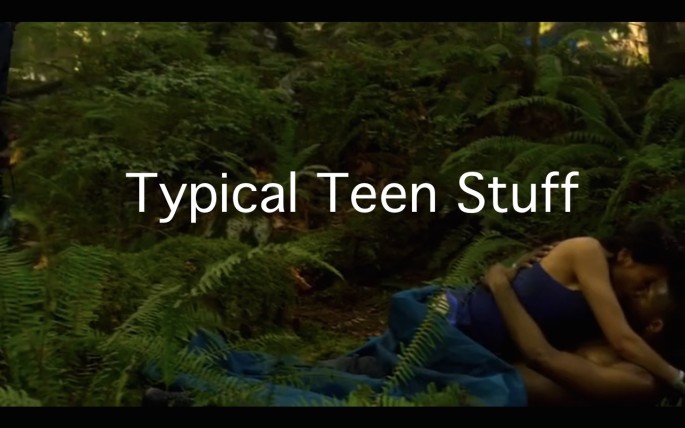 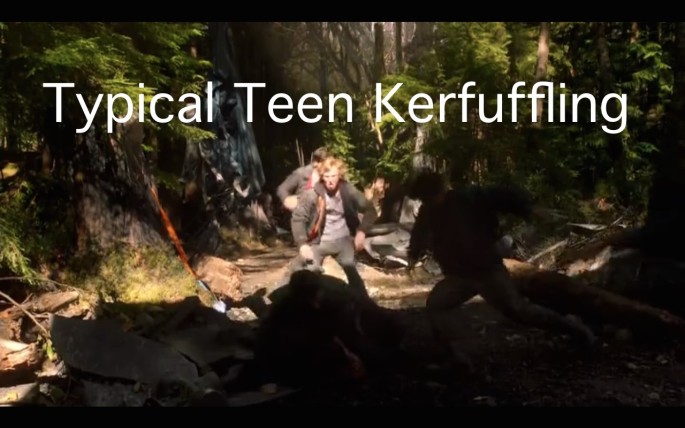 I feel like we’re really getting insight into the minds of the writers here, and what exactly they think teens do on a day-to-day basis.

Wells had a run-in with the murderous brother (honestly gonna take a while to learn names, guys), where he reinforced that rules don’t apply. For example, if wearing a shirt was a rule, then it DOES NOT APPLY.

I love that his henchman was just gazing at him with sheer approval. Oh teens! Then the world got a whole lot better, because look who was gracing our eyeballs with his beautifully creepy presence:

He said it was better if they felt pain before taking off the wrist bands. Ha! What a little gremlin! Anyway, Wells was NOT having it, and that lead to a… 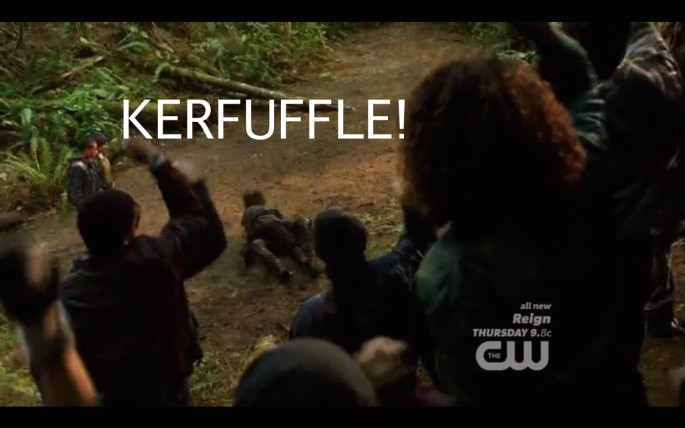 And the brother was LOVING IT. 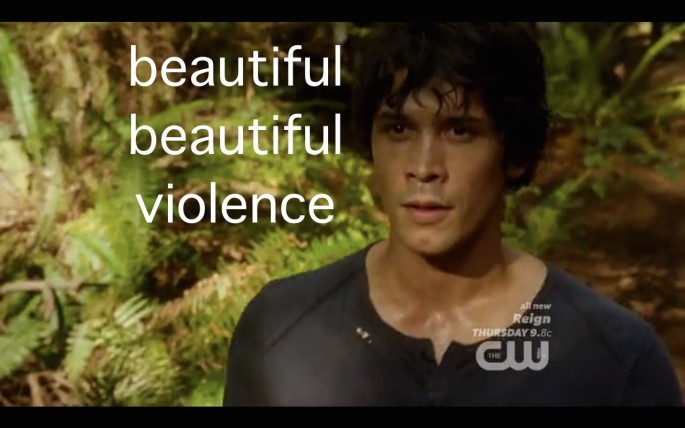 In a shocking twist, WELLS WON.

Huh. Maybe not such a wiener, after all. But of course Clarke showed up and put an end to any and all backbone Wells may have been showing. 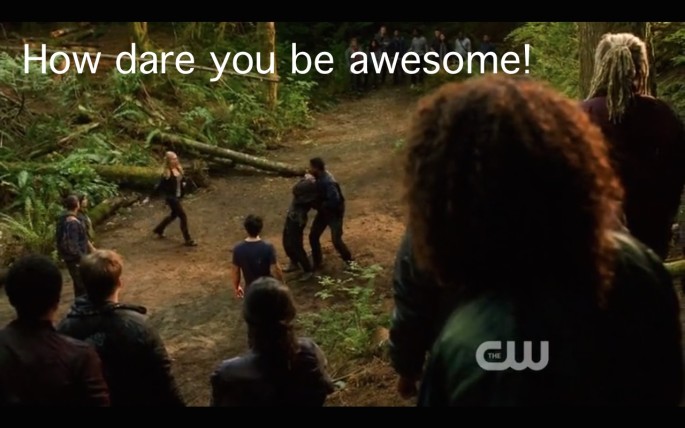 Then, in a rousing speech, Clarke shared the story with the rest of the class.

Buuuuuut, the evil brother ALSO had a great argument:

Above them, yet another compelling argument was taking place: 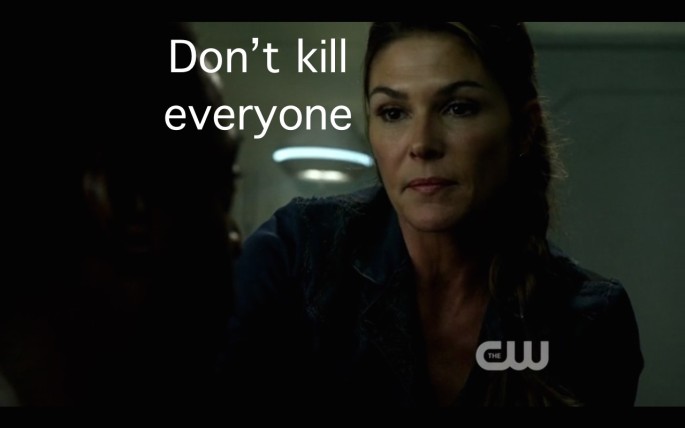 Clarke’s mom stormed out, and the chancellor (Siberious? Corroneous? WTF is this guy’s name?) had a pretty fair question for the evil politician.

The evil politician basically told Phinneas he was shit at his job, and the chancellor looked pretty butt-hurt about it.

Meanwhile, Clarke was trying to get the adventure squad back together! She didn’t want Wells to come along because I guess she’s still mad about him getting her father sucked out of an air lock. Fair enough!

Finn said he wasn’t going, which we all were like, “okay, sure Finn, you’re not going on an adventure with the Adventure Squad. Sure, pal, have fun doing nothing off camera.”

But look who WAS going: 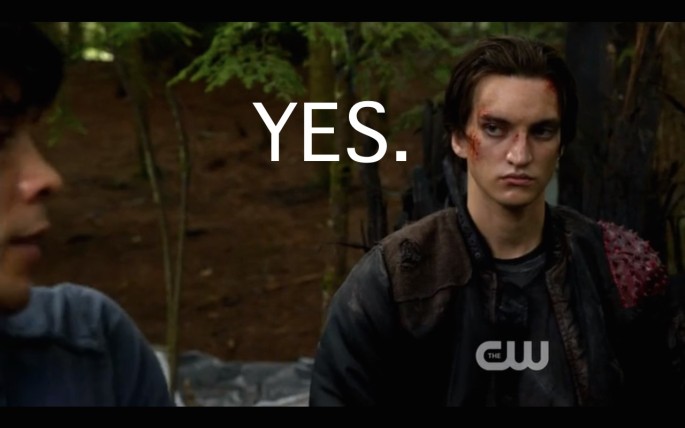 Seriously cannot get enough of that face. So much sass. So much ‘tude. Oh, Beautiful Creepster, never change.

The nefarious brother put some handsome dude in charge in his absence, to I guess stop Octavia from having any fun.

More importantly – New character Alert! This lady is a super hot mechanic who is clearly very bitchin. She doesn’t follow rules! She doesn’t wait for pressurization! She takes off her space helmet like a runway model and changes in front of dudes! 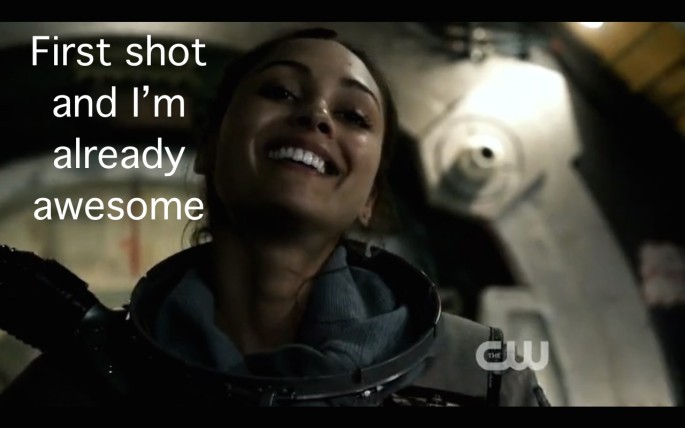 I wonder if she’ll end up being a romantic rival of some sort? Nah, that’s dumb.

Speaking of sizzling hot romance, we got a scene of Octavia telling her brother’s henchman (Adam?) that she can’t be controlled, and proving it by almost having unprotected sex with a convicted murderer. Naturally, our resident cock-blocker put a stop to that business.

But it turns out this section of the drop ship was already taken by someone who did NOT appreciate all the ruckus.

Raven, the new awesome chick, confronted Clarke’s mom about the prison conspiracy, threw her some serious sass and then sashayed off.

Clarke was getting all kinds of trouble from her new Adventure Squad, and Wells was little to no help. Then, in a shocking twist… 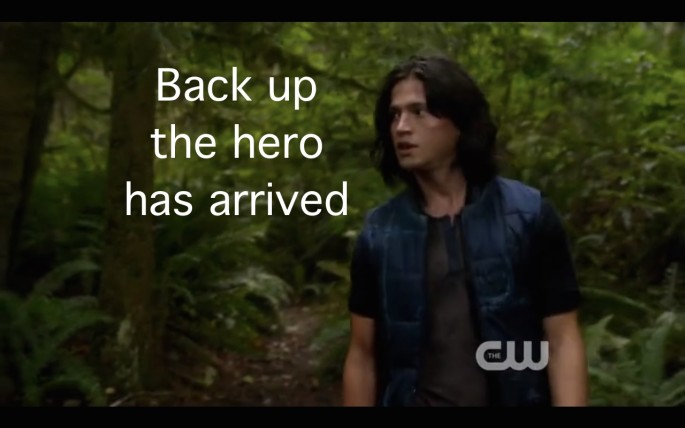 Then we found out Well’s super-secret heart’s desire.

He’s in love with Clarke! I’m sure she’ll forgive him for getting her father killed, and overlook the fact that he’s kind of a wiener, and they’ll live happily ever after before dying of radiation poisoning. Good luck, Wells!

Then we got a sciency scene that really boiled down to one thing:

Fair enough, dude! It was actually kind of sweet and made me like Octavia, which is good, because I hate being annoyed by characters, and it seems like she’s sticking around.

Then the door swung open and we got a speech by the Official Cock Blocker about how Octavia has someone who loves her, and he does not.

Finn had some theories about why Jasper was attacked, which involved territories, but more importantly, swimming. 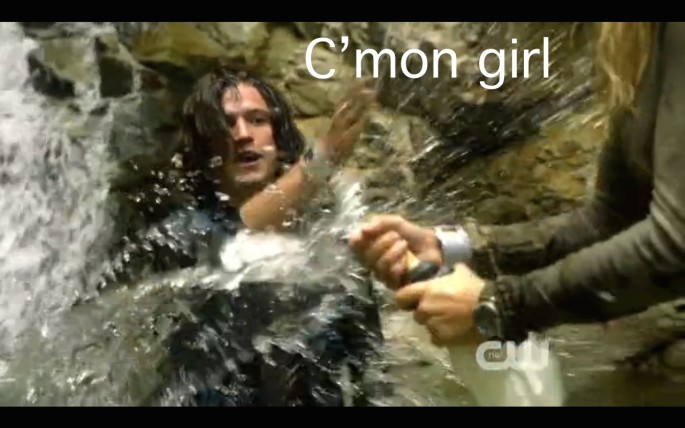 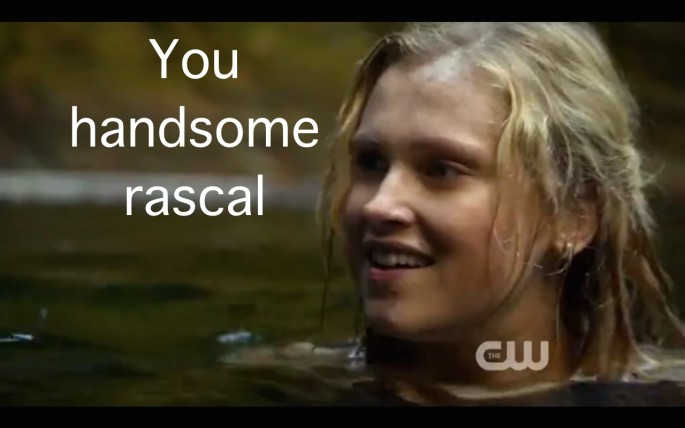 They found a trail of blood that was undoubtedly Jasper’s, but just to drive it home, they also found the goggles he wears for no reason. (Did the writers watch Can’t Hardly Wait just before putting together this kid’s character breakdown?)

Back at Space Camp, Raven dropped some truth on Clarke’s mom. They’re taking off the bracelets because teens will be teens!

Then Octavia met a pretty harbinger of death (it’s radiation that’s making these butterflies glow, right?), and followed it into the forest like she was a cartoon child in a cautionary allegory.

Also, wasn’t she dragged around a lake by a giant man-eating snake a couple of hours ago? Her wounds were ALSO healing remarkably fast.

The cockblocker noticed she was gone and frantically followed. Then this happened:

The adventure squad followed a trail, because I guess “Earth Skills” isn’t just the title of the episode, it was also a class up in space! Anyway, the trail led them to Jasper!

Up in space, the high council was voting whether or not to murder a ton of innocent people, and it all fell to Shuberious, who, after some monologuing, took a pretty strong stance.

And by strong stance, I mean no stance. Great work, bud.

Back at the sacrifice pit, the gang ran into a new danger, and I guess to prove his manhood, Wells stole the gun and started shooting it.

He was hilariously slow about it, but he got it in the end!

I loved it when the nefarious brother was like, “now she sees you”, right in front of her! Like, have some subtly, dude!

Clarke’s mom read Raven in on all the conspiracy she could handle, then asked her to fix up a very old shuttle so she could go to earth. Raven said yes, on one condition, she gets to go too! *gasp* All our dreams are coming true, you guys!

Then our hero made our heroine something that looks VERY SIMILAR to the necklace Raven is wearing!

J’accuse, Finn! I call shenanigans! He is going to flirt-town with our heroine when he already has a kick-ass lady who is willing to jettison herself to earth for him. SHAME, Hero. Shaaaaaaame.

Guys, so far we have been introduced to three strong female teens in this show, and so far ALL THREE are a love interest for Finn. Is there magic fairy dust in Finn’s luscious locks that make his “quasi-bad-boy” attitude irresistible to women? I get it, the boy is cute. But… ALL THREE?

Anyway, the nefarious brother was selling food for wristbands, you know, like an evil-doer does. Then Finn and Clarke sassed him about it, so he was in a rough mood. THEN he found his sister making out with his henchman!

Guys, here’s what I’m confused about: why designate an official cock blocker in the first place? I don’t get why he’s so peeved about Octavia getting some action. That’s a weird thing for a brother to be peeved about. I have an older brother, and this is not a thing he would ask/care about, or get upset over. Just let a girl get some play, man!

Anyway, he MAY have overreacted:

Then, as our heroes were happily munching on some CGI meat, we got a load of THIS GUY:

Bah! He’s just creepin’ on some teens like it’s a high-school production of Shakespeare in the Park.

Pretty jazzed to see how this strange fellow will factor into the storyline. I bet it’s going to be bat shit crazy and I am PUMPED. Are you guys pumped?

That’s all for now! See you nerds tomorrow for the next thrilling instalment of the Teen Adventure Squad!