“Hello ma’am, my name is Marsha and I’ll be your server today. Do you know what you’d like to order?”

GIVE ME MY STAKES.

YOU GUYS! The 100 continues to crush every preconceived notion I have about CW teen adventure shows. Just when I think I know what’s going to happen, this show is all: “Psych! Those savvy kids are NOT going to save 320 people like you thought they would! Haha, look at your face! I totally got you!”

And it did, you guys, this show got me. Was I alone in thinking those flares were going to be noticed just in the nick of time? I was SURE that adorable befreckled father with his sympathetic blind daughter was going to look back on this day and laaaaaaaugh. But NOPE. He’s dead, you guys, along with 319 of his buddies.

But what am I doing gushing about how awesome death on TV is, when we could photo recap!

The episode began with our heroes post-canoodle, surrounded by candles. Here’s my question: did Clarke get up and light those candles before Finn woke up, or were they burning all night? That seems wasteful. 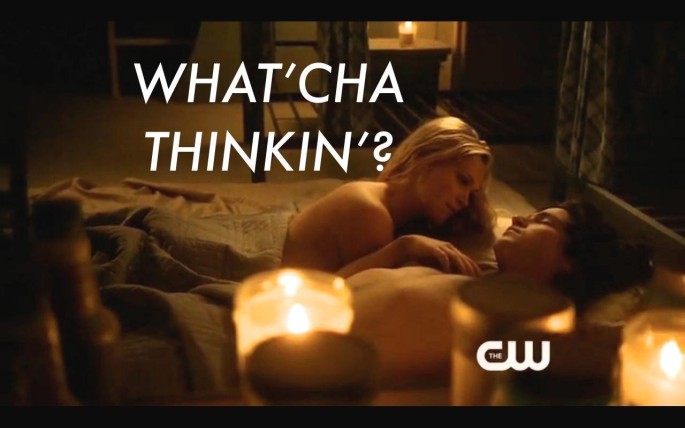 Seriously, what are these kids eating? They didn’t get any CGI, right?

Clarke was surprisingly open about how much she loved her trip to Sexyville with Finn. She wanted it to be him! She loooooooves him.

Meanwhile in space, Abby was rotting in a prison cell, even though criminals on the Arc get an automatic trip out the airlock. 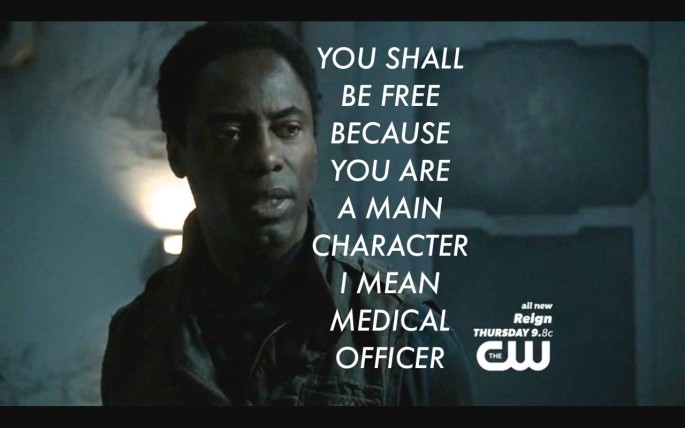 Philliberious told her that the council voted, and a bunch of people are going to die. At this point I was all, “sure, show… ooookay.” What a fool I am! He also threw it in her face that both their kids are (presumably) dead, which was kinda rude.

How long do you guys think Raven was in the pod before it jettisoned through Earth’s atmosphere? I can’t even make it through a Marvel movie without having to run to the ladies room (those movies are super long, ammiright). So either she has the bladder of a camel, or that space suit is chaffing.

Finn and Clarke were having a romantic moment when they saw a hot-girl-shaped shooting star. The folks back at camp saw it too, including this guy:

LOL for eternity. This made my year. I mean… I can’t… it’s just so ludicrous. Oh, TEENS!

After Bellamy recovered from his own studliness, he came outside to see what’s up.

Oh no! Bellamy believes his days are numbered, so he set off on his own sinister mission with an Adventure Squad of one.

Finn tried to get Clarke to take a moment to appreciate the fact that they’ve survived the hellish nightmare that is their current lives. She took the opportunity to remind the viewers that major characters have already died, and we’re only five episodes in. She DIDN’T mention the woodland couple that got eaten by fog, so maybe the camp thinks they’re on an extended honeymoon? Who knows.

I cannot say this enough, the fact that people actually die is my favourite thing about this show (besides the Beautiful Creepster – miss you!). It’s a “no one is safe” attitude akin to LOST or Game of Thrones.

Up in space, we were introduced to a very sympathetic family that we immediately started rooting for. 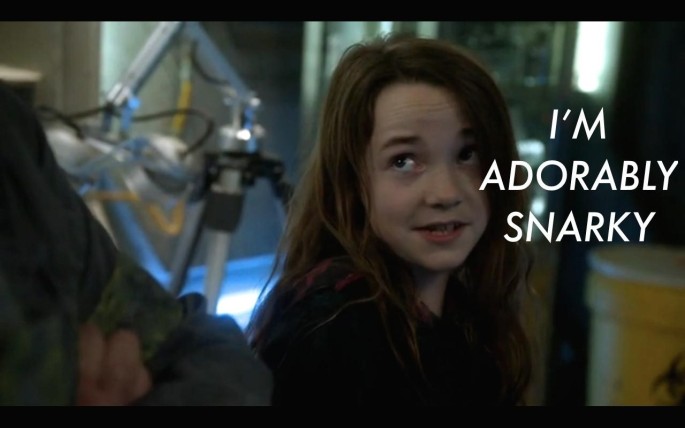 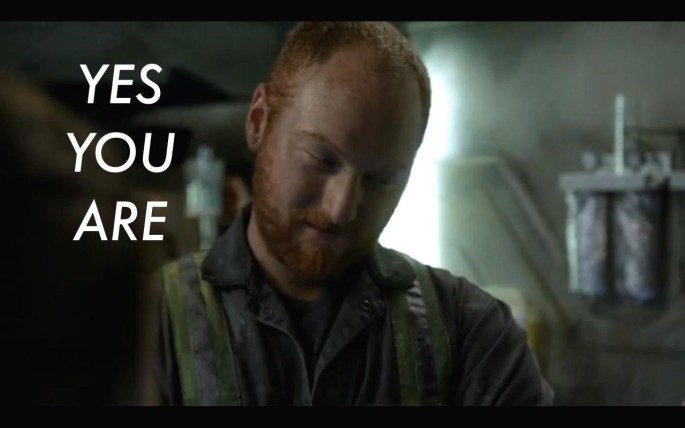 The lack of oxygen wasn’t just making everyone cranky and tired, it was actually turning little girls blind!

Clarke and Finn went looking for Bellamy, because I assume Clarke can’t stand to be away from him for too long, only to find out he had skedaddled. Of course, Clarke blamed herself for getting “distracted”.

Haha, like… what? I’m sorry guys, I know she’s our hero, but that is just some whackadoo logic right there. So, if she wasn’t off on some sex adventure, she would have noticed Bellamy leaving? Is it because she sits outside his tent at night whispering his name and peeling petals off flowers to leave by his bedside?

Speaking of his name, can we talk about how awesome it is that everyone has started calling him “Bell”

Anyway, then Bellamy told Octavia he essentially murdered a public official so he could babysit her, and she was NOT having it!

Kane was getting Tiberonious to give his authorization by tapping an iPad (LOL) when Ronorious dropped the bomb that he planned on dying with the others. 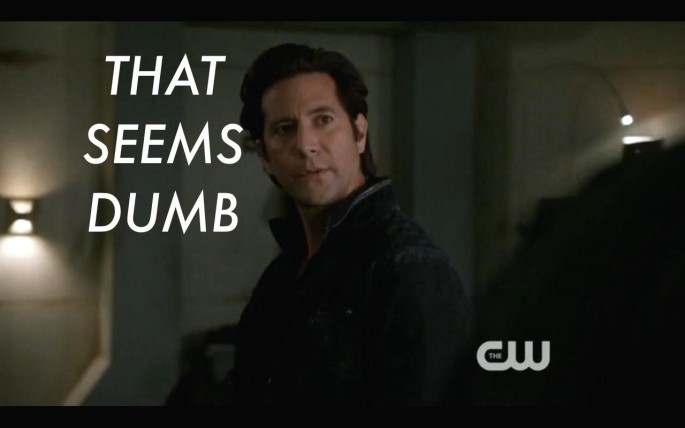 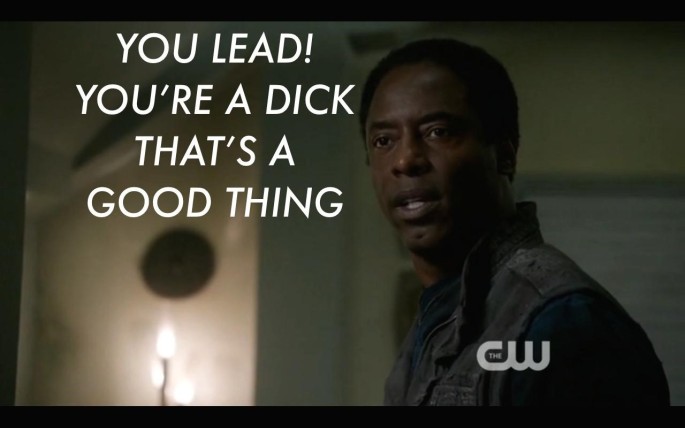 What ever happened to Abby’s best pal who was getting nasty with Kane? Did she get sucked out of the air lock? Did she not test well with audiences? Is she sitting in a corner of the Arc playing solitaire and eating peanut butter with her bare hands?

Back to the point – Kane was trying to convince Phineas to NOT kill himself, hinting that maybe Kane isn’t the sexy villain we thought him to be.

Bellamy got to the pod first and had a moment of deliberation before not killing Raven (yeah, you BETTER not!), then he threw the radio in the pond. 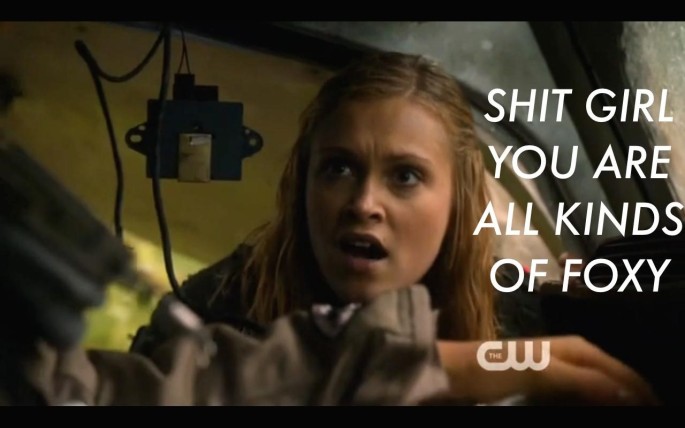 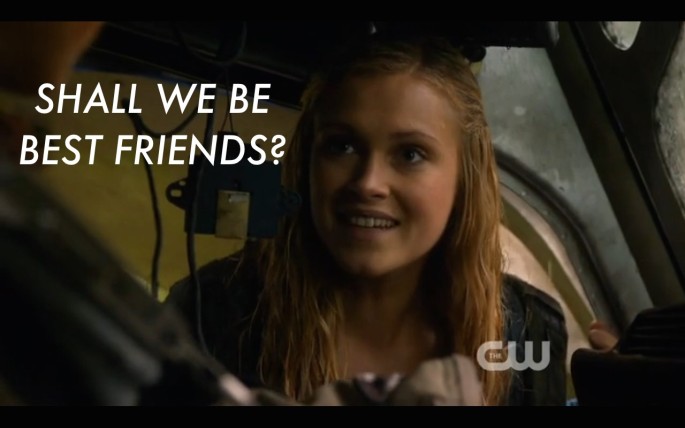 Then look who decided to show up! 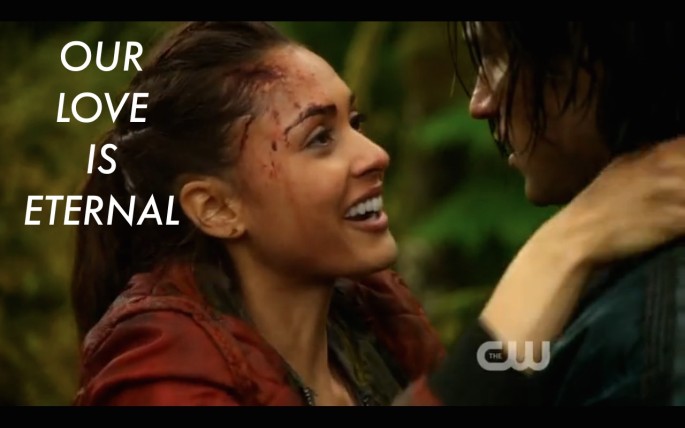 To her credit, Clarke was super chill about the whole thing, especially when they just would not stop making out in front of her. I get that they’ve been separated for a long time, but PDA is gross in any situation.

Up in space, Abby was understandably peeved at Hibranious for wanting to kill himself and leave Kane in charge. 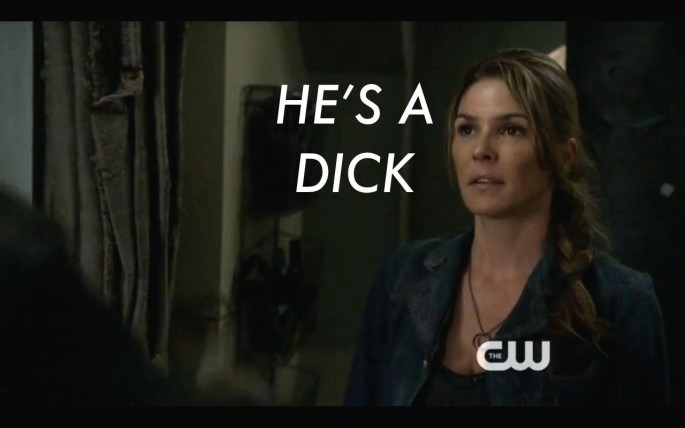 So Abby went back to her bachelorette pad and pulled out an old Vlog.

Then we got a thrilling scene where Octavia attacked herself! 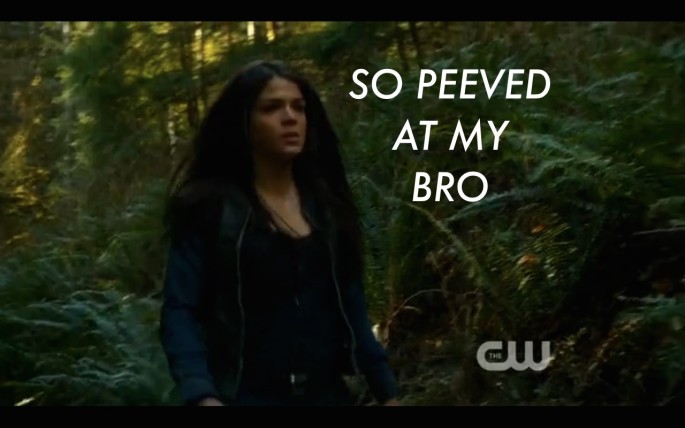 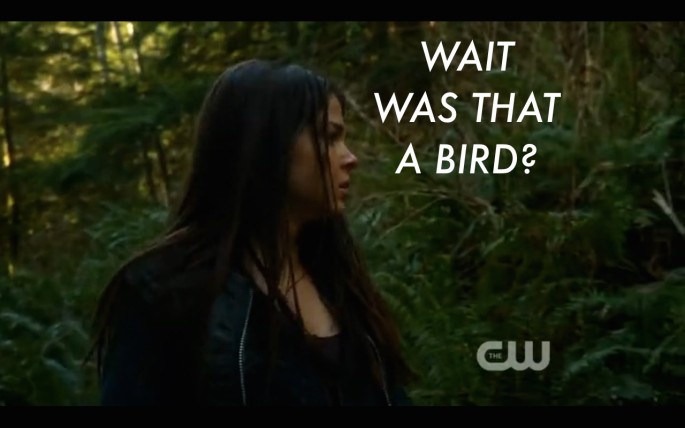 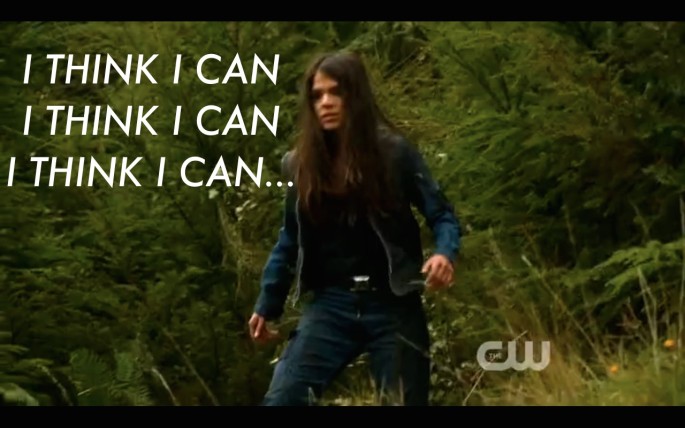 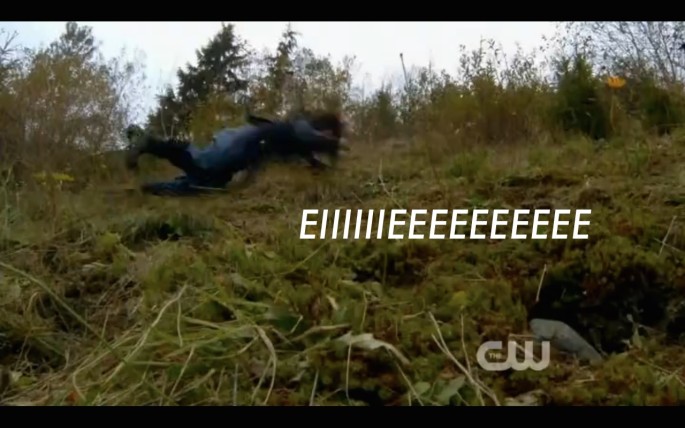 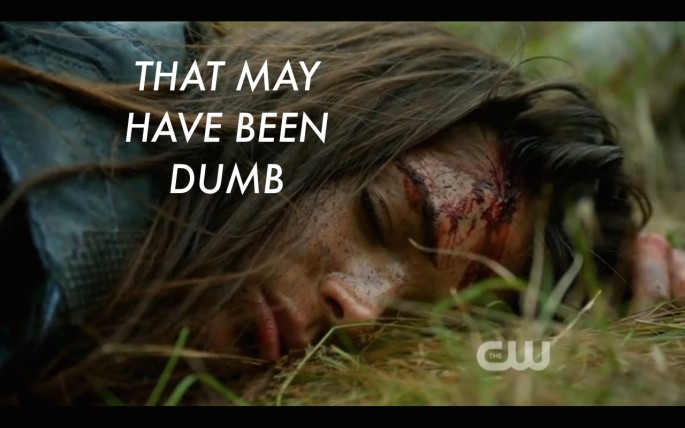 Octavia is a danger to herself. Moving on.

The Adventure Squad confronted Bellamy in the woods and told him that 320 will die because of his tomfoolery. Then I had a momentary flash of red hot rage because he MANHANDLED my angel-faced mechanic. She had it, though.

She informed him that he is not, in fact, a murderer. Clarke seemed pretty psyched to hear that.

Then everyone’s favourite Vlog started clogging up the airwaves. 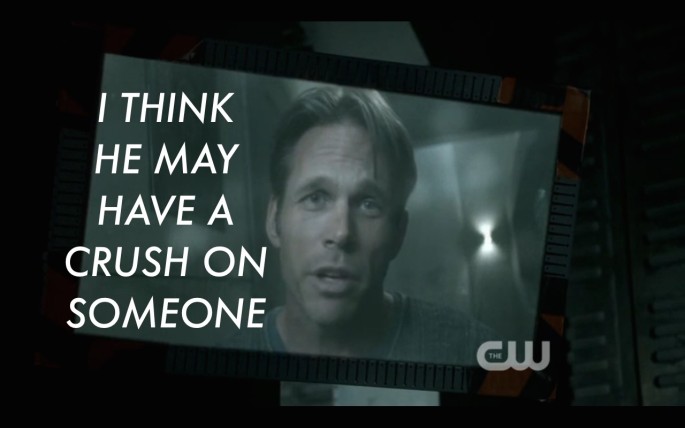 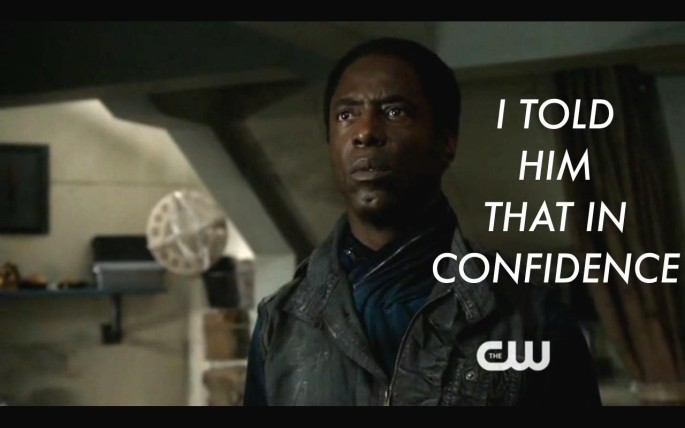 So basically Abby played Melted Zeus’s video blog for the whole Arc, letting them in on what’s up. Do you think she feels kinda dumb now for turning her husband in and getting him sucked out an airlock for wanting to do the same thing?

Down on Earth, the teens scoured the river until they found the radio, but alas, it was all for naught. Then the coolest chick on the planet (pun intended) came up with an idea!

Oh, and Finn tried to make drama about their love triangle, but Clarke once again was very cool about it.

Up in space, Kane and Gregarious were giving Abby heck when a scruffy, lovable ginger came in to volunteer to die. 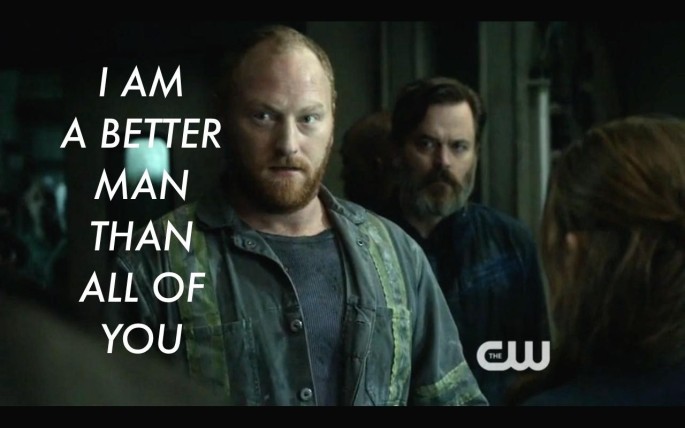 Then a whole slew of people came in to volunteer so that their loved ones could live and I legitimately got teary-eyed, you guys. I’m not ashamed! 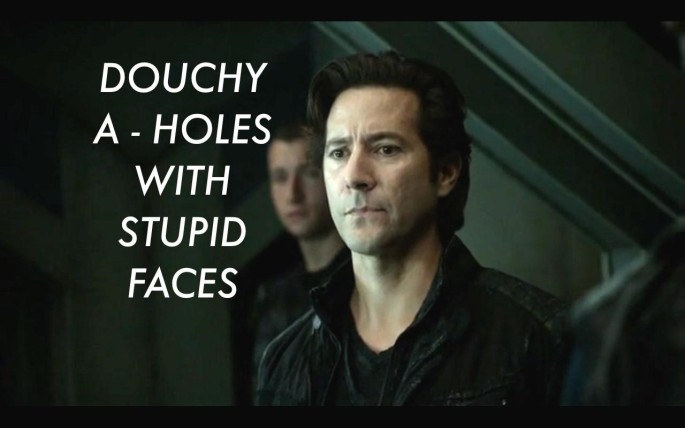 Kane seemed particularly bummed and sorry about the whole thing.

Back on earth Raven was being bossy and I LOVED IT. 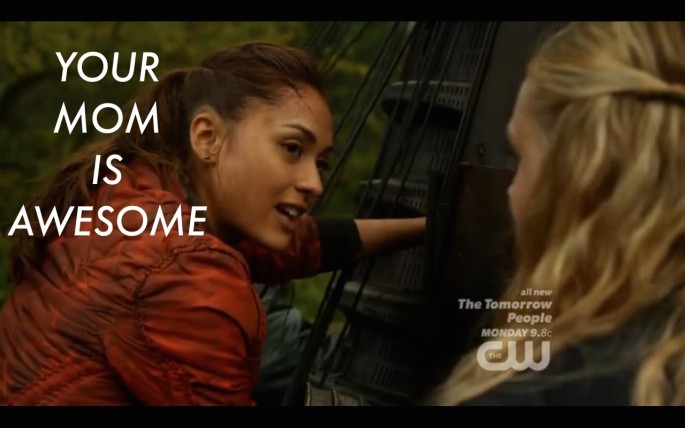 Then Kane convinced Brubonious not to kill himself.

Then we got a scene between the adorable befreckled father and his plucky blind daughter that I can’t even caption because I couldn’t come up with one snarky thing to say. She didn’t know it was the last time she’d see him, and he was trying to keep his cool, and IT WAS HEARTBREAKING.

This man should get awards.

Kane explained how he got Titanious to change his mind, and assured Abby that her radio is being monitored. Guys, I think I’ve figured out why the show ditched Kane’s old girlfriend. 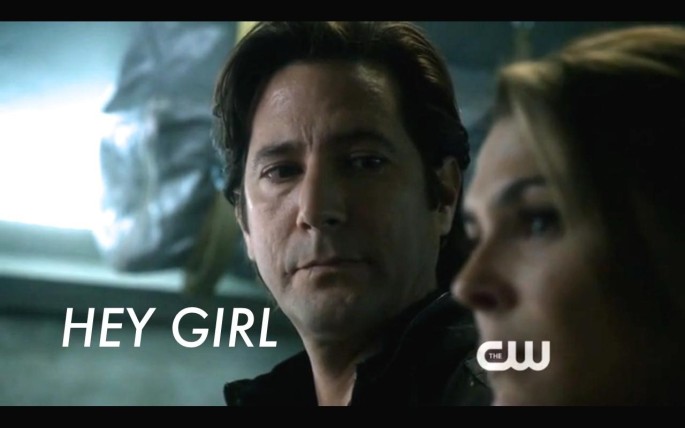 Down on Earth, the kids got the flares to work! 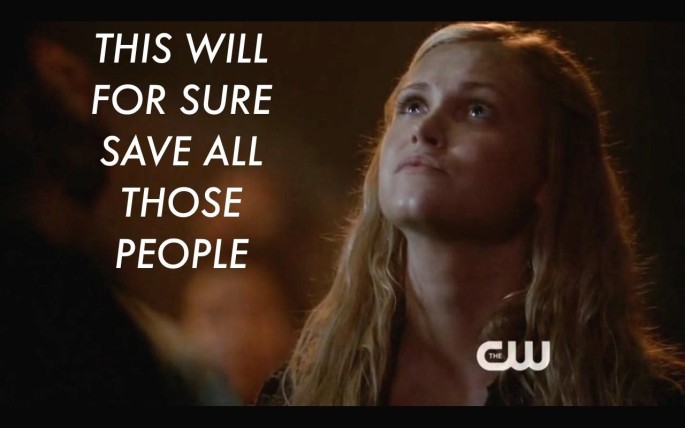 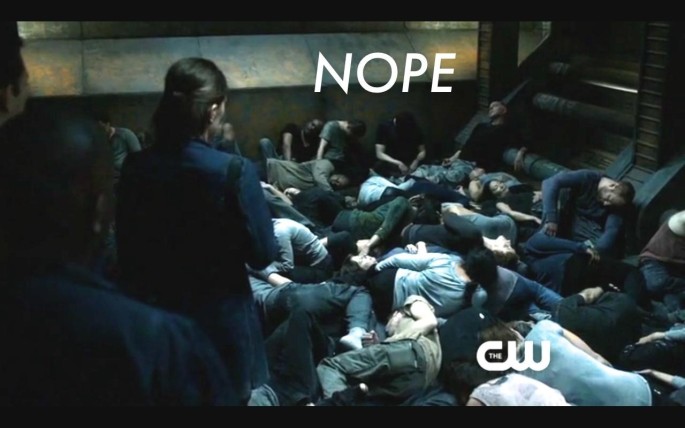 Back on Earth we got a scene where Bellamy and Clarke talked about wishing and she meaningfully glanced at Finn, which… *sigh*, okay. I guess that’s how this show is going to play it. When Clarke was being so chill about it I was hoping she was going to just let it go and move on. Call me crazy, but I don’t love it when a heroine is pining after a dude.

Don’t get me wrong, I love a good ship, and I recognize the entertainment value in romance. But, when that romance turns into a one-sided wallow-fest, my eyes just will not stop rolling. And I sincerely hope this doesn’t get in the way of an awesome team-up of those two strong ladies.

Anyway, Octavia finally awoke from her nap. She was out for a LONG TIME, you guys! I love how Bellamy’s main deal is to protect his sister, and he didn’t even noticed she was gone ALL DAY. 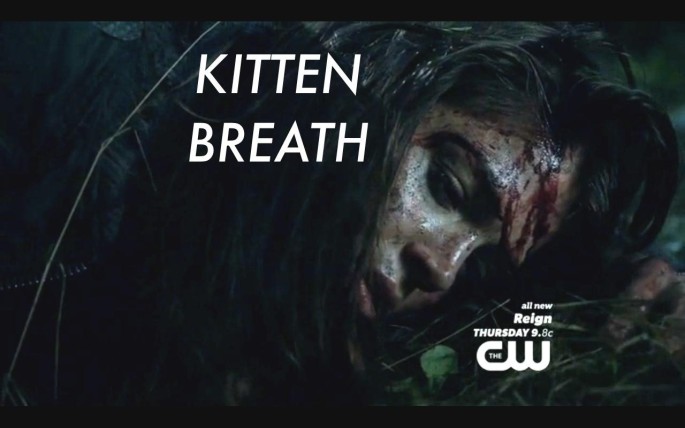 Then, just as we thought the rockets would go unnoticed… 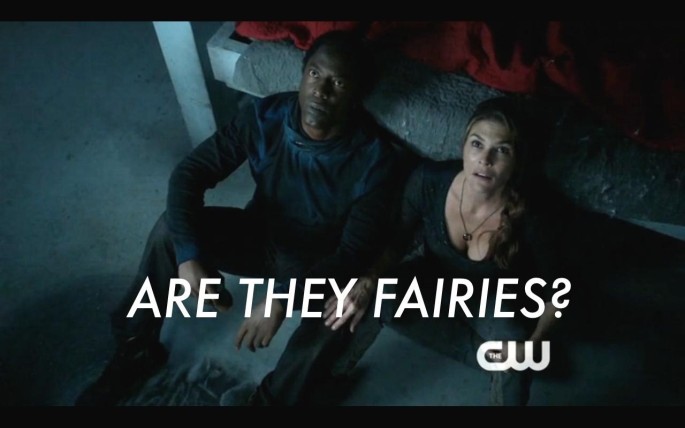 Well, five episodes in and the death count is… what, like… 330? I don’t know from math, but it’s a lot! I’m not saying there should be a major character death or mass murder in every episode, but so far this has been awesome. Like I have ranted about before, when people actually die, the stakes are raised. When the stakes are raised, we actually fear for the characters, and boy howdy, DO I EVER.

So, yes, I’m giving this episode a thumbs up. The only reason it’s not an ENTHUSIASTIC thumbs up is because it momentarily turned our heroine into a love sick school-girl, but I’m sure (hope) that’s short lived. She DID handle it like a champ, and I suppose I’m being hard on her, but I can’t help the way I feel! Just like I can’t help but finish this bag of dill pickle chips as my dinner.

— What do you guys think our Beautiful Creepster is up to? Did he start a band with the Grounders? Is their first single “Earth Stinks and So Do You”? I hope so.

— Are you pumped that Raven has joined the group? Do you think her and Clarke will be best friends, or will Clarke be a butt and treat her like a romantic rival?

— How long was that Grounder leaning over Octavia before she woke up? Do you think he smelled her hair?

— Can you make a better image of Bellamy as Belle? If so, PLEASE DO!

K, my bum has fallen asleep while writing this, so I better go wiggle a little.

See you next week!!