AND THE LAND REJOICED!!! Well, the land mostly cried like someone who wakes up with a furious hangover and starts to remember what they did the night before (not that I’ve ever consumed alcohol, but I’ve read about it in books).

Everything I wanted to happen this episode happened, AND SO MUCH MORE (namely a certain fierce sexy ex-commander). For real, dudes, I cried this episode harder than I did when Mufassa died in The Lion King (90s spoiler alert?). Was it the unexpected reunion of our lady loves? Was it the Jasper / Monty hug I’ve been yearning for all season? Was it seeing Clarke in her season 1 outfit, but more importantly, her season 1 hair? Was it ALL OF IT? I think it was all of it. It also may be the fact that we will not be seeing our beloved Adventure Squad for months. *loudly blows nose*

Of course, it wouldn’t be The 100 if it was a super mega happy ending. Yay! ALIE is gone! Everyone has free will again! Jasper smiled! Cool guys, have fun dying in a radiated apocalypse!!! Oh season 4, you are going to be a shit storm and I CANNOT WAIT.

But let’s not get ahead of ourselves. A LOT of stuff went down this episode, and it may or may not be time to photo recap it (it is).

The episode began hot off the heals of Perverse Instantiation: Part 1, with Abby taking a little post-hanging nap. 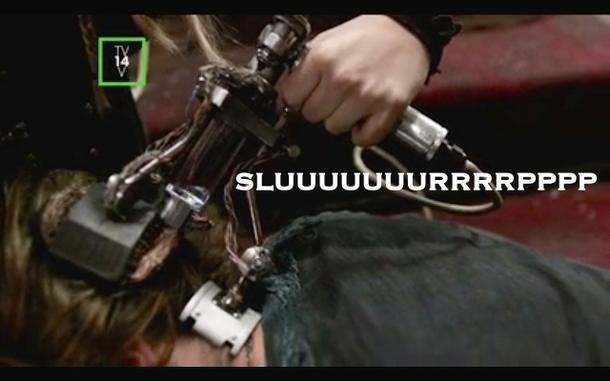 This already had me ugly-crying. ALREADY. Both of these women are very strong, ‘get ‘er done’ types, so when the show takes a moment to let us see their vulnerable sides, it gets to me. It’s gets to me HARD. Abby’s remorse was spot-on. High-five, Paige Turco!

Then Clarke announced her plan to transfuse her blood Mount Weather style with Ontari’s, and put the Matrix Bug into herself. 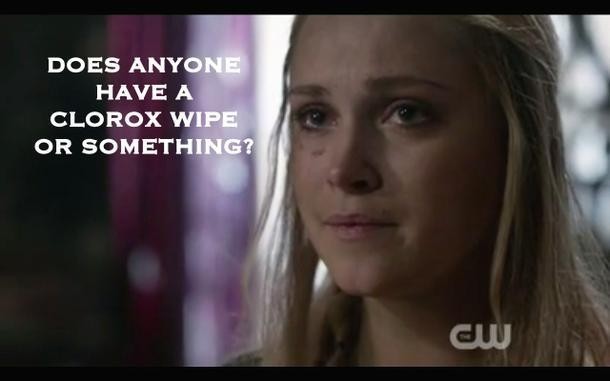 Seriously though, how much brain goop is crusted on that bug? That’s all I’m saying. Anyway, then ALIE’s minions started to climb the enormous tower.

Back at Arkadia, Jasper was doing his best ALIE impression, which (sorry Devon Bostick) was a good try, but not as killer as Raven’s.

In a fit of awesome, Monty snuck out and shot him in the leg, then Harper took care of business. Have I mentioned how emotionally attached I have become to Harper? BECAUSE I AM.

Back at Polis, Clarke was swapping out her blood for Ontari’s. 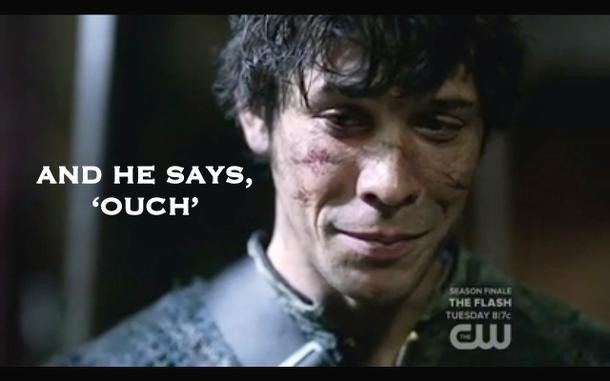 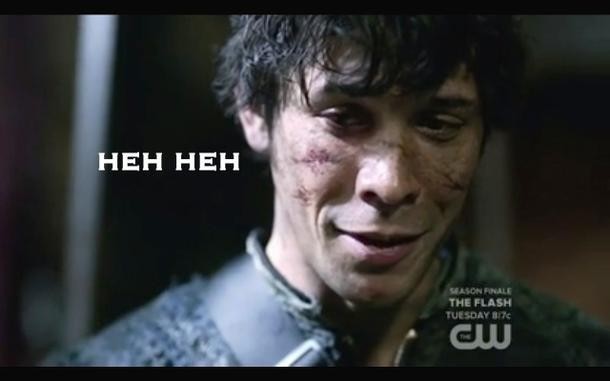 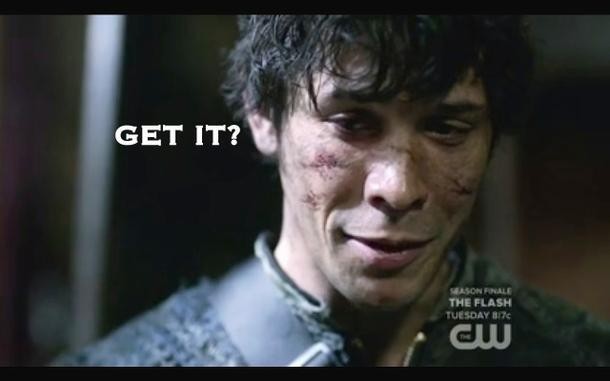 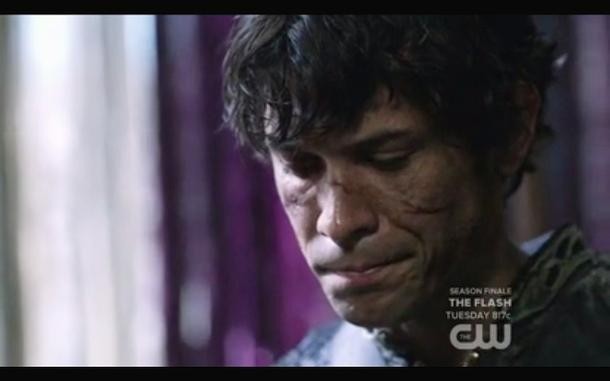 I loved when Bellamy tried to lighten the mood, and Clarke gave him a look that was like, “not now, hun,” and he was all, “fair enough.” Haha, THESE TWO! Aaaaand, in went the Matrix Bug!

So, we’re all just accepting that the Beautiful Creepster is a total expert at Matrixbugology because he saw Titus do it that one time? I mean, that’s fine, it’s just… *shrugs* well, fine.

Clarke was feeling tops, but a little peckish, so Bellamy gave her a snack. 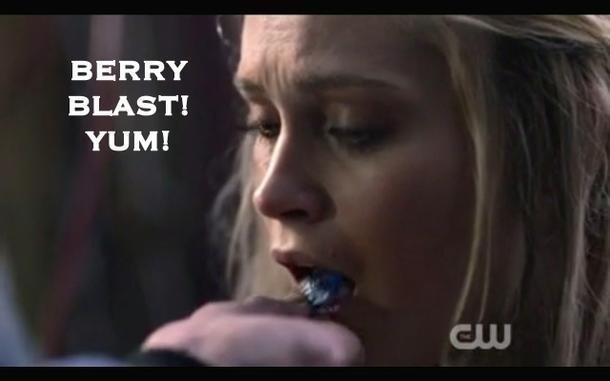 WHY does everyone think it’s a totally normal thing to do to place the chip in someone’s mouth like they’re a priest during communion? It’s a weird move, man! It was weird when Jaha did it, and it’s weird when our beloved Bellamy does it. I get that her arms are currently getting blood-swapped, but she can still move them, right?

Ugh, anyway, she popped into the City of Light and had her season 1 look back! What joyous happenstance!!

Clarke wandered around LightTown for a while, then came the most important moment to happen in the entire series to date: 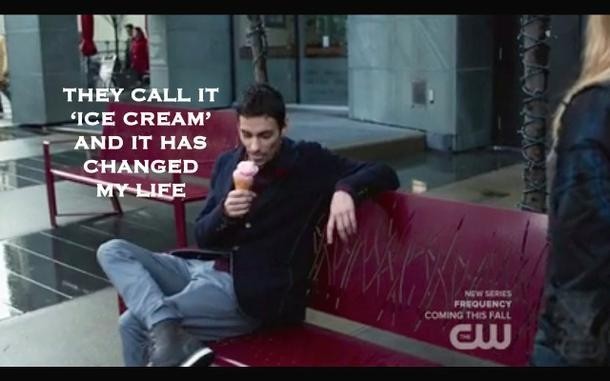 That’s right, folks, ICE CREAM has been introduced into the world of The 100. I FEEL SO SEEN. Do you think the space kids even know what ice cream is?? Did they have it on the Ark? Have the Grounders ever had it? Is it a mythical fairy tale told to children? Whatever the case, they know it exists now, and I’m sure season 4 will be largely dedicated to recreating it.

Back in Polis, Octavia was just chillin’ sharpening her enormous blade, as one does, waiting for the hoards of minions to crawl up the giant tower. Call it a Tuesday!

She cut his leg and then watched as the chipped pod people beat the shit out of him! Octavia, you are continually a delight. Never stop doing you. Bellamy busted in and saved him, and they barricaded the door. Then Bellamy broke up with Pike’s Stupid Face. 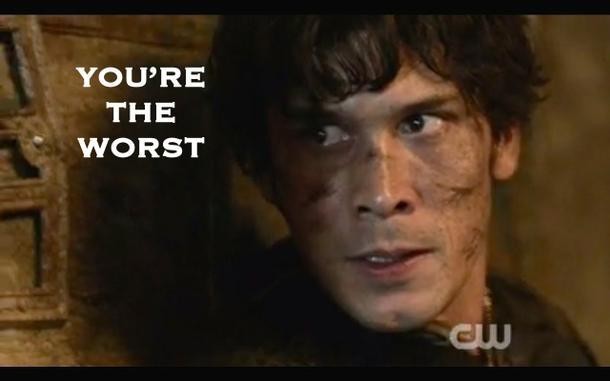 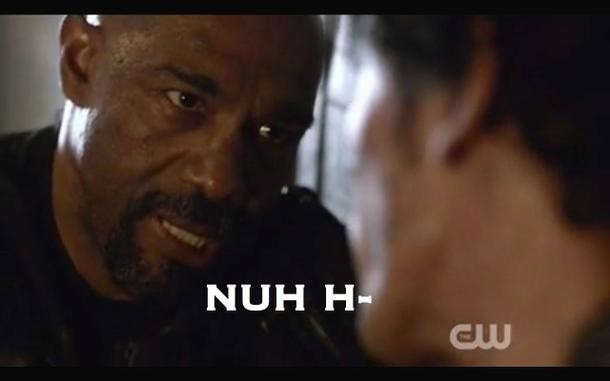 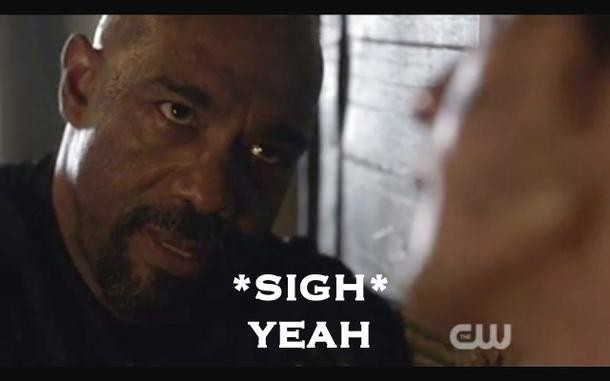 Ontari wasn’t giving Clarke enough nightblood (man, Ontari is such a dick, even when brain-dead), so Clarke’s romp through LightVille started to look like me any time I attempt physical activity. 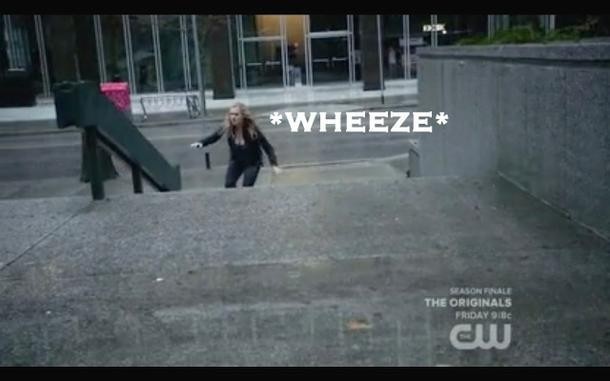 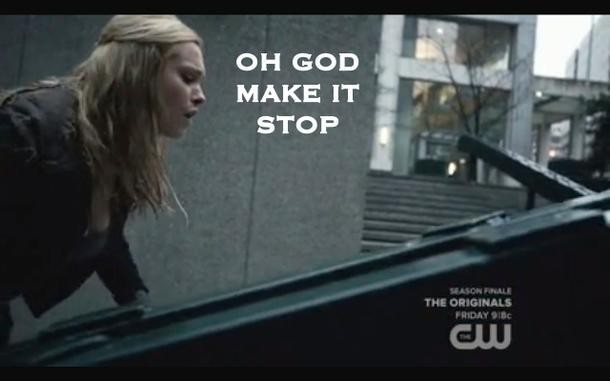 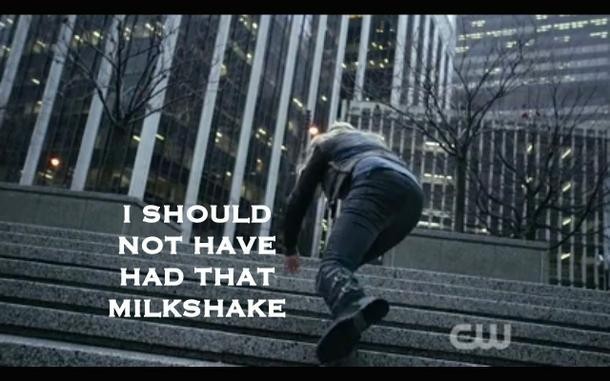 She started to get beat the hell up, but then… 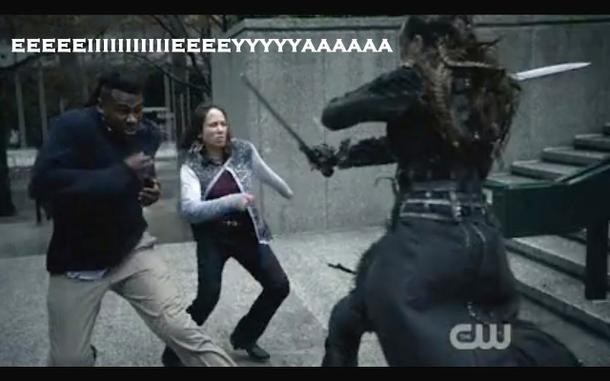 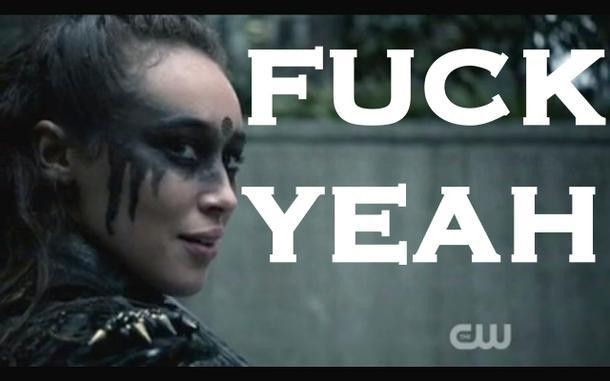 LEXAAAAAAAA!!!!!! It’s Lexa, you guys. My heart leapt. My fist pumped in the air. My body did this weird sort of joyous wiggle, and then I think I peed a little. This was the best thing. The very best thing.

What a dynamic duo! I never thought I’d love the pairing of our Beautiful Creepster and Abby SO MUCH, but I do. What a couple of total badasses. You guys, I truly cannot pinpoint one episode MVP. Everyone was just so damn kick ass.

The brainwashed masses were breaking through the impenetrable wall of footstools (LOL), so Pike’s Stupid Face came up with a plan. 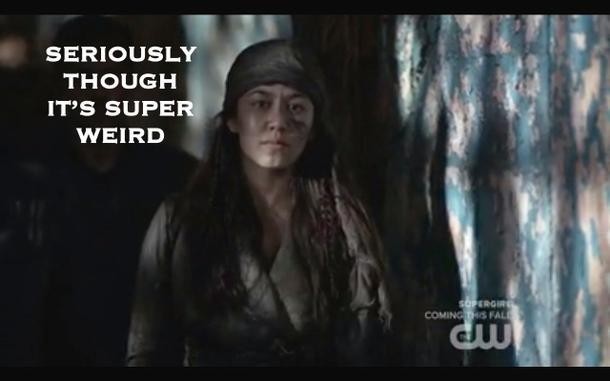 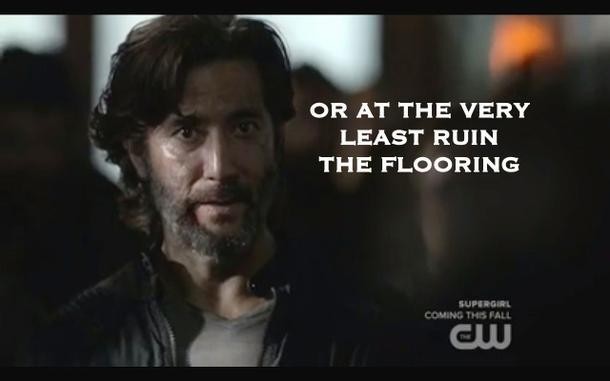 They threw their zappers into the water and electrocuted their pals. Pretty smart! Good job, Pike’s Stupid Awful Stupid Face.

Now that Clarke was feeling tip-top, Becca helped to lead her and Lexa to the kill switch. 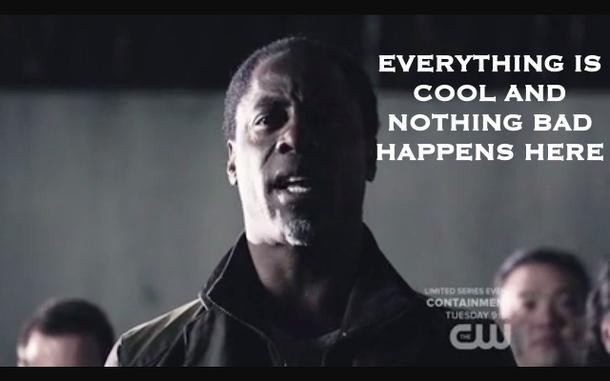 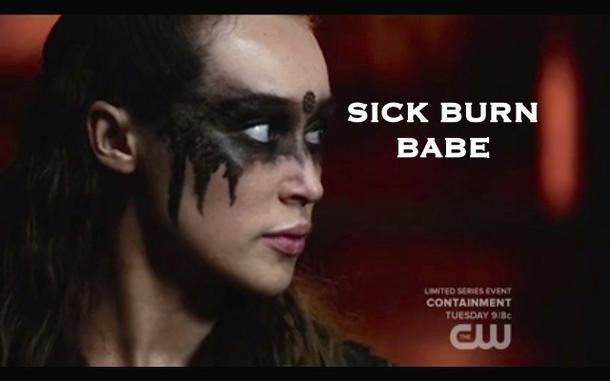 Lotttttts of people were in the way, but then Raven showed Clarke a door, and Lexa fought off the minions long enough for Clarke to get through. 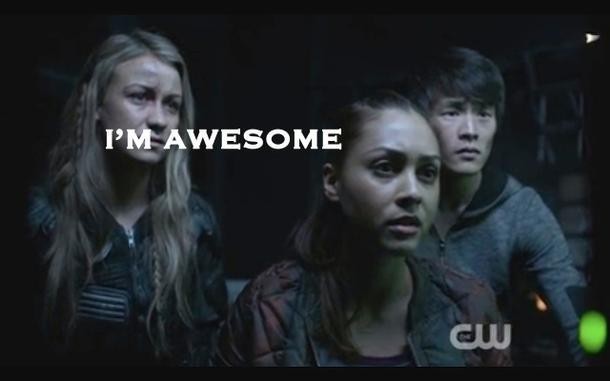 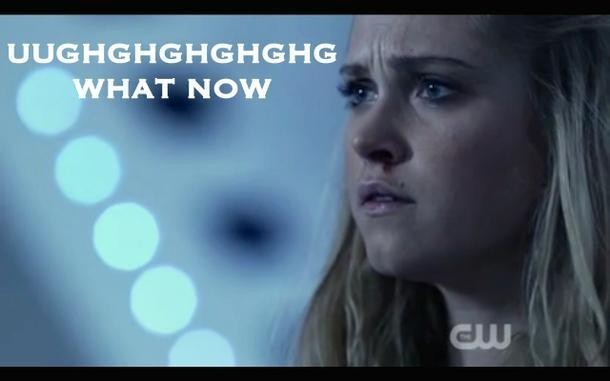 ALIE revealed that a bunch of bull is going down on the earth’s surface, and the human race has roughly six months to get their shit together.

HAHAHAHAHAHA OF COURSE! Man, I love this show. Yet again, Clarke is standing with her hand on a lever, being forced to make an impossible decision, while her loved ones fight for their lives. 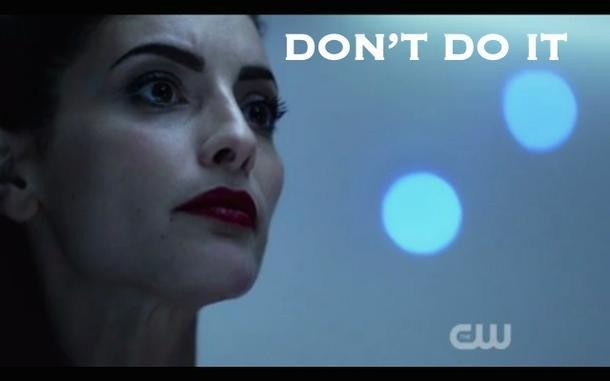 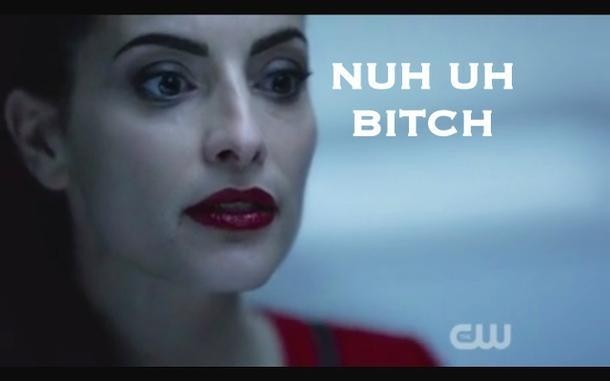 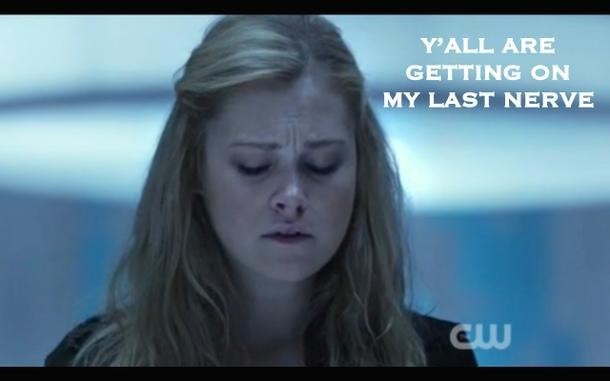 Lots of things were happening! Kane was strangling Bellamy, Abby was shooting people, the Beautiful Creepster was pumping Ontari’s heart with his bare hands amidst all the fighting (what an adorable little hero!), and Pike’s Stupid Face saved Octavia. All while Clarke was having a moral quandary, and at the same time working out her own feelings of loss and guilt. Haha, THIS SHOW!

She pulled the lever! And everyone woke up suuuuuper hungover, with definite the-night-before shame.

They took the Matrix Bug out of Clarke, and then everyone commenced hugging. So many hugs, so many tears, so much fist pumping from THIS GIRL (You know I live for hugs). Kane and Abby! Murphy and Emori! Miller and Bryan (who did NOT die, yay!) A solemn nod between Octavia and Bellamy! But, most importantly… 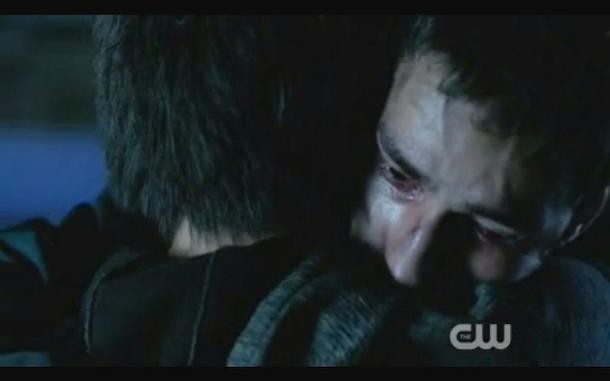 LOVE IT! Speaking of things I loved… 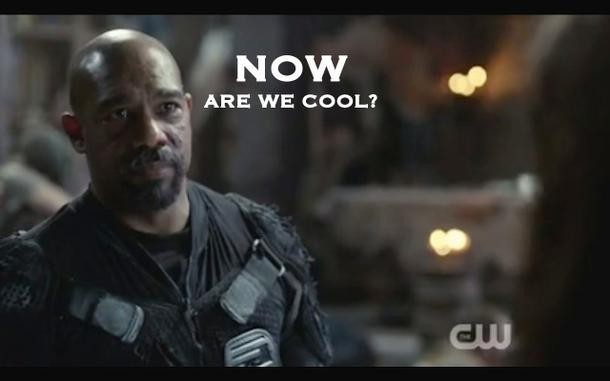 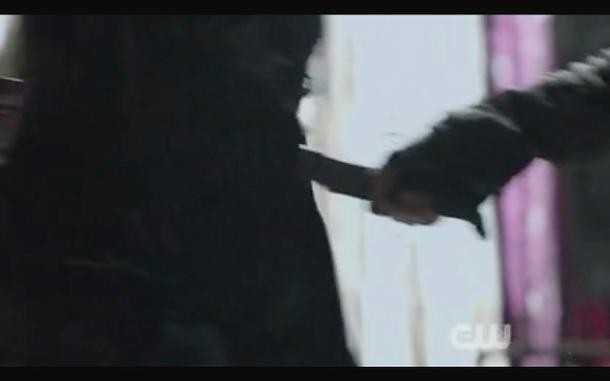 Of course the season ends with Octavia impaling Pike’s Stupid Face through the stomach and walking out like a baller. OF COURSE IT DID! #OctaviaForTheWin

Well, here we are, guys. We made it to the end of Season 3. Are you in shambles? I’m not ashamed to admit that I am (or to admit how many Rolos I ate during this episode. Hint: A LOT).

“In the City of Light, you don’t have to bear the burden of decisions like this.” Once again,The 100 plants us in the midst of a muddy moral arena and forces us to think about what lines we would be willing to cross if placed in the shoes of these foxy teens. What WOULD you do? It’s easy for us to yell “pull the lever!” from the comfort of our living rooms (or in my case, the treehouse where I live), but that’s from the standpoint of a viewer. What if YOU were given the choice to “save” the minds of everyone you know, thereby erasing their free will, versus condemning them to a very possible gruesome death in the near future? The shiny, painless City of Twinkly Lights seems pretty darn tempting, doesn’t it?

But that’s not what our heroes are about. They don’t take the easy route, like… ever. So they’re alive and free to fight another day. And fight they shall! Man, what a set-up for season 4!! First it was the Grounders, then the Mountain Men, then ALIE, and now THE EARTH. They’re battling the earth next season, you guys. THE EARTH. Hahahahahahahhahahaha! My God. I seriously cannot wait.

That’s it from me! Thanks for spending this season with me, and I’ll see all you cool cats for season 4! For now I have a date with some mint chip…