You know when you’re at an amusement park, and you wait in line for 17 hours for a ride, then you finally get ON the ride and you can’t really believe that you made it, and it’s everything you imagined it would be and more, but it’s over in about 43 seconds, and the instant you get off you immediately want to get back on, but you have to go wait in that line again?

Yeah. You feel me.

We have waited so patiently. We are CHAMPIONS of patience. Sitting by the window, watching the rain fall, doing needlepoint or some shit, yearning for the return of our beloved Adventure Squad. And now here they are before us, looking older, wiser, less bloody and gross… wonder how long that will last. *happy sigh*. HI YOU GUYS!!! Sweet baby Beelzebub, it feels good to step back into this nightmare factory of a world, doesn’t it? How are you guys doing? Is your voice raw from squealing? Are you filled with questions, and also cherry Starburst? Is there any point in the other flavours of Starburst? Honestly.

A LOT went down in the season 5 opener. We saw how Clarke met Madi, we saw the Spaceventure Squad doing their thing, we met the season 5 antagonists maybe (who knows, though), we met Clarke’s new best friend – a bird, and we saw Octavia being… I don’t know, an Emperor of some sort? I dig it.

But I know what you came here for, and it’s not my recipe for wieners and beans, so let’s photo recap!

The season began with Clarke digging her way out of some rubble and taking in the sweet, sweet, desolate sights.

Sure, she’s the last person in a lifeless wasteland, but that’s no reason to be a downer. Girl was on a mission! She had a map and everything! And she dug up a Rover! And her skin was probably SO smooth from all that sand! Living in a world with natural exfoliant pelting you wherever you go? Sounds like a dream. 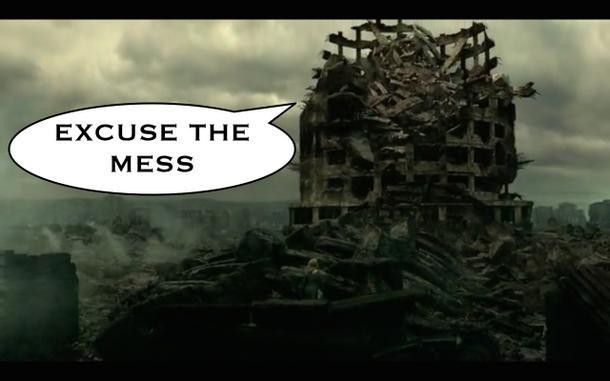 T’wasn’t no thang to Clarke! She rolled up her proverbial sleeves and got straight to work. 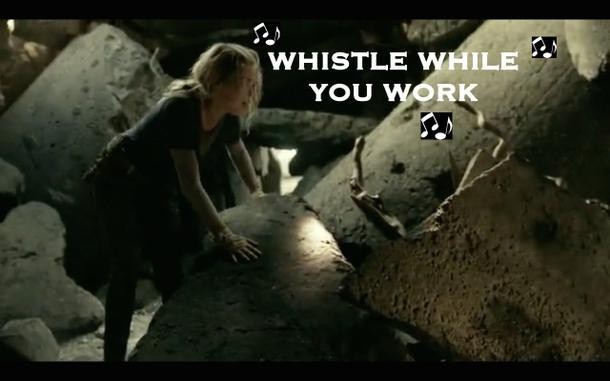 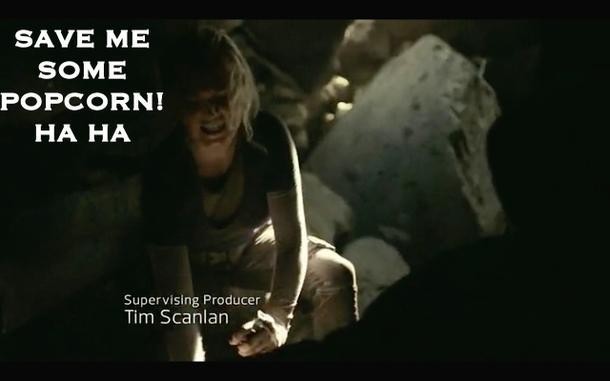 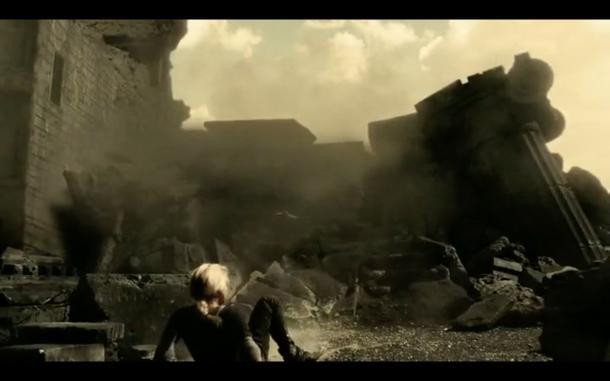 After what looked like a LOT of fun, Clarke slowly realized that her invite to the bunker had been revoked. For real, her screaming “Mom!” into the miles of rock and debris was a bit too much for me at 6 minutes into the season, you know? Like, leave my emotions alone until at least a few episodes in. Give me time to remember what it is to feel again.

Then Clarke popped on over to Ark Camp, because apparently this show hates our feelings and wants to destroy them. 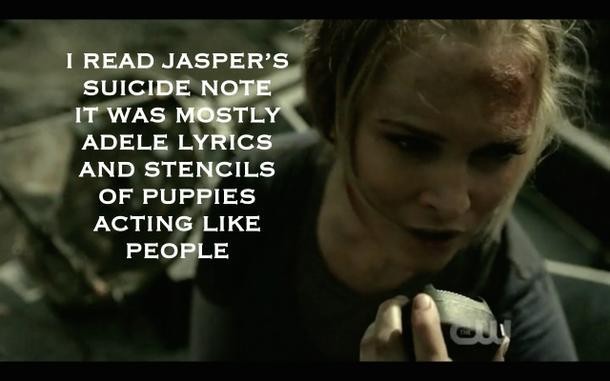 Not only did Clarke find Jasper’s fancy calligraphied suicide letter, but also his season 1 goggles, which she then WORE. I wanted to know what was in that letter SO BAD. I wanted it more than I want to eat a pogo stick while bouncing on a pogo stick (I can’t be the only one). Privacy laws only exist when you’re not the last person on the planet, Clarke! Ugh. Anyway, she radioed the Spaceventure Squad to let them know that she’s not peeved about them shooting into space on a rocket ship without her, because they did the right thing, and she’s totally cool on her own in a post-apocalyptic hellscape, totally cool, cool like the wind, never been more cool.

Then she started munching on giant bugs like she was Timon and Pumbaa. 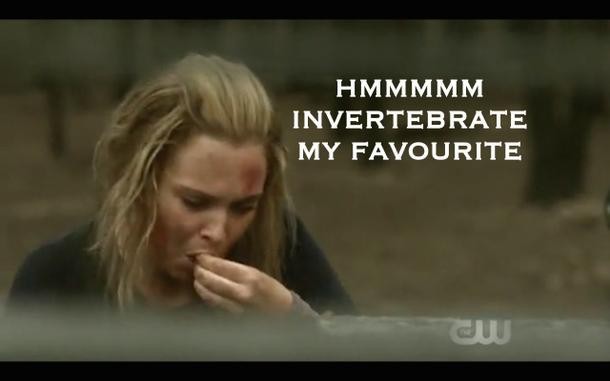 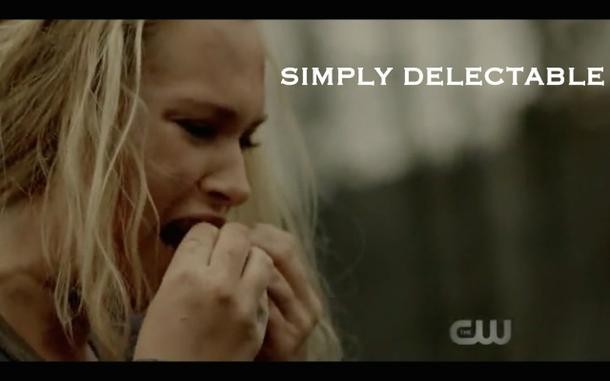 GIRL ATE BUGS OFF THE GRILL OF HER CAR. This was a fun montage, eh guys? Drinking some sweet, sweet, radiated rainwater, feasting on delicious car-bugs, getting lots of sun, and exfoliating in a soothing sand storm. If you don’t admit you were jealous then you’re lying.

Then a jerk storm whooshed in and was all, “hahahahha Imma wreck your car!” and it did. It did wreck her car. But our girl just shrugged and was all, “whatever, I’m in a FitBit competition anyway, I need the steps, so THANK YOU, Jerk Storm!”

Then after what looked like a very restful break, Clarke was awoken by her new best friend. 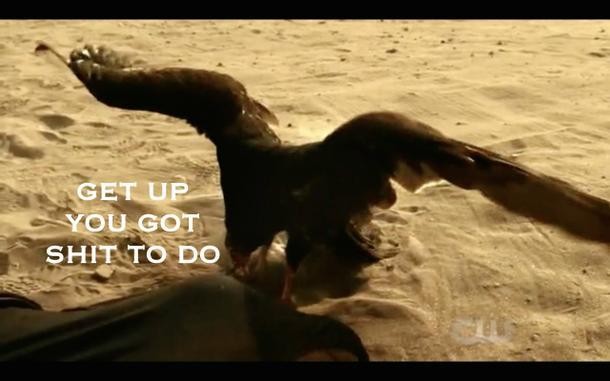 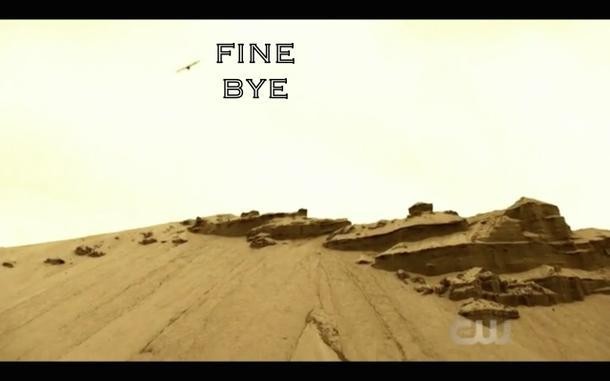 But Clarke didn’t want her new best friend to go away, she just wanted like, 5 more minutes. She chased it over a huge sand hill to find… more sand, which I guess when you’re a human being who needs water and food to live, can be rather distressing.

She ain’t wrong!! Man, this was a good moment, not only because it showed off yet again what a good casting choice Eliza Taylor was, but it also reminded us that at this point Clarke should be a broken mess of a human, rocking back and forth, drooling on her own clothes and singing “This is the Song that Never Ends”. Girl has been through SO MUCH. She (and the show) needed that 6 year time jump in order to keep our protagonist sane. She deserved to live in a magical FernGully with a surrogate daughter, catching fish and dyeing their hair with berries.

But I’m getting ahead of myself. 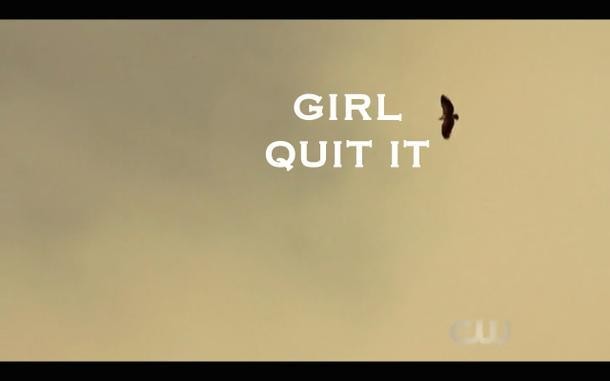 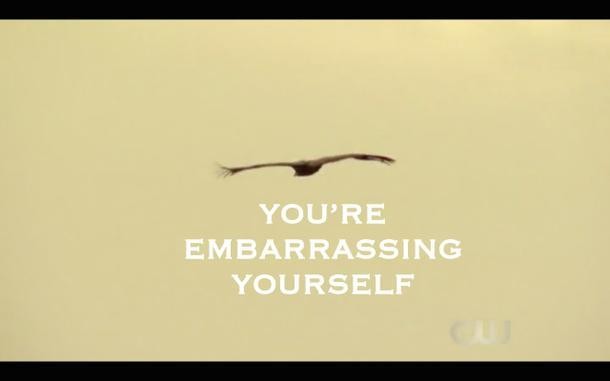 She followed the bird to FernGully, kindly thanked it for saving her life, then she shot and ate it. Hahaha, classic Clarke! Then she found a pretty swanky dwelling that looked like it used to be some kind of artist commune. Sure, she had to clean up a bit, there were a few (hundred) dead bodies here and there, but DAMN. This was a 5-Star patch of irradiated land! Go get it, girl. You deserve it!

She set herself up quite nicely, making herself the mayor AND the local radio personality. Hey man, if you have the chops, why not? 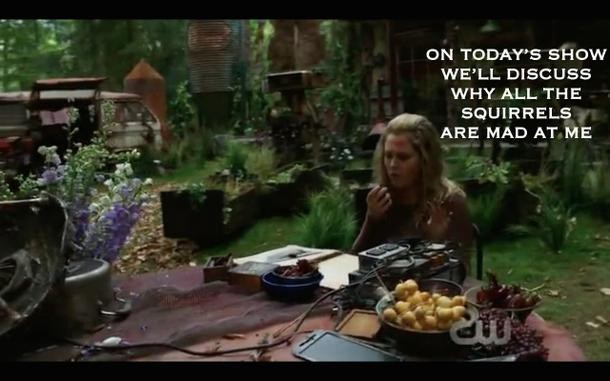 Then she saw another living human in the distance, and understandably chased after her. But, because this is The 100, and people generally bond by trying to kill each other, the little girl immediately jumped on Clarke and tried to cut her up.

It was Madi! Cuuuuuuuute. She only stopped trying to kill Clarke because she saw that she, too, was a Natblider. What fun! Then, like a total badass, Clarke stitched herself up without so much as a “yowza, that smarts”, and passed out.

When she awoke, she discovered that an adorably mussed little gremlin had stolen all her things. Hahaha, what a wily rascal Madi was! Anyway, Clarke found her fishing, and lured her into affection through her own vanity by drawing a bad ass picture of her. 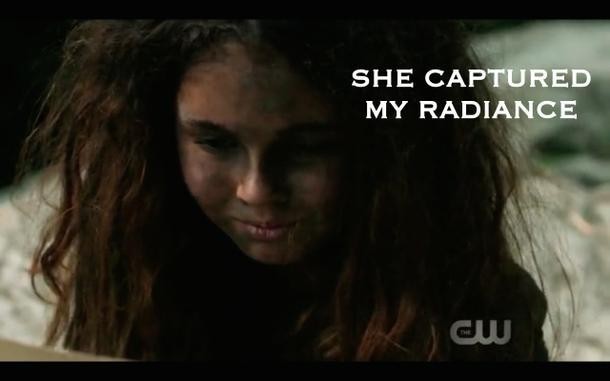 And then it time-jumped to present day-ish to show us that Clarke and Madi are living a peaceful, happy, delightful life! Enjoy it while it lasts, ladies!!!

MEANWHILE IN SPACE **giggly little happy dance** (it has been SO LONG since I’ve used that segway!) the Spaceventure Squad was just chillin like anti-villains, living the space-dream. 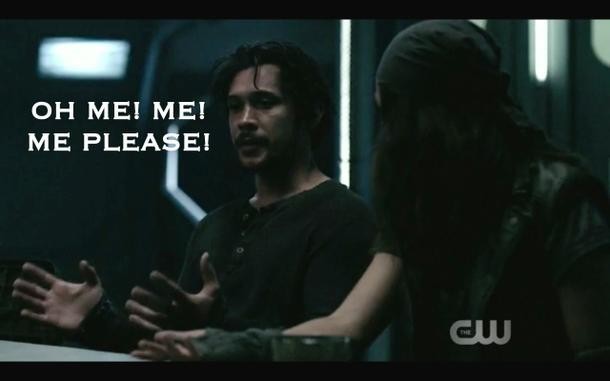 ARE YOUR HEARTS OKAY???? Man oh man it was good to see the Squad! And they filled us in on so much info in one short conversation! Echo taught Raven to fight! Monty and Harper are still the cutest! Emori loves to spacewalk! They are FOR REAL living off algae! The radiation blocks all signals, so they’re missing out on WanHeda’s Wonderment & Radio Extravaganza! They don’t have enough fuel to get home! Everyone is still wildly attractive! Yayyyyyyyy!

Then we learned that Murphy is in self-imposed exile, for reasons I assume are related to creeping beautifully.

THIS WAS ABSOLUTE MAGIC. We have yet to discover the exact reason the Beautiful Creepster has kept to his side of the ship, but Bellamy’s theory is that he’s simply too precious a hero to be sitting around not-heroing all the time. Then Bellamy Good Will Hunting-ed the Beautiful Creepster by trying to make him say he wasn’t worthless. How are your hearts, you guys? Because mine is currently covering the walls of my apartment, post-explosion.

Anyway, they spied a curiosity in the form of another spaceship, and skedaddled to tell the others. 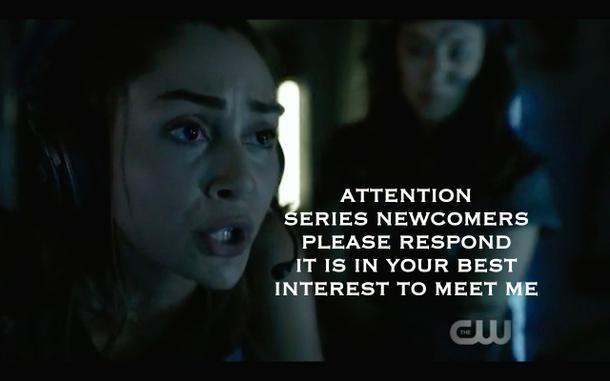 Aw dang! They saw the transport ship on its merry way to Earth, but it wouldn’t respond. Wonder who they could be!

Clarke gave Madi a gun, and she was all, “what’s this?” and Clarke was like, “a moral quandary”, and Madi was like, “your favourite!” Then Clarke scampered off to check out the new characters while Madi hid in a hole staring at her own portrait.

Yes! I am already so into this lady! I am very excited to learn about her many, many, sexy, grey layers.

We saw Clarke in her counting house counting out her guns and ammo, when she heard a gunshot go off.

Clarke pounced on the fellows before they could shoot Madi, and a kerfuffle ensued. If you look closely, the look on Clarke’s face said, “this feels right.” 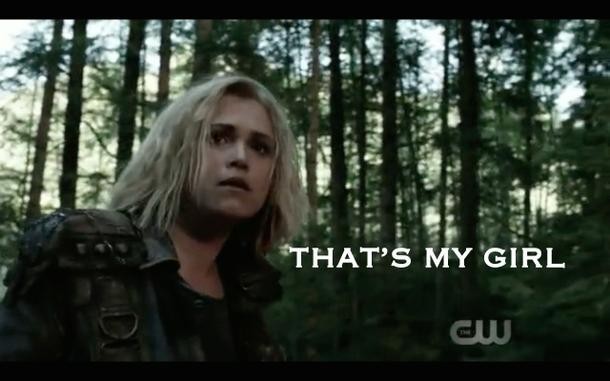 Madi shot and killed someone! She IS Clarke’s daughter! Oh man, do you think Madi loves moral quandaries as much as Clarke? VERY excited to see how Madi evolves as a human being. Anyway, then Clarke shot and killed the other guy, even though he was maybe the nice one. Starting off on a reeeeeeeal dark note, and YOU KNOW I LOVE IT.

And now the Prisoner Peeps (I’m sorry, I couldn’t help myself) know they’re not alone!!

Up in space, Monty was struggling with going back down to Earth, because Earth is the absolute worst, and everything bad that ever happened to him, happened on Earth. Fair enough, bud! You are very handsome! (OMG don’t tell him I said that)

If anything happens to either of these two, there will not be enough snark in the world, do you hear me?

YES A THOUSAND TIMES. This friendship is a bright, shining star in the darkness that lit up season 4 with its quips and compassion, and I am positively thrilled to see it develop. MORE PLEASE. 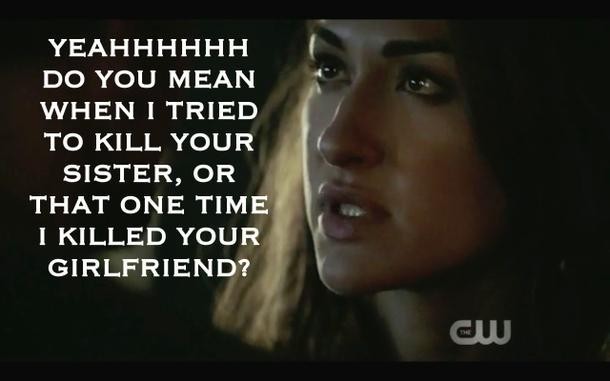 Put up your hands if you felt the glorious rumbling thunderous outrage of a legion of shippers. Bellamy and Echo!!! I dig it, obviously, for so many reasons. You put two sexy kick-ass people on a spaceship together for 6 years, OF COURSE this will happen. AHHH, the delicious baggage these two have. Remember Bellamy’s Dead Girlfriend?? Hmmm… delightful.

Then we got a glimpse of what Octavia is up to, and it is BONKERS.

Well guys. That’s that. The premier episode of season 5 somehow managed to slowly reintroduce us into the world of The 100, make us feel things, catch us up with the Squad, introduce new characters, AND provide some horrible violence.

The good news is that we only have to wait a week before we get to check in with them again, and next time I presume we’ll jump on in that bunker. Is murder still Octavia’s #1 favourite thing? Was Kane and Abby’s sexual tension too electric for an enclosed space? Did Miller and Jackson start an improv troupe? I AM JUST SO EXCITED.

If I may be so bold as to get real for a quick 7 seconds – yes, this show loves a good moral quandary, and violence, and sexy times, but at its core, I believe The 100 is a love letter to human resiliency. Even though the show depicts so much (and I mean SO MUCH) strife, it also shows how our beloved Squad has made it through, not unchanged, but stronger for it. There’s a certain kind of hope that comes with a story like this, a kind of hope the world needs right now, and OKAY I’M DONE, JEEZ.