So, I know I say this every recap, and every time the answer is different, but.. you know what I love about this show? The continuity. I KNOW, that’s such a boring answer, but hear me out. “My sister, my responsibility” was a callback to season 1, and it HIT HOME, didn’t it?? Weren’t you like… awwwwww shit, right, his mom did a squat-birth and then handed Octavia off to him, so he feels this weirdly intense protective responsibility! OH, and right, Abby and Raven have a special connection, and OH, OH, OH, YEAH, Raven’s mom was the worst, and also remember how Raven is STILL feeling the physical effects of being shot in season 1, and did Kane just mention the culling?? Is he specifically thinking about that adorable freckled father, because I know I am!

*happy sigh* Nothing is forgotten. Octavia isn’t the only one who rewards loyalty, because I’m feeling hella rewarded right now. This show is smart, and she understands that the audience is smart. She knows that we remember what she’s alluding to, and that we pay attention, and that we can piece things together without her guiding us and oh no I did it again, didn’t I? I’m talking about the show like she’s a friend and OMG did I assign her a gender? Someone please help me.

Shall we, ahhhh… photo recap?

Remember last week when I was like, “we don’t know what Clarke meant by ‘take out’ Octavia…” Yeahhhhhh, if it swims like a duck and quacks like a duck, it probably wants to murder your sister. Bellamy was understandably like, “c’mon guys, can we stop with the murder plot on my immediate family, please?”

Then Octavia strolled in all, “The war is a-go!” and we were off!

Emori and the Beautiful Creepster tried to trade McCreary for Raven, but Diyoza was like, “thanks but no thanks,” and then she got Kaned on so hard. He was all, “you are a legitimate antagonist!” and she was like, “am I though???” and then they sexily stared at each other.

More Vincent, please!!! You know what else I love about this show? That  IT, dammit, that it constantly makes me think the characters I love are going to perish horribly. This entire scene I was bracing myself for Vincent to spaz and kill Abby. We are absolutely going to meet this man’s demons. Anyway! Abby figured out that sound-waves break up the abscess faster than a secret Tinder account, but it needed more power, which the beautiful, helpful, charmingly sociopathic Vincent provided. They just needed someone awesome enough to make it work… 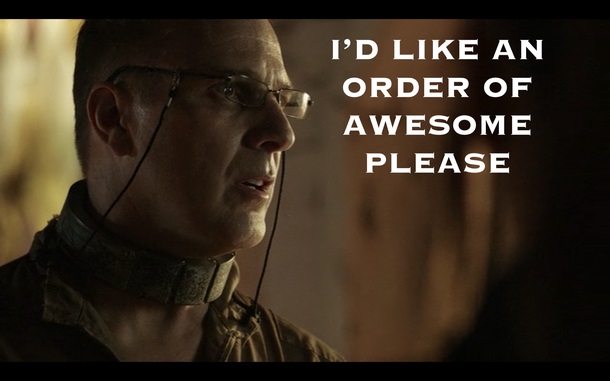 Nice Cop tried to stop her from going, and my heart SANG.

You guys know I love hugs so much, and this scene tainted it. Abby is upsetting me! She let Raven believe that Diyoza was threatening her, so Raven agreed to science the cure into existence. Worth noting is that Echo wants to murder Nice Cop to take out Dioza’s ability to fly, and the entire world screamed a collective, DON’T YOU DARE.

Meanwhile, Clarke and Bellamy were a’schemin’, but they knew they wouldn’t get anywhere without the coolest damn chick this side of the apocalypse. 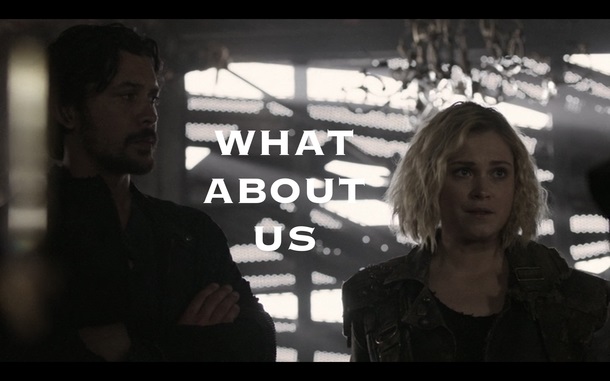 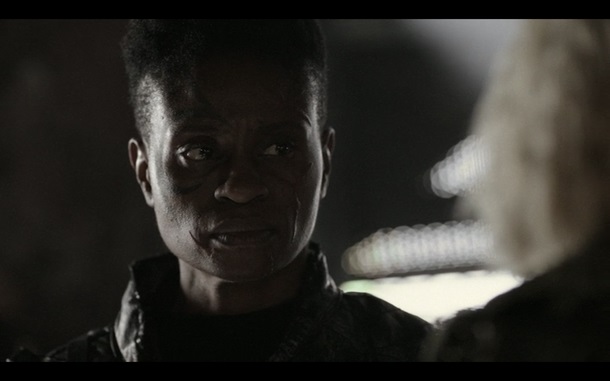 J/K, J/K, J/K, don’t send me any scary hate mail, y’all know I love Clarke and Bellamy. But I mean, Indra just lights up a room, you can’t deny it! Anyway, they asked her to murder some worms, after THEY murder a human, and she was like, “ugh, fine, then quit bugging me.” 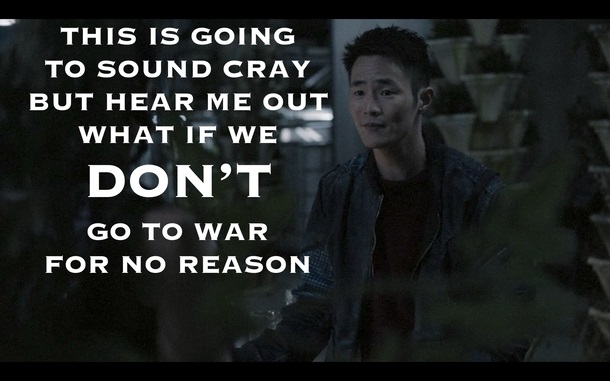 It is very easy to side with Monty on this, because he’s… well, Monty. However who’s to say that Kara would have agreed? Who’s to say Octavia would have listened to her? Who’s to say the crops would have succeeded? Who’s to say singing unicorns wouldn’t arrive with a dozen pizzas? There are so many variables, it’s also easy to see why everyone believes the Valley is the only answer, and that war is the only way to get it. Sure, we, the audience, knows that Diyoza is being influenced by Kane, and would probably allow them all to live if they surrender, but THEY don’t know that, and IT’S ALL SO GRAY I LOVE IT. 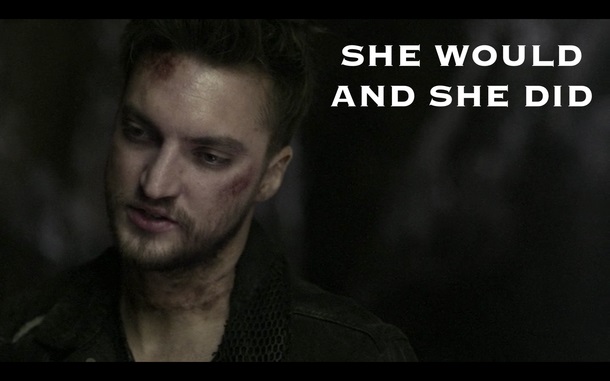 ALLIANCE!!!! The Beautiful Creepster told McCreary about how Diyoza was all, “new phone, who dis?”, so he was like, “nuh uh, I’M the one who got a new phone, and I’M the one who doesn’t know who dis!!!” So he’s going to help them get Raven back, maybe. 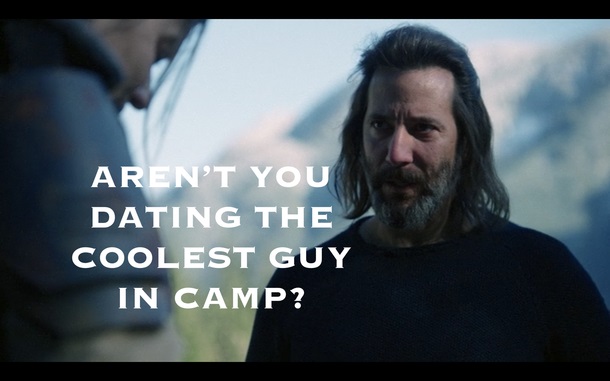 I don’t even know how to feel right now!!! This was a truly beautiful scene where Diyoza admitted to Kane that there’s a baby-on-board, and they daydreamed about their future town. She seems pretty ready to let Wonkru into the Valley and live peacefully, BUT WHO EVEN KNOWS.

Bye Kara! I didn’t mind you!

This hurt my feelings while also making my tummy all oozy. These two! There’s so much hurt between them, but they still love each other so much! Ugh, will these two crazy kids ever work it out? (Please don’t kill either of them, please please please thanks). Anyway, they agreed to go into camp under the guise of being prisoners to get Raven out, because they are the TRUEST OF FRIENDS. And as it turns out, Raven needs the help. 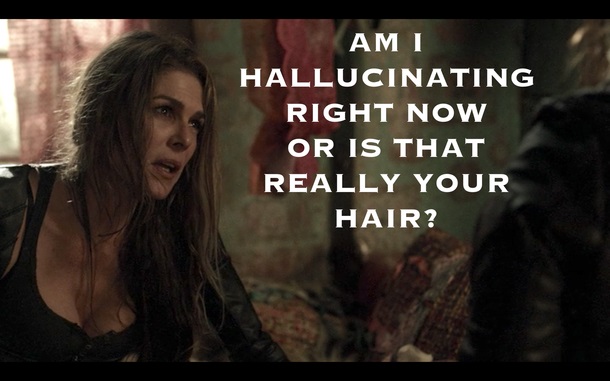 Why does this show insist on hurting my feelings so hard?!?!?! Raven found the pills and figured out that Abby was curing the prisoners in exchange for drugs. She was about to destroy her cure-vention (that is cure-invention, for interested parties), when Abby nectrocutered her!! Ugh, where is the level-headed, polite, delightful Vincent when we need him, ammiright, guys? He wouldn’t have let that happen. #VincentForKingOfCamp 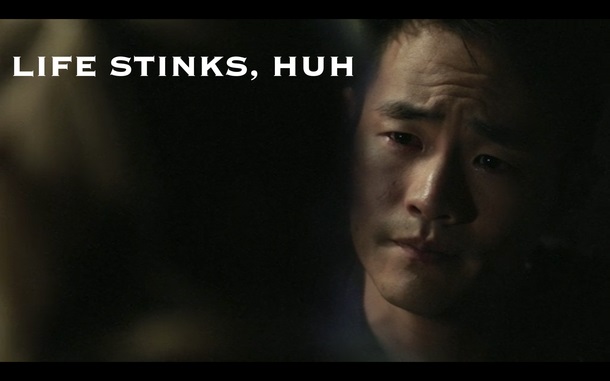 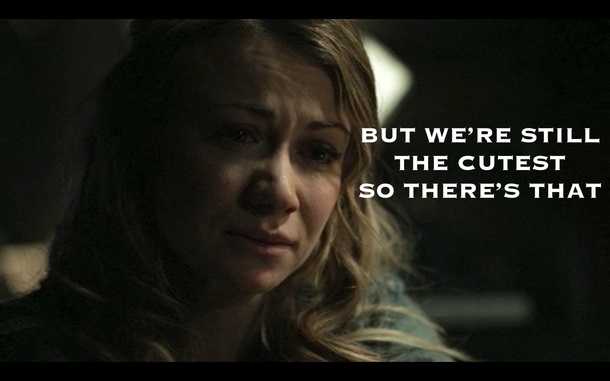 “Everyone dies, Monty. Let’s show them how to live.” aawwwwwww x forever. I’m not trying to sound and hip here (I am), but Monty and Harper are GOALS. They’re going to stay behind and run a farm and be generally most adorable.

Meanwhile, Indra followed the brain-trust’s plan and murdered all the worms.

Octavia ain’t no fool (mostly). She knew immediately that it wasn’t an accident, and who to blame.

Miller (Miller!!) ‘arrested’ Clarke and dragged her off to be executed (MILLER!).

Then, in an emotionally beautiful scene, Raven and Shaw talked about their shared pain in loving an addict, and I simply could not bring myself to add any of my crazy ramblings to their pictures. THESE TWO, ammiright, guys?? I sincerely hope Raven and Echo don’t murder him. 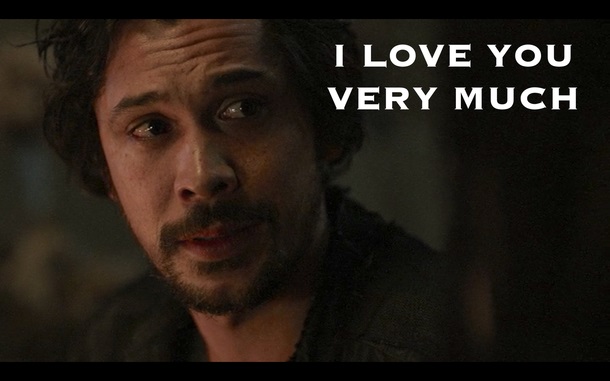 He dosed her food with algae-poison and honestly when she started to hyperventilate I yelled, “DID HE JUST KILL HER!??!!?” because this show has trained me to believe that no one is safe. But he didn’t! She’s just knocked out for a bit. Long enough for the Squad to negotiate “peace” (LOL). 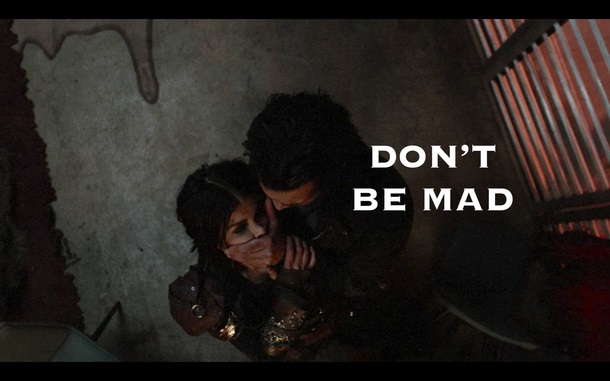 This episode was very good. Very good, indeed. It dove deeper into the characters we already know and love. It tore open their chests and showed us what’s inside of those beating hearts, and THAT is what I’m here for (that plus the hugs).

Okay that’s it from me, see you next week, get home safe!