Skip to content
YOU GUYS! Quick Poll: When was the last time you were this satisfied?

POP QUIZ HOT SHOT – what are my favourite things (besides ice cream)? I assume you all answered reunions and hugs (and red starburst). REUNIONS AND HUGS, YOU GUYS. The whole band is back together, and it is so violently delicious. And Raven and Murphy played soccer! *happy twirl in a field of flowers* I’m not sure how The 100 got a hold of my vision board, but thank you. Truly.

At this point, because it is the case for every episode of this delicious romp of a show, it should go without saying that SO MUCH HAPPENED. I mean, the most important, of course, is the soccer thing, but also all the criminals are awake! And Diyoza’s truuuuuueee colours are shining throughhhhhhhh… and she stole Abby! And Octavia almost straight-up murdered one half of Kane and Abby’s sexual tension. I spent a lot of time this episode screaming, DON’T YOU DARE, and now my throat hurts, and I couldn’t be more happy about it.

Pandora’s Box picked up from the last moment of Red Queen, showcasing Kane’s new ponytail, the allure of which no human can deny. Abby, however, was dealing with a serious case of FOMO. 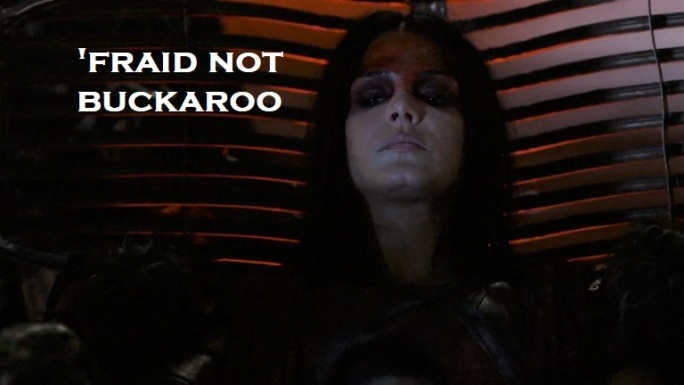 Because his remorse made the crowd uncomfortable with their own moral compass, Octavia was forced to give him a D or something, so he has to do a make-up exam tomorrow.

And that was the COLD OPEN. The opening credits hadn’t even scrolled yet, and we were already watching one of our more level-headed, honourable heroes MURDERING A BUNCH. Hahahahhaha delightful! 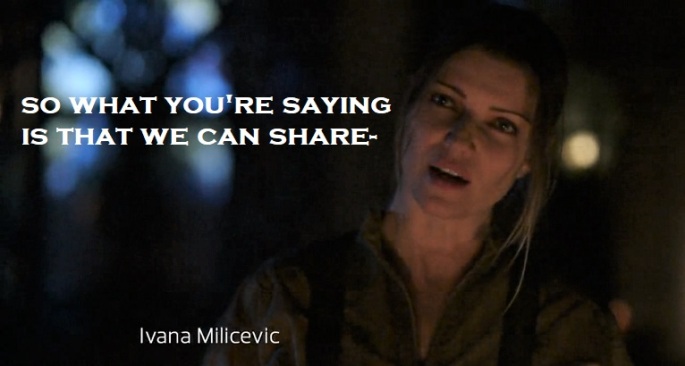 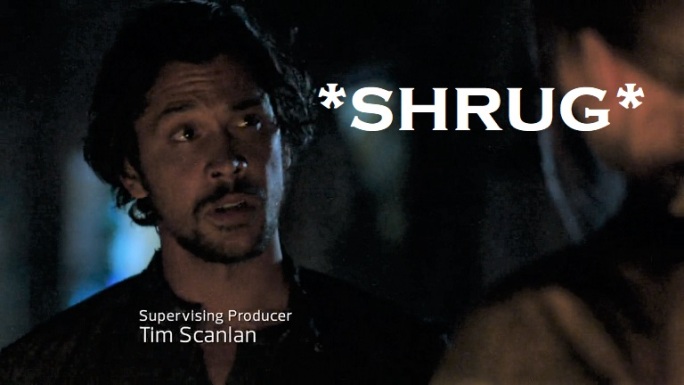 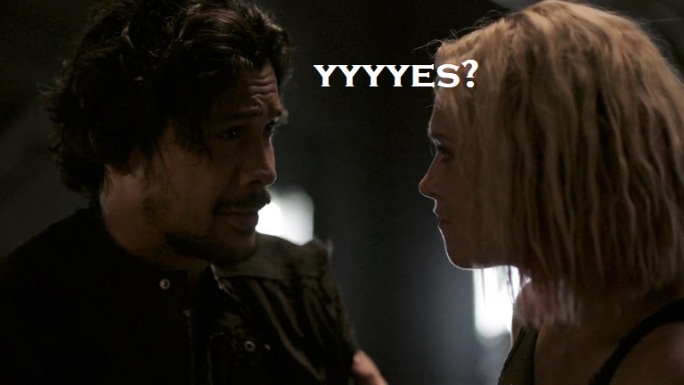 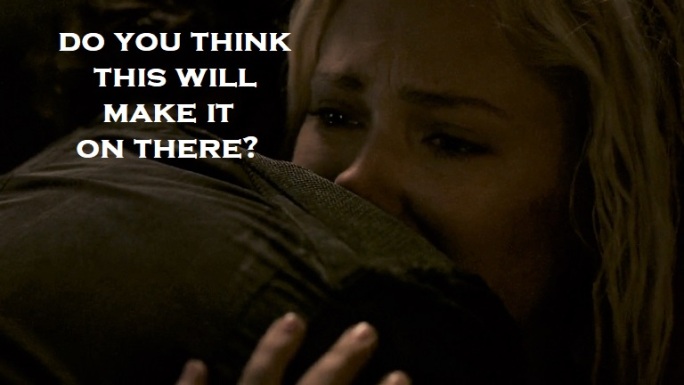 POP QUIZ HOT SHOT – is my crush on Diyoza still raging with the burning passion of a thousand suns? *answers found in the back of the book*. Before the squealing of a legion of shippers echoed through the land, Bellamy propositioned Diyosa to get his sister (and a few others) out of the bunker, in exchange for their 283 criminalsicles. And a deal was struck! Then our two dreamy protagonists-ish-types hugged a bunch and it was MAGIC.

Meanwhile, the Spaceventure Duo was having a great time researching exposition, and letting each other other (and us) know that Diyosa was a Navy SEAL who became a terrorist. 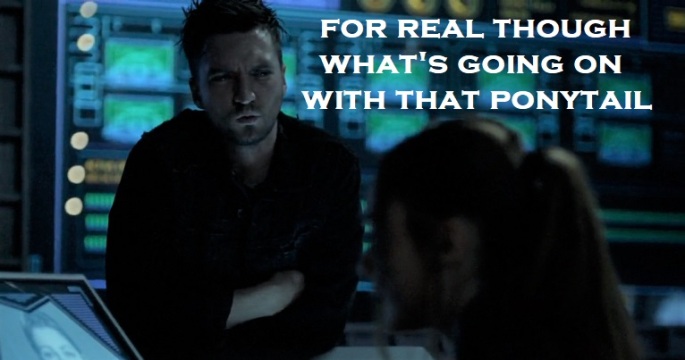 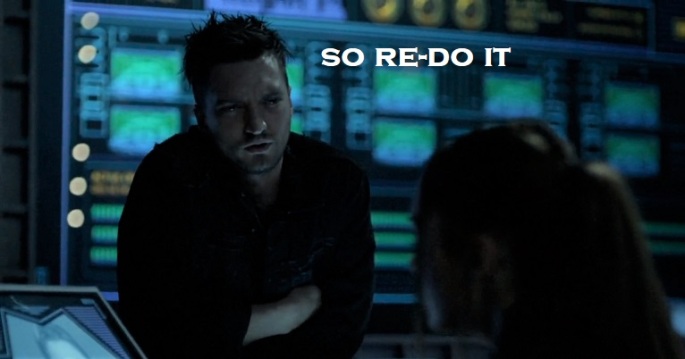 Then Bellamy called to go over the rules of the game one more time, and also to casually mention that Clarke is still alive. 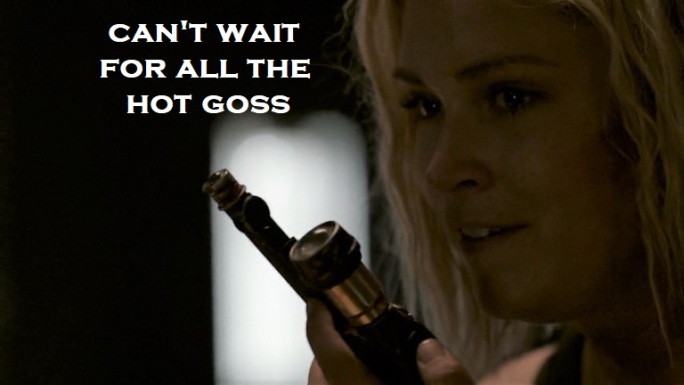 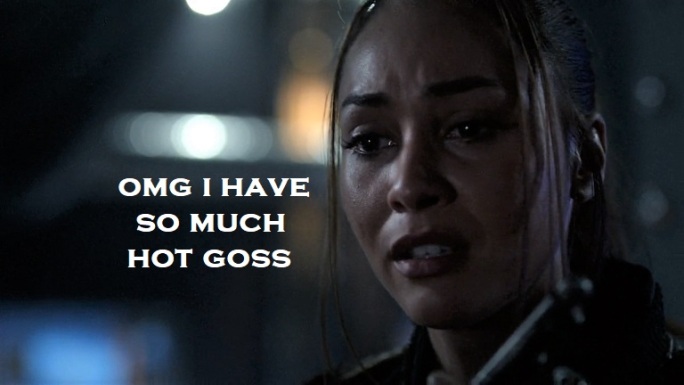 After listening to a very touching radio-reunion, Diyosa and her team were like, “wow, these kids really care about each other. They’re so full of compassion and tenderness. Maybe we CAN cohabitate peacefully.”

Just joshin’. They were like, “let’s steal their doctor-mom!” WHY, you ask? For a cure! For WHAT, you ask? We don’t know! Intrigue!! 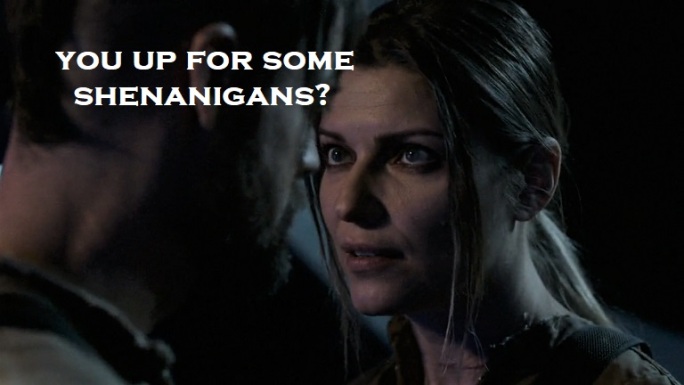 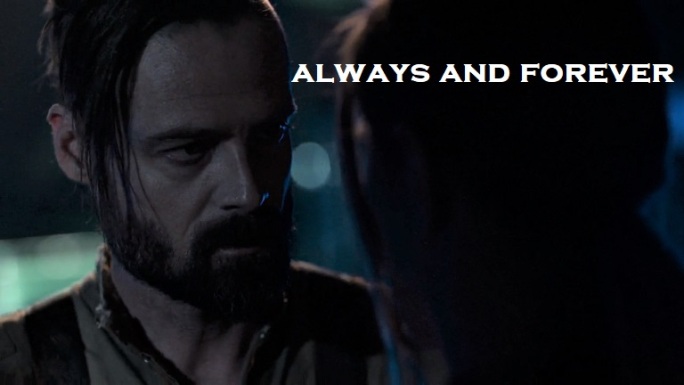 Then Octavia had a super nice visit with Kane. 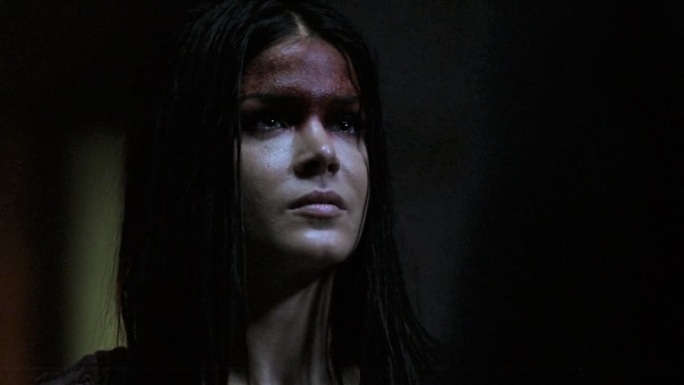 These two! What a time they have. She basically told him that he reeeeeeally shit the bed, but then Kane was like, “k, but, am I the ONLY one shitting the bed here?” and she was like, “there’s no shit in MY bed, if that’s what you’re insinuating,” and then they had a sexy staring contest. Girl is off the deep end and I LOVE IT.

Indra lights up my heart any time she is on screen. I love that she is 100% loyal to Octavia and yet she sees that her girl is going bonkers. She lead Kane to Abby in order for her to convince him not to pull a Peta Mellark, but Abby was like, “I have a confession to make. Who boy, this is hard. *deep breath*, It was I who-” and Indra was like, ‘um, yeah, obvs,” and she left them alone to sexual tension at each other. I. Love. Indra. 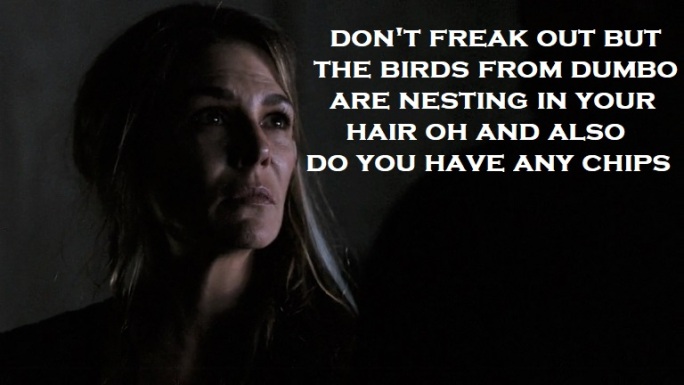 Abby is tweaking!! She’s addicted to pills! To the point where she would steal them and become an enemy of Wonkru.

Up in space, the glorious friendship that is the light that guides us through the darkness was being used to exposition, and I ain’t even mad. Turns out the mining ship is the last of 4 to be sent out, and there’s a mysterious number 3 still out there. #ChekhovsHithelodium

Then we got a cyber meet-cute when Nice Cop tried to hack into Raven’s computer-palace. 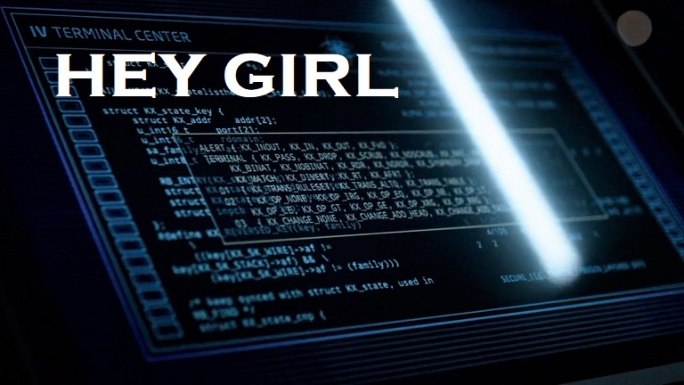 Is it weird that these two characters haven’t even met yet and I already ship it? Anyway, she thwarted him, obviously. The Beautiful Creepster was all, “ohhhhhh boy, do we get to kill them all now? Is it time? Eeeeeeeeekk I didn’t think I’d be this nervous! Okay, one… two…” and Raven was all, “DENIED, FOOL!” because she clearly isn’t as into mass murder as the rest of her friends.

Meanwhile in Bunkerville, Octavia was making Kane do his make-up test, but he was throwing his version of a hissy. 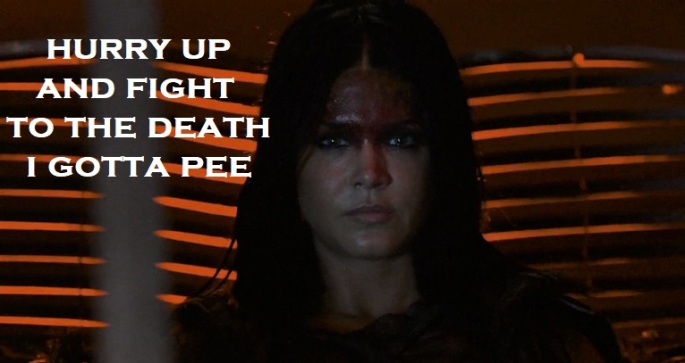 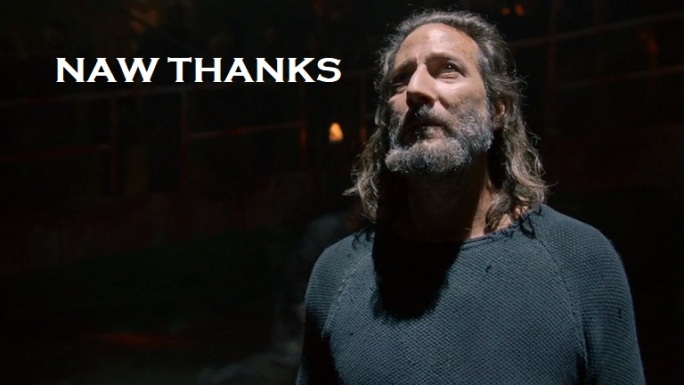 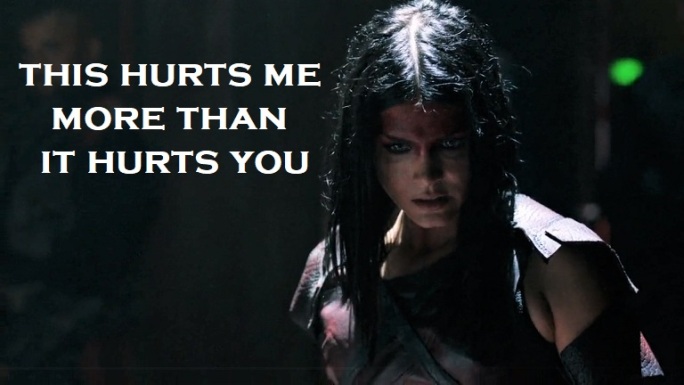 Octavia was about to straight-up murder Kane!!!! You could tell she didn’t reeeeeeeeally want to, but she was GOING TO. Oh man, Octavia, I worry about you and it is DELIGHTFUL.

BUT THEN – just as Octavia was about to plunge her sword-of-a-thousand-or-so-deaths into our beloved Kane, guess who dropped in!

THIS GOT ME, okay, show, are you happy??? Octavia muttering “I knew you’d come” was a LITTLE TOO MUCH on my emotions. She may be the Red Queen, she may be a little on the bonkers side, and she may have been seconds away from murdering a hunky father figure, but Octavia is still a little sister, and her hugging the one person who reminds her of who she really is GOT ME REAL GOOD. 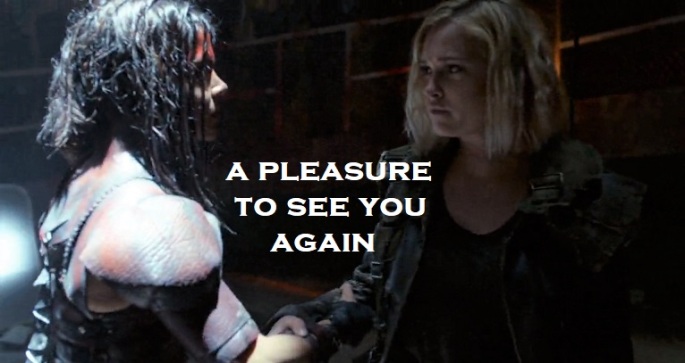 HAHAHAHHAHA did these two bump into each other at a conference? This was perfect. These two awesome kickass ladies have never been close, and a hug would have been forcing it. Well done, all. 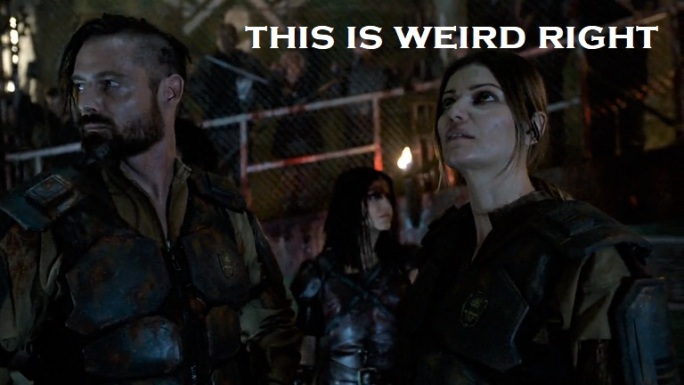 I loved the glances that Diyosa and Bellamy were giving each other when taking in the sights of Bunkerville. Like, they may be sort-of-enemies, but that doesn’t mean they can’t be united in their social discomfort. Anyway, Octavia was like, “ya’ll bad guys?” and Bellamy was like, “who them??? Hahahahha nooooooooo!”

Up in space, Raven caught the Beautiful Creepster creepin’ beautifully in a dead person’s tiny sleep-home and then they got to the bottom of the REAL reason he stayed behind. 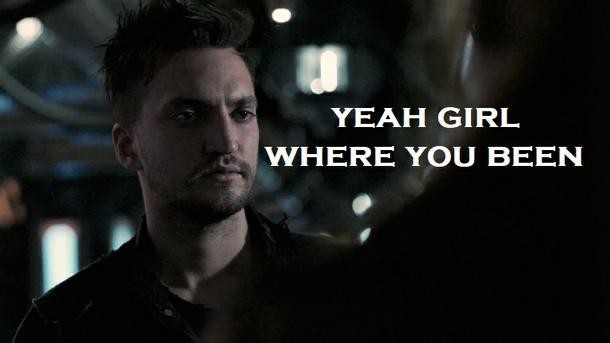 Murphy stayed behind so that Raven wouldn’t have to pull the lever, and OH MY HEART. This friendship is maybe the greatest gift The 100 hath ever bestowed upon us.

Then, in yet another beautifully satisfying reunion… 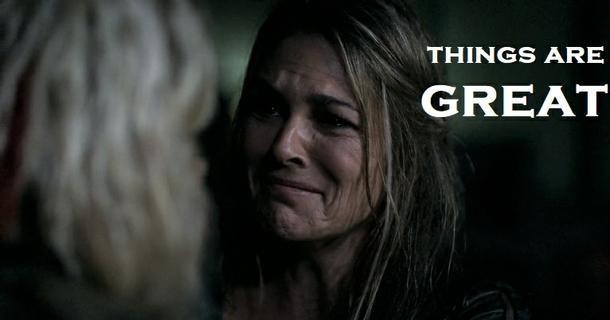 Abby pulled a classic mom-move and swept any possible emotional baggage under the rug in order to carry forward the plot / thanksgiving dinner, but I SEE YOU ABBY, and I worry.

Then Octavia took a ride topside, and Gaia (HI GAIA!) had everyone chant their drinking song, and it was intimidating and a little creepy? I LOVE IT. 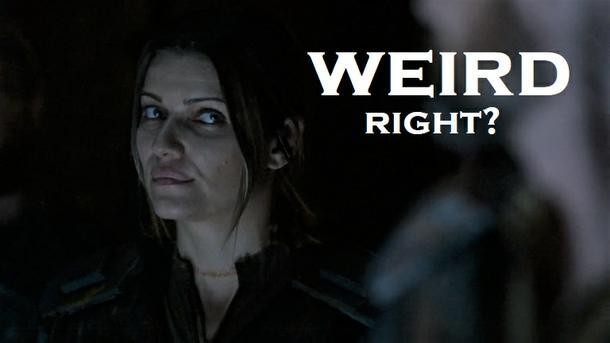 Look, I know there wouldn’t be a show if everyone were friends, but just IMAGINE these two being pals, okay? It’s so good, isn’t it? Skeptical sassy looks, deep-voiced badass quips, heroic adventures, playful kerfuffles… *sigh* 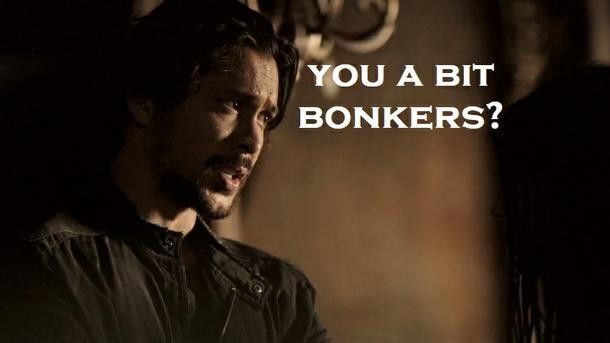 Bellamy tried to rap with Octavia about how she’s even more in love with murder than when he previously saw her, which he likely didn’t think possible, but she was like, “ain’t nobody got time for that, byyyyyyye.” And while this cute sibling reunion / intervention was taking place, Indra was sneaking Kane from the bunker because INDRA IS THE BEST AND IS NEVER ALLOWED TO DIE.

Murphy and Raven opened the pods!! So Giyoza was forced to close the doors to save her own people. 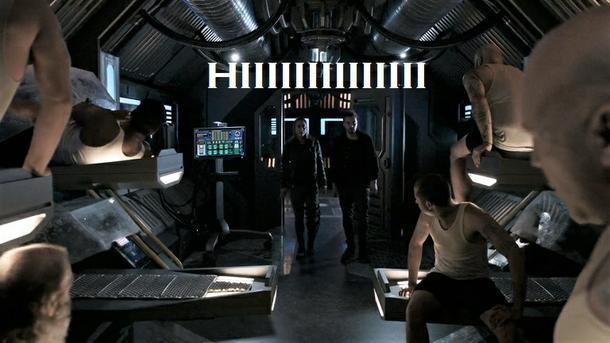 If this isn’t a recipe for a sitcom, then I don’t even know who I am anymore.

Back on earth, things got a smidge tense when Diyoza was like, “actually folks, I AM a bad guy! (or am I?)” and she started shooting the place up. And Bellamy was all, “BUT!” and Diyoza was all, “NUH UH, SUCKA”, and then Abby and Kane ran in and were like, “omg relax.”

It’s a win-win! Diyoza gets her doctor and Kane and Abby’s Sexual Tension is safe for another day! Sure, Abby had to abandon the daughter she was mere minutes ago reunited with, but hey, welcome to The 100!

This is gonna be goooooooooood!!! Octavia wasn’t super thrilled about this whole situation, especially after one the crazier Prison Peeps shot at her with his future-boom-stick.

Oh, and the Prisoner Peeps tried to shoot some missiles into a crowd of innocent people, but ‘Raven’ jammed their signal (maybe? Or was it Good Cop?), so Diyoza was like, “let’s go meet this Raven.”

EIIIIIEEEEEEEEEEEEEEEEEE YOU GUYS! Do you think they’ll meet her and every single one of them will instantly fall in love (who wouldn’t), and then they’ll all team up and stop global warming? I do.

What did you guys think??? Are you wildly satisfied? Are you filled with delightful anxiety? ME TOO!