How’s everyone doing? Are your heebies jeebying so very hard? Are you constantly flipping away imaginary bug-worms from your entire body at all moments, only to figure out it was a wisp of your own hair, or a brush of your Spongebob Squarepants pajamas? Are you SO MAD at The 100 right now for fueling your nightmares, but then, like, you can’t stay mad, but then you remember and you get mad again, but only for a bit because you JUST CAN’T STAY MAD?

You guys! Hi! This week’s episode of The 100, Shifting Sands, was super duper gross and 117% disturbing in all the ways, but also… kinda fun? There were so many great lines! So much sexual tension flying all over the place. So many… (you know what I’m going to say, let’s not pretend I would ever say anything other than…) HUGS. So many hugs. You know that’s what I’m here for. I guess I’m apparently also here to be psychologically damaged, so let’s get to recappin’ shall we?

WELP, this episode has already won, ammiright?? But then Miller started marching away like a robot, not even acknowledging our two maybe-protagonists, and it kind of hurt my feelings. 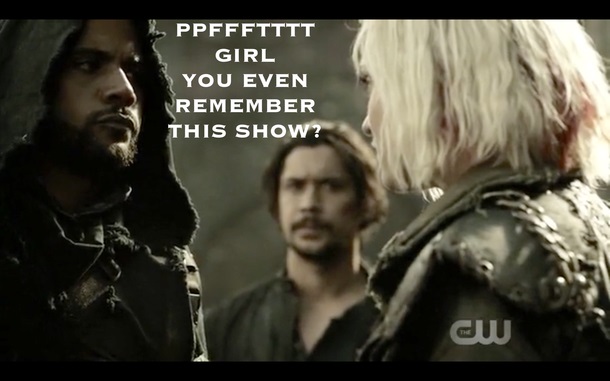 She figured out fairly quickly that Miller was going to scout ahead for the army, and she was like, “Boy, you think you can go on an Adventure without the Captain of the Adventure Squad? LOL FOREVER.” So she barged in on Octavia’s scene and started giving her the what-for on why her plan is terrible. 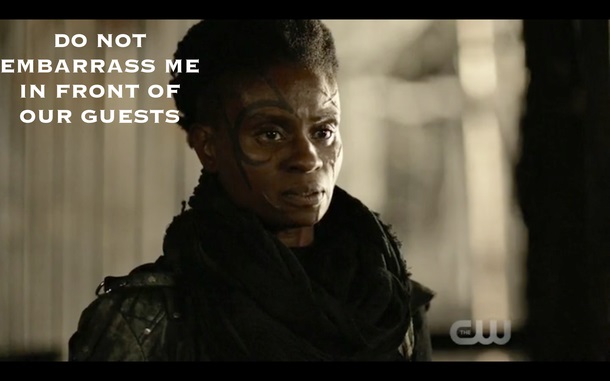 Octavia did not give a single hoot about anything Clarke was saying! Girl just wants a war, and she doesn’t care about the particulars. And the thing is… I get it! Octavia may seem cold (read: bonkers) now, but she’s responsible for over 800 lives, and has been for a long time. The Valley is the way to continue keeping those people alive, even if some have to die on the way there. I mean… YIKES, but also, yeah? This is why I love this show. Cause GRAY IS MY FAVOURITE COLOUR, I FELT SO SYMBOLIC YESTERDAY… (I bet Octavia would love the Counting Crows, and nothing anyone could say or do would convince me otherwise).

ANYWAY, Indra was all, “your relationship with your sister is the beating heart of this show and I’m here for it.” and Clarke was all, “when’s lunch?” and Bellamy was all, “a six day hike through sand storm country with a gladiator cult… sounds like ADVENTURE SQUAD O’CLOCK to me!!” and then they high-fived. And off they went!

But then we saw that Bad Guy Crew (still workshopping that title), were watching them on the television!

Ohhhhhhhh this guy tried to pull a Beauty and the Beast and was all, “Let them come”, but then Diyoza was like, “that’s dumb and you’re dumb, and you’re not the Beast from Beauty and the Beast so stop trying.” Then they casually mentioned that they used to bone, and Nice Cop was like, “I wish I was anywhere but here.” Okay maybe he didn’t say it with words, but he said it with his eyes. His dreamy, dreamy eyes…. Hm, what? Oh right.

The Criminals were acting up when Diyoza got home, so she tough-loved at them.

For real you guys, I loved this so much. I think this may have been my favourite scene of the evening. A bunch of hardened criminals acting like teens, listening to music, bench pressing heavy machinery, and making out in the bushes (I assume), and Diyoza struts in and enforces the NO FUN rule??? THE PARALLELS I JUST CAN’T. ‘Member in season 1 when Clarke made everyone stop having fun in order to listen to her talk about food? *sigh* I’m having a good time. Are you guys having a good time?

We met up with Kane and Abby’s Sexual Tension, who was admiring Clarke’s artwork (like in the first episode, remember? Okay I’ll stop).

Then we met a fun new character with an necktrocruter on, who can’t control his criminal urges (let’s hope they’re embezzling, or like, tax evasion), and he was all, “if the demon comes out, pull the trigger” (actual line in the show – *slow clap*) 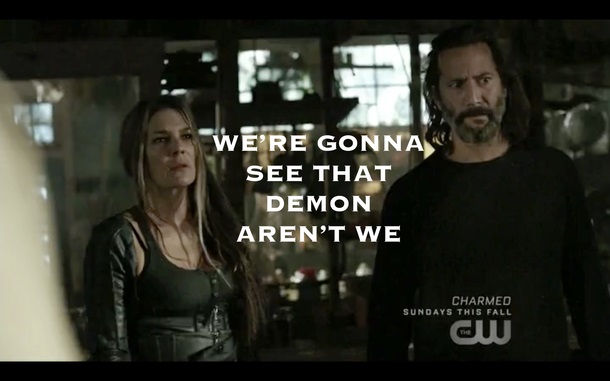 What a strangely charming psychopath! This man is perfectly cast, and I give high-fives to all involved, but especially this man, because DAMN, sir, you are both handsome and hella creepy. The fact that he didn’t hulk out this episode means he will ABSOLUTELY go bonkers in the next. Or maybe the next! Doesn’t matter when, just definitely look forward to seeing this inexplicably compelling man go wackadoo. #Checkhov’sDemon

Anyway, then Kane offered up his services as Diyoza’s own personal Google search engine.

She wasn’t having it because I guess traitors aren’t as reliable as they used to be. Elsewhere, Clarke and Bellamy were having a nice campfire chat. 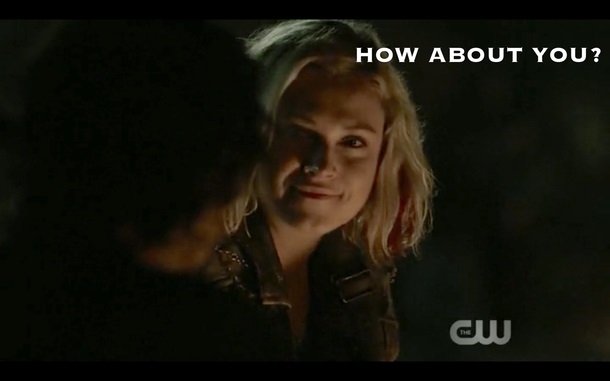 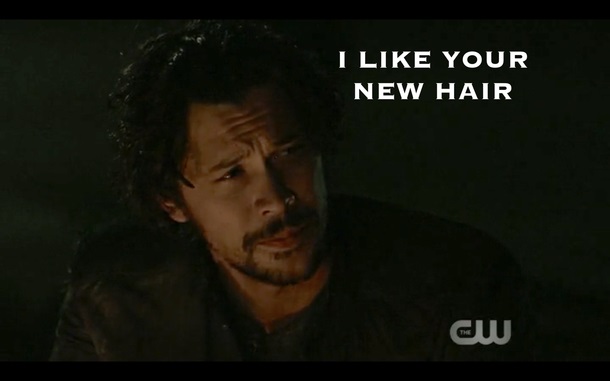 I truly love these two together, I don’t care what form it takes, romantic, friend-antic, co-leader-antic, whatever, so when Clarke was like, “isn’t Octavia the best though?” and Bellamy was like, “pretty sure YOU’RE the best,” I will admit that I squealed, because I am A HUMAN BEING YOU GUYS. 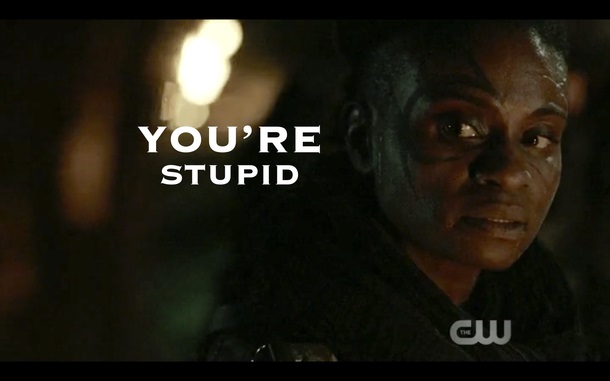 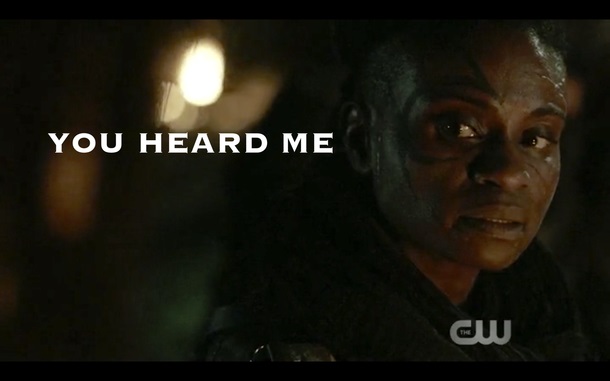 This scene made my heart sing with the obnoxiously loud confidence of an amateur church choir. Indra is THE BEST, and she was all, “I love you, does that make me weak?” and Octavia didn’t have a cold-ass sassy remark for that, and I just love her, I love her, I love her.

Anyway, the scouts returned and they did not have great news.

This fellow had a very rude uninvited guest worm INSIDE OF HIS BODY, and I am upset. This has upset me. I need some ice cream and chamomile tea. Is there chamomile ice cream? UGH ANYWAY, then Octavia was like, “we should probably just kill him, right?” and everyone was like, “damn, girl.” and she shrugged all, “the war is still on, nerds!” 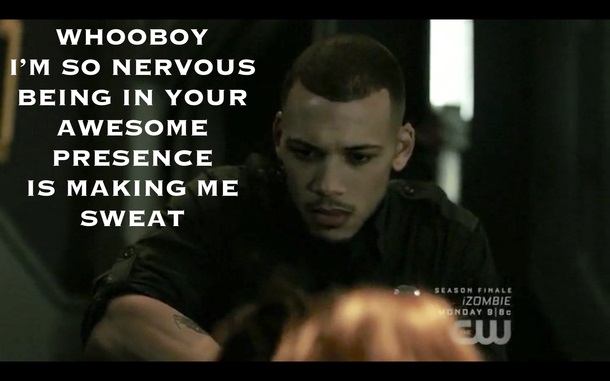 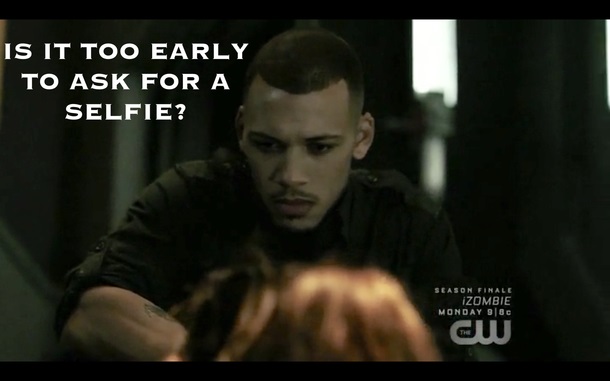 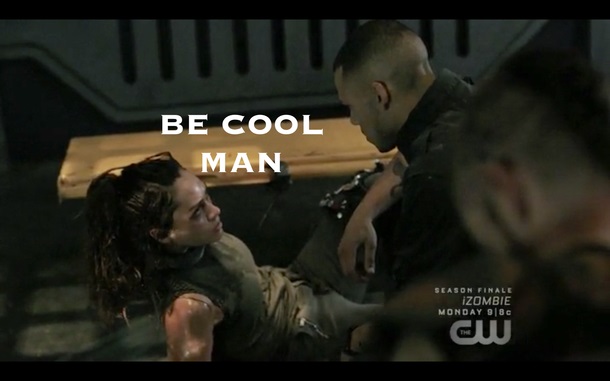 It’s happening!!!!! Good Cop stopped McCreary from murdering a bunch, then admitted to our beloved best friends Raven and the Beautiful Creepster that (as we suspected last week) it was HE who blocked the missiles, thereby preventing the annihilation of most of the human race. Then they all got to schemin’ 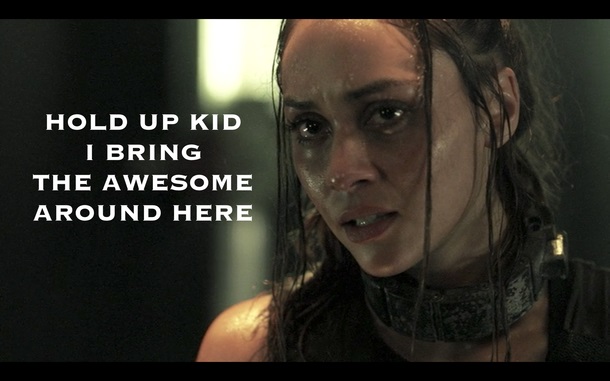 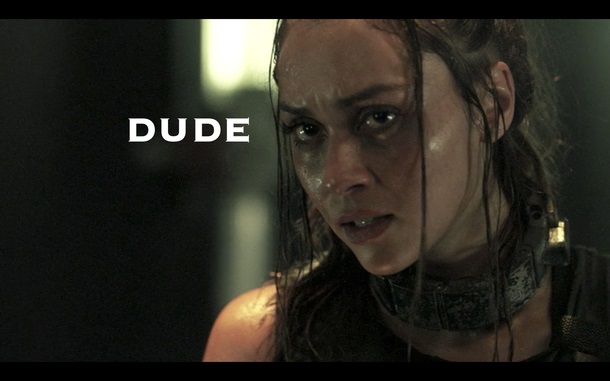 Meanwhile, Kane was like, “will our sexual tension cure your drug addition?” and Abby was like, “unlikely,” and then Diyoza came in and told them that Abby was being tested to see how smart she is, and she passed! 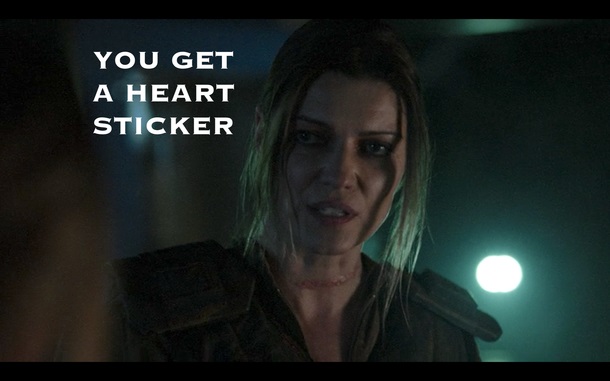 Then Kane, being Kane, Kaned all over Diyoza and she was like, “trying to save every single person while also being dreamily nobel is your shtick, isn’t it?” and he was like, “yes, it is.” But she still wasn’t having it, because look who barged in to tattle. 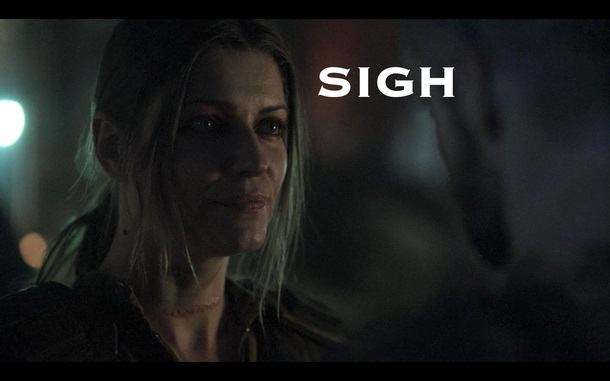 Nice Cop snagged the win by being all, “I got ‘em on the run, boss!” and Raven got all upset because now they can track the Beautiful Creepster and find all their friends and blow everyone up, and Nice Cop is a total bad guy OR IS HE???? That was fake, right? Raven was all, “You son of a bitch *WINK*” Right??? I’m right.

The Beautiful Creepster was reunited with the Spaceventure Squad, and it is it weird how happy that made me? It’s only been a few days! I need to stop living for reunions, except I WILL NEVER STOP. Anyway, he told them what’s up and they skedaddled. 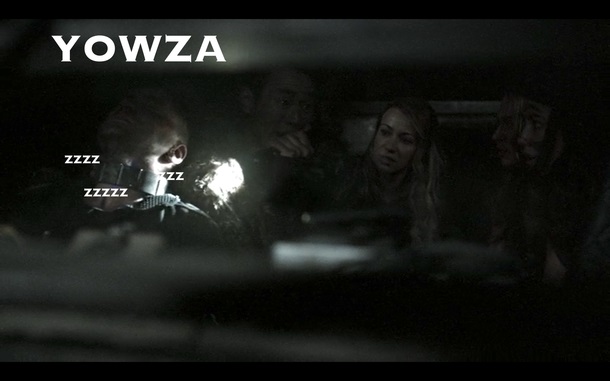 The necktrocutor started a’buzzin’, which meant it was the Beautiful Creepster’s stop. But then a certain ninja turtle joined him! 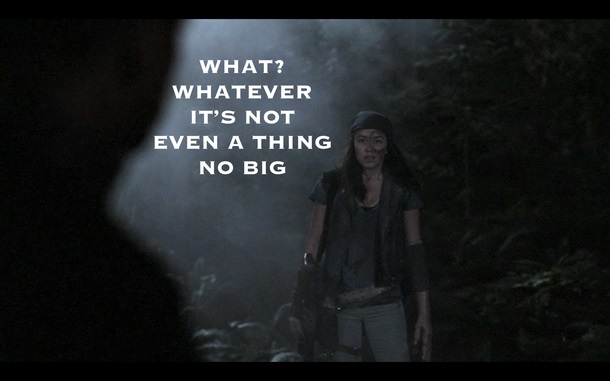 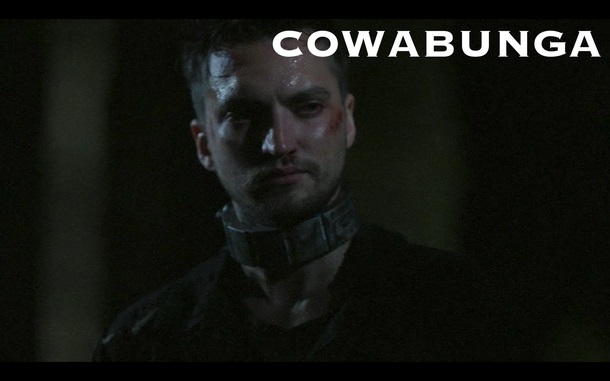 VERY pumped to see where THIS leads us next episode! 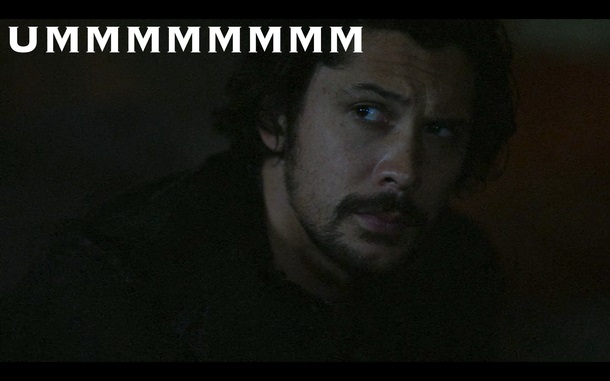 Clarke was all, “K but for real, YOU’RE the best.” And it was very nice. But then they were interrupted by a glass-shard-sand-storm, and a bunch of acolytes who get very trigger-happy every time Bellamy talks to his sister. What a romp!

One of these BUG WORMS OF DEATH hopped into Octavia and it goes without saying that it was UPSETTING. 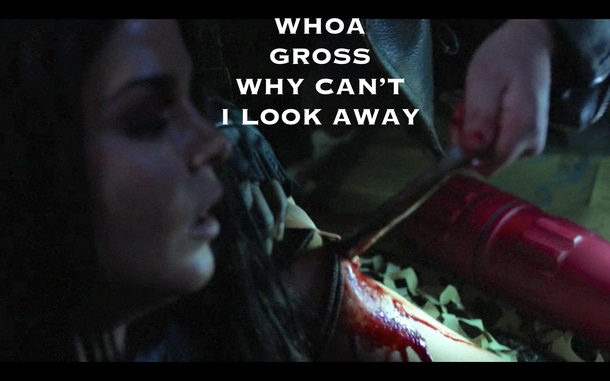 Can we take a quick 6 hours to appreciate both of these badass women? Clarke just dove right in there and pulled a mutated bug-worm out of Octavia’s arm! And Octavia was all, “well THAT was a ride, ammiright, guys? Anyway, what’s next in my calendar? I’m a very busy woman, let’s wrap this up.”

Turns out the next thing on her to-do list was form a human shelter in a sand storm in order to evade a missile attack. You know, AS ONE DOES.

I know this isn’t news, but Wonkru is scarrrrrrry, you guys. Anyway, it worked! Only about a dozen or so people died horribly, when it could have been everyone, so… win? 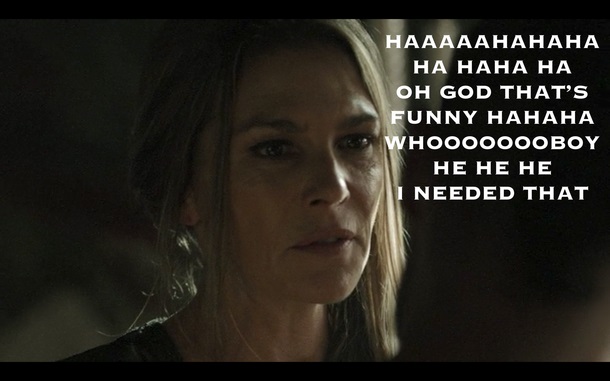 McCreary is one of the sick ones! And he thinks he’s going to survive long enough for a cure! Awwwwwww, that’s cute.

Not to be outdone, Diyoza was like, “whoa, I want in on some of that sexual tension!” 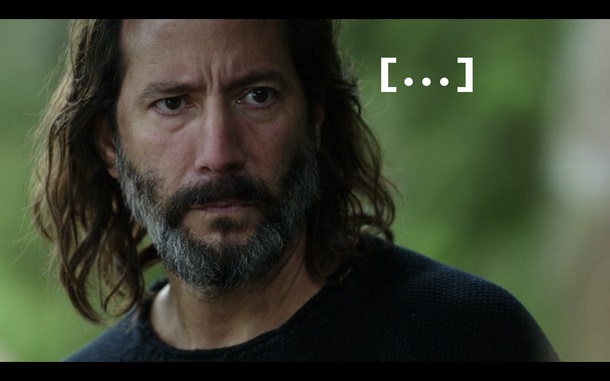 For real, when Diyoza was like, “that’s between you and your wife,” and Kane was all, “Abby’s not my wife,” I screamed, “ON A TECHNICALITY, KANE HOW DARE YOU.” Anyway, Diyosa is considering a Criminal-Wonkru team-up, but first she wants all the hot goss on Octavia. My guess is that she doesn’t believe Wonkru will behave unless Octavia is dead – mainly because this is only episode 5, they can’t work shit out just yet.

Speaking of Wonkru, Octavia accidentally let some human emotion slip through when she thanked Clarke for being a total bad ass and saving her life, then Bellamy was like, “Can I get in on some of this, he he?”

HAHAHAHAHHAHAHAAA WHAT! I mean, sure, this makes sense, but STILL. This was hard to watch. Octavia is (justifiably) a scary dictator, and it’s uncomfortable and upsetting and delicious and I WANT MORE.

Then the rest of the Spaceventure Squad showed up and it was ELECTRIC!

DEEEEEELIGHTFUL! I’ll be honest, I sort of forget why Octavia hates Echo so much. Is it because she shot Ilian through the neck? (RIP you sweet, beautiful doofus). Or is it because she was cheating during the conclave? You know what? I don’t even care. This is magic. The tension! The suspense! The drama! I know I say this every week, but I simply CANNOT WAIT for the next episode!

How are you guys doing? How are your hearts and your psyche? On a scale of 1 to “ice cream won’t even help”, how upset are you right now? Season 5 is assaulting our minds, bodies and souls, and I am NOT mad! Everything is gray! Everything! Octavia is our heroine, but also a legit monster! The villain is compelling as hell, and even the creepy demon-possessed red-shirt bad guy is uncomfortably charming.

And that’s what this show does best, doesn’t it? It create characters that make us think, and doubt, and scream and cry and laugh. I’m on record as loving this show so damn much, but I’m also pretty loudly on record for pointing out any flaw I can shake my snark at, and there have been many, because it’s impossible to create something this big without making some mistakes along the way.

But you guys… is season 5… is it… flawless? Is it the best season yet? Should every human on the planet be watching this show? WHAT IS EVEN HAPPENING?!?!?!

Okay I need to go take sixteen showers and then gently rock back and forth for a bit.

Okay see you in two weeks, follow your dreams!
[Originally Posted May 2018 on tv.com]