AWWWWWW SHIT GIRL! Emori! Abby! Octavia! The girls be getting it DONE this episode. And the boys be… trying at least? Poor Bellamy. Poor Kane. Poor nameless stranger who is about to be baked not fried.

Quick question – was Gimme Shelter the best episode of this season so far? I know, I know, there’s some pretty hefty competish since season 4 started picking up steam, and not a whole lot happened this episode to propel the plot, BUT it was very stressful and sexy! I was 100% engaged in every storyline. Sometimes checking in on our beloved Adventure Squad’s emotional state is worth an hour of our time, you know? Did I miss Monty, the gorilla, and our newest power-couple Luna and Raven? OF COURSE I DID, I’m not a monster. But apart from that, I’m going to say, if I may be so bold, that this episode was perfect. It had just the right mixture of guilty angst, murder, sexy times, sass, moral quandaries, naps, and a light dusting of subterfuge.

Let’s dive in, shall we?

The episode began with one of my favourite characters – Octavia’s sassy horse.

Ilian didn’t have to find Octavia, she jumped out at him and put a knife to his throat. Grounder flirting is strange, but I’m not here to judge. Anyway, then the black rain started, and Octavia decided to give Ilian a ride. 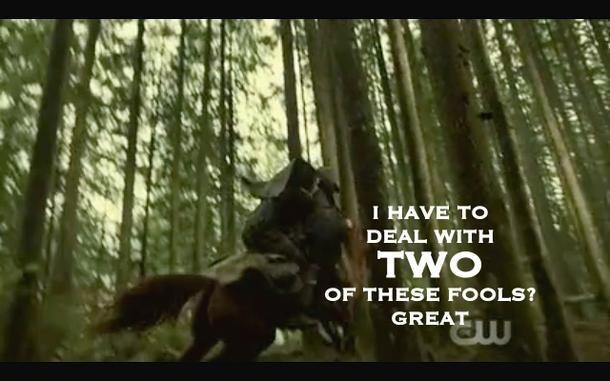 The storm then moseyed on over to Ark Camp and they all filed inside in a calm, orderly fashion. J/K this is a television show, they stampeded into the Ark like Nova Scotians at the grocery store before a snowstorm. #StormChips 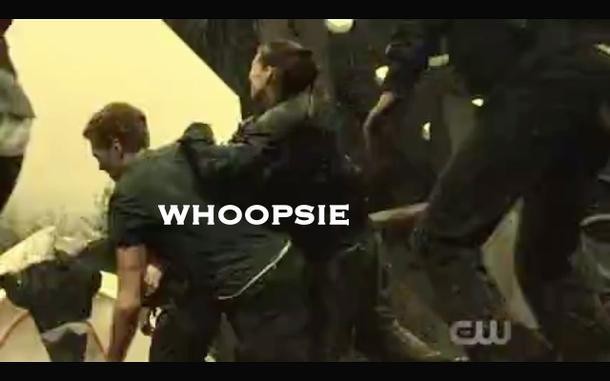 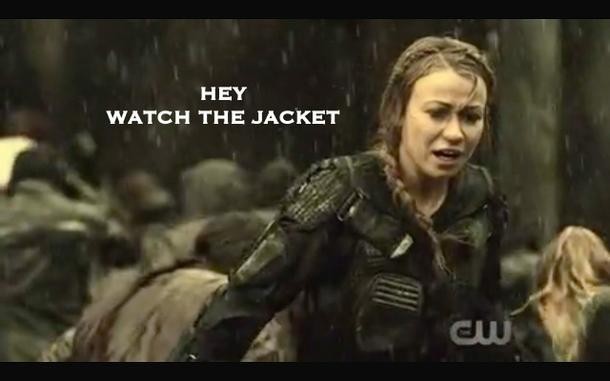 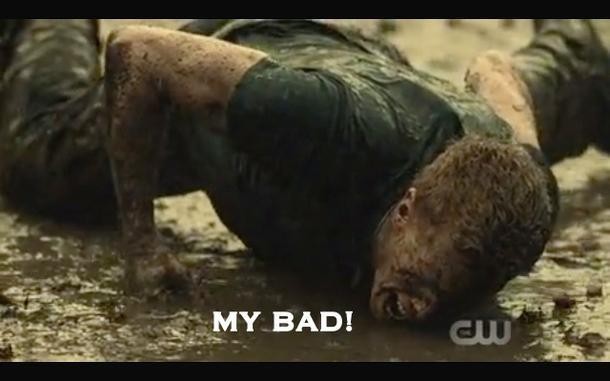 This gentleman was falling, reached out to Harper, and instead of rushing back to help him, she ran inside. This began what was to be a theme of the evening – what exactly IS our responsibility to others when our own lives are also in danger? Hmmmmmm??? No, I’m really asking, because if there were only 3 fruit roll-ups left in the world, I’m sorry guys, I would slit your achilles tendons to get to them.

Anyway, then they all starting taking their clothes off and NO ONE was angry about that. Oh, and Kane and Bellamy rescued the dude who dared to muss Harper’s jacket. More importantly, though, can we talk about how luxuriously Kane flipped his hair while washing off? 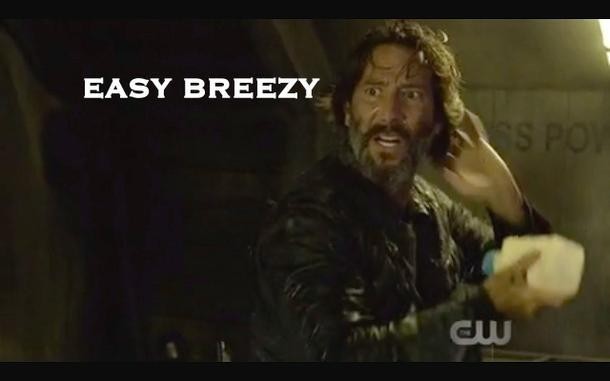 Hahaha, KANE! Stop being so dreamy. Then he told Bellamy that Octavia took off with her sassy horse, and a fan favourite trope from season 3 was brought back… Bellamy and Kane sexy staring contests! 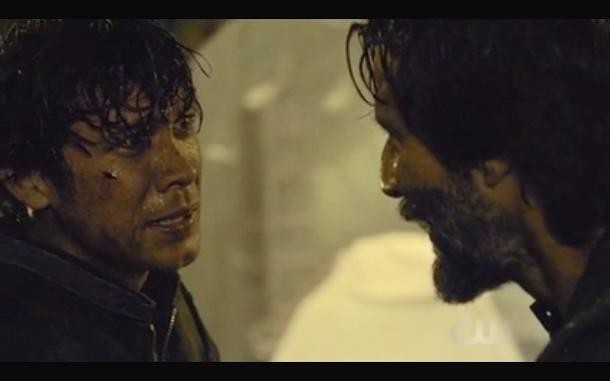 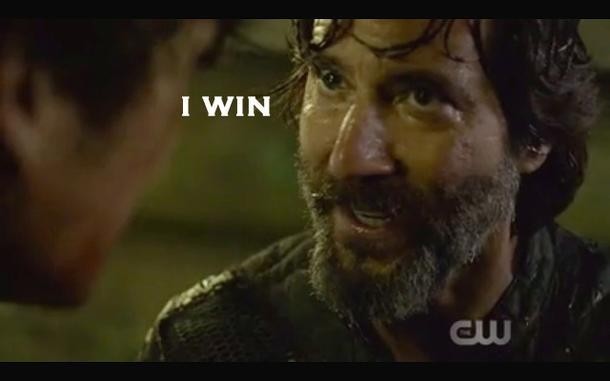 Octavia and Ilian found a cave with fresh water (lucky!) and then they, too, proceeded to take off their clothes. You guys, black rain is even more effective than truth or dare.

I was not mad about any of this. Then we checked in on ALIE island. 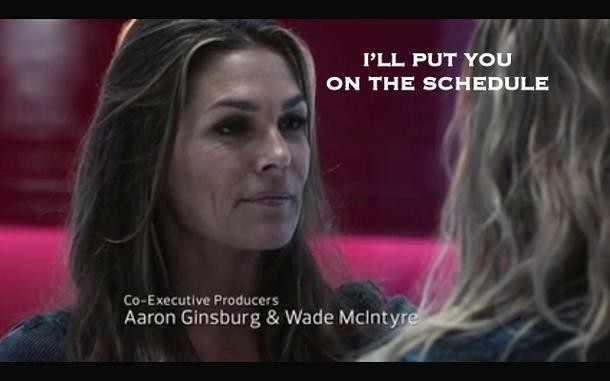 This moment was very sweet. “I just needed to see my mom.” Ugh. You win this one, emotions! 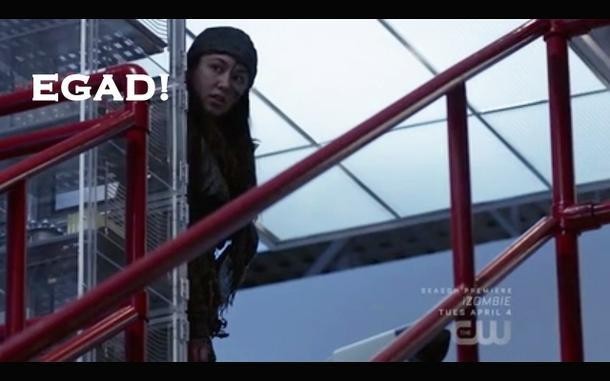 Abby came up with a way to save everyone with Luna’s bone juice, but first they need to test it on someone using all the murder. Meanwhile, Emori was creepin’ on them like a wily ninja (turtle). Honestly – her and the Beautiful Creepster are made for each other. 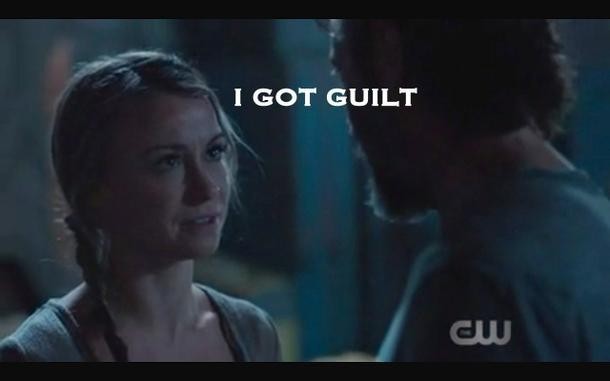 Hahaha, Kane did NOT care. Harper was obviously dealing with some shit, and if we were in her position, I’m sure we’d also be feeling pretty crappy about not helping someone in need. BUT if we look at in relation to the world of The 100… did she go bonkers and massacre a friendly army? Did she murder an entire community of people with the pull of a lever? Did she inadvertently get her relative’s boyfriend killed? No? Then Kane’s Dad-ing was needed elsewhere. 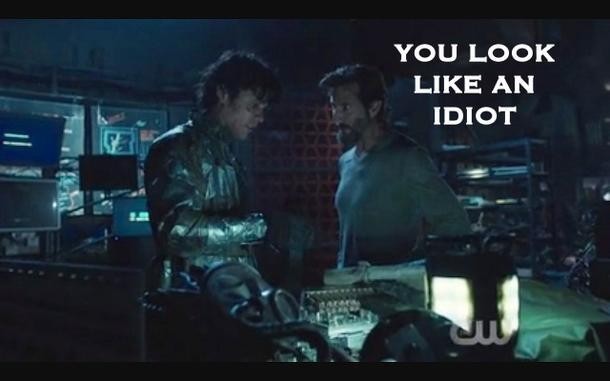 In a nice juxtaposition to Harper’s current situation, Bellamy was taping up a damaged hazmat suit and jumping into action to save a couple of off-screen father/son damsels who were stuck in the black rain. Apparently the kid was one of the Hundred, and all I could think was THANK GOD it’s not our precious Tim Bartlett. That would have been too much to handle. 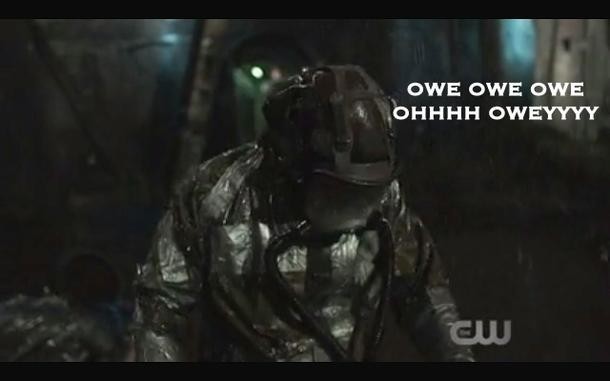 The suit was useless! Bellamy got burned UP, but he made it to the rover and did NOT strip down completely, which, okay fiiiiiiiine, I guess. Anyway, Kane wanted him to come back, but Bellamy had some hero-ing to do. 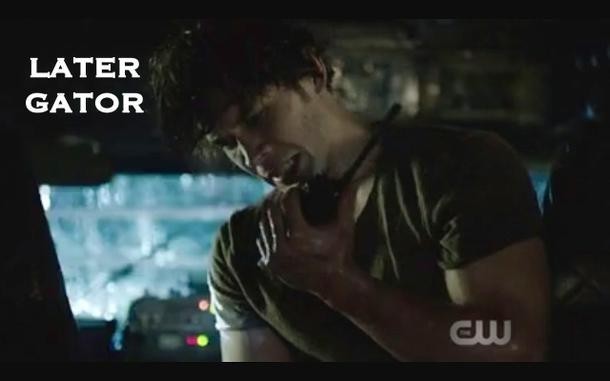 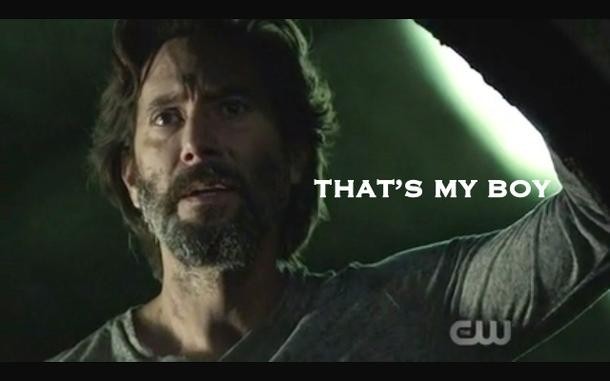 Kane looked worried and mad and proud all at the same time. His new Dad role is my favourite thing. 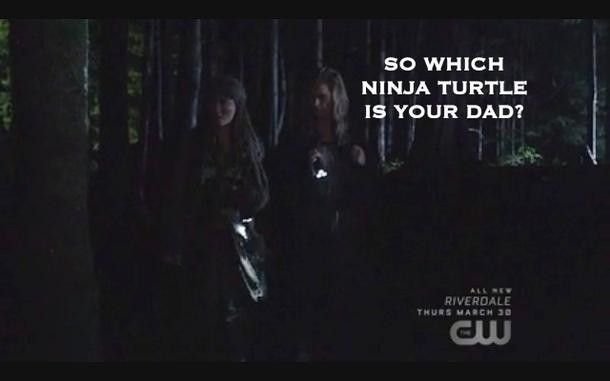 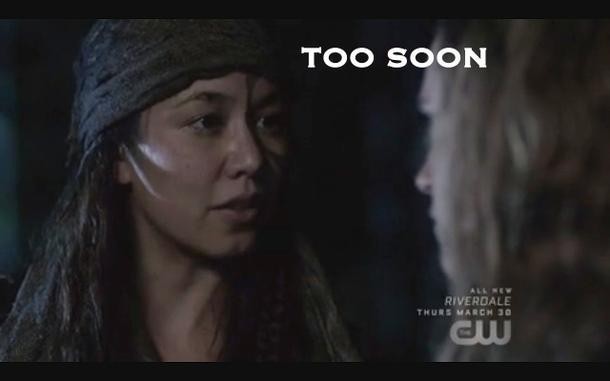 Guys, I loved this. Has Clarke ever interacted with Emori?? Is this their first meeting?? These two ladies are both awesome, and very different, and I want more!! They went into the house and the Beautiful Creepster fed Clarke something he was cooking, and they both smiled and quipped. Take a quick second to remember season 1, and then think of how far these two have come, and I DARE your heart not to explode.

Anyway, then Clarke gave herself a tour. 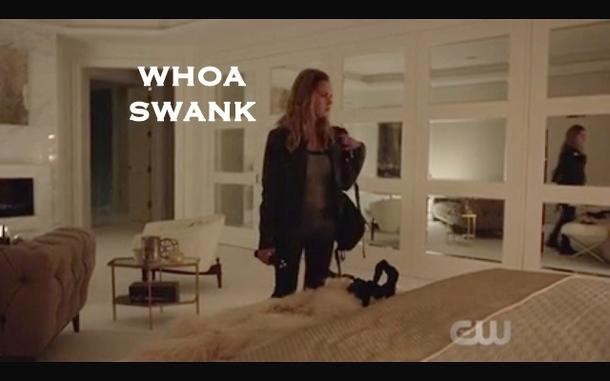 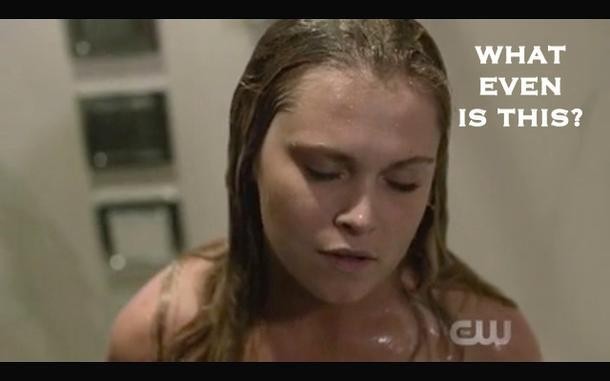 But if Clarke thought she could have a shower AND a nap in the same episode, she was dead wrong.

After Murphy swooped in to save the day (which, a man stepping in to save a woman rarely happens on this show, but I ain’t mad it happened – everyone needs a little help sometimes, no matter our gender), we learned that Emori was familiar with this stranger!

Meanwhile Kane was listening to Bellamy and the damsels saga like some kind of old-timey radio show.

Oh Kane, doing what he does best – babysitting situations. Bellamy got himself stuck in some mud, so Kane long-distance-staring-contested him into staying put and NOT melting for no reason. This of course meant that the disembodied voices were for sure going to die horrible, painful deaths.

This was very sad. Meanwhile at ALIE Island, Emori was listing all the ways the Grounder dude was the worst, and guilting Clarke into letting her kill him. 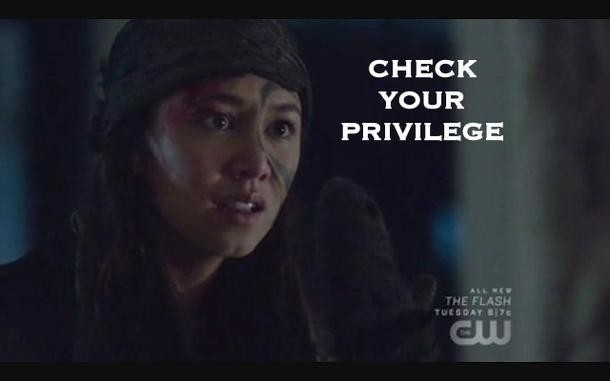 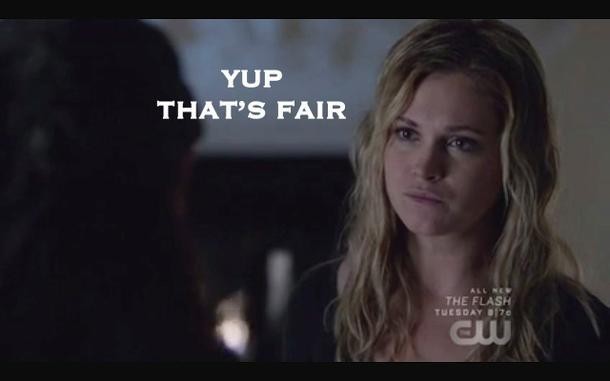 She reminded her that while Clarke was living in space basking in love and appreciation, Emori was living in a sewer surviving off pizza with her grand-rat Splinter. Not exactly a situation Clarke can comment on.

Then Clarke had an idea that was completely her own, and not the result of total manipulation. 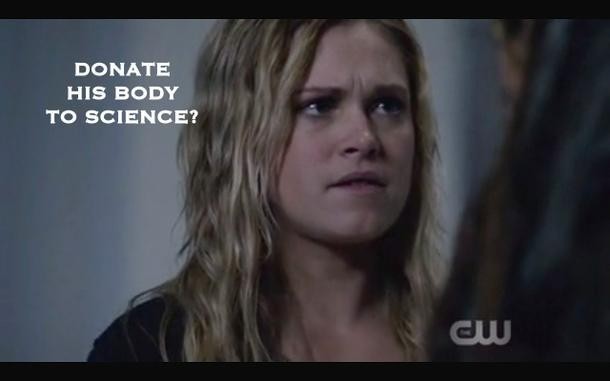 Back in the cozy cave beneath a death-waterfall, Ilian and Octavia’s highschool-party-in-a-basement was in full swing. 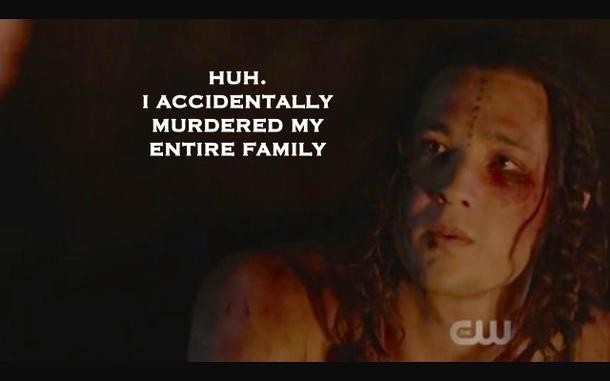 Ilian tried to make Octavia feel better about turning into a legit monster for a bit there, but then Octavia was like, “peace out”, and tried to walk into the death-rain. 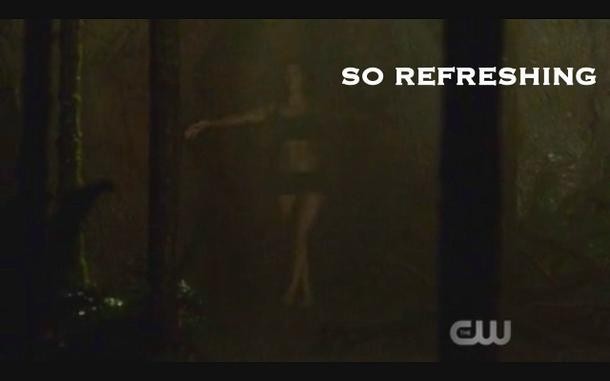 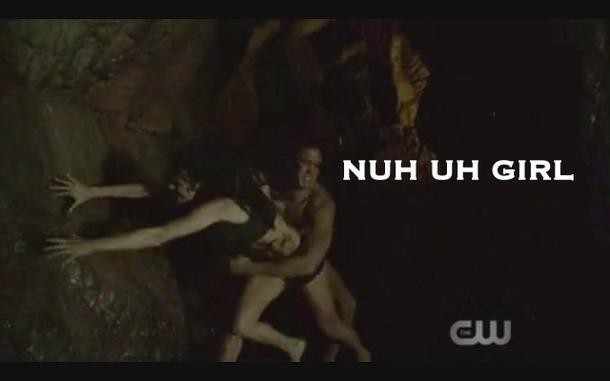 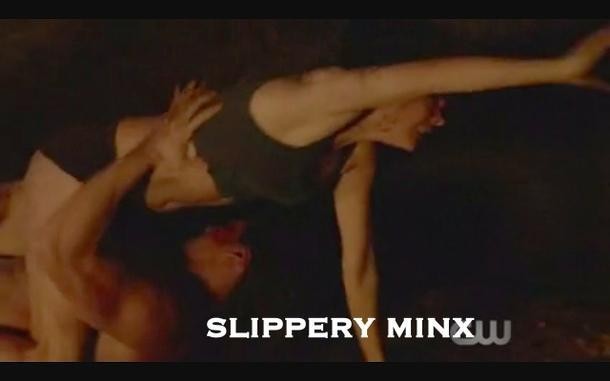 Then Octavia smooched him! And propositioned him for a sexy kerfuffle!

At first I had a bit of a beef with Octavia’s apparent suicide attempt. Not a full beef, just… 15%, like a MacDonald’s burger-level of beef. Because I was all, “nuh uh, Octavia wouldn’t do that!” But then I really noodled on it. Girl grew up under the floor with her only source of love and affection being her mother (dead) and her brother (currently dead to her). Then she came to earth and made exactly two human connections, Lincoln (dead) and Indra (presumed dead, although BETTER NOT BE). While I don’t believe if Octavia truly thought about it, she would kill herself (not her style), I do think this was an earned reaction from a girl who is currently in a very dark place. So, fine. No more beef. Throw that burger out and get a sundae instead. 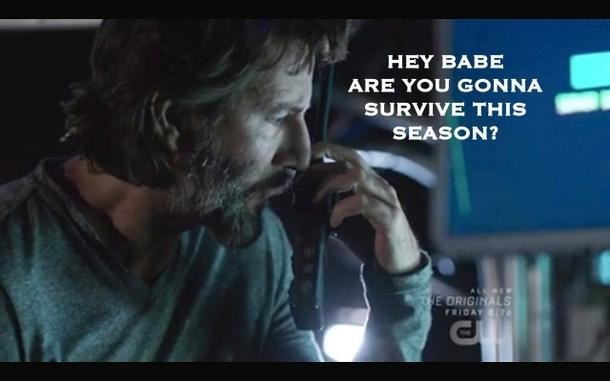 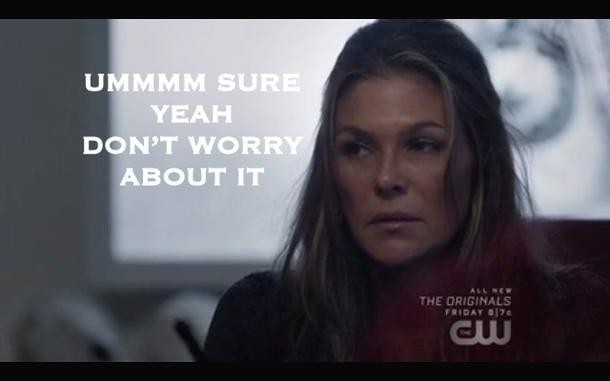 Abby was not looking great! I’m worried, you guys.

Back at Ark Camp the radio show Kane was listening to had a sad ending.

*sad face* Everyone was so good at acting in this episode! I wonder what one of the Hundred the unfortunate baked fellow was. The one Murphy peed on? The one who yelled “that’s the girl who lived under the floor!” in the pilot? Or maybe he just did his own thing, gathered radioactive nuts and played guitar by the fire. We’ll never know, because he’s dead. RIP Disembodied Burn Victims.

This scene was very cute. Ilian tried to play it cool and was like, “you should chill at my place sometime, or whatever, not like I care, see ya.” Then Octavia threw away her knives (!!!), and offered him a ride home.

LOVE THIS, and not just because of the doin’ it. Octavia has been battling her demons for a long time, even before Lincoln’s death. For her to crawl out of the Pit of Despair even for a moment is huge. The fact that a handsome grounder helped to pull her out was just a fun sexy bonus. But let’s get one thing straight – “walk into the setting sun and you’ll find it” are not great directions, Ilian! You could have thrown the girl a landmark or two!

Then a sad Bellamy returned to Ark Camp having made zero difference. 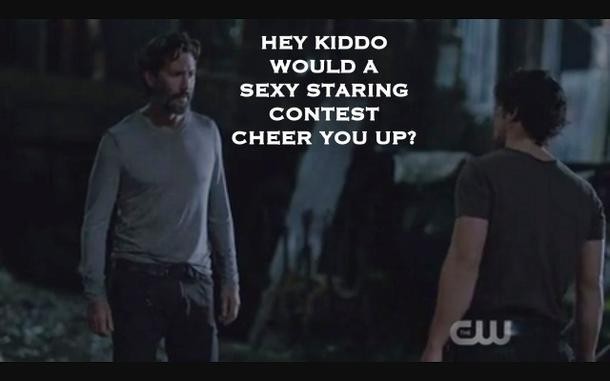 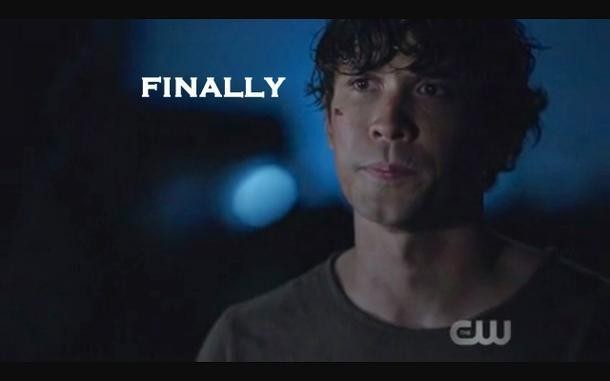 We were then treated to a pretty amazing scene of everyone feeling guilty about possible murder by science, when it was revealed that Emori is the greatest actor of them all.

She didn’t know that fellow even a little bit! She tricked everyone into believing he was a terrible person so they’d volunteer him to be melted.

HAHAHAHAHHAHHAAAAAMAZING! I loved this so much. We all knew Emori was a callous survivor, but this performance added so many layers to this girl. She’s a grade A manipulator! She knew exactly how to present this situation to benefit herself. And the fact that the Beautiful Creepster was ABOUT IT made it all the more entertaining.

Well guys, there we have it. This season is getting as hot as the radioactive air the characters are breathing. Gimme Shelter may not have dropped any plot (or literal) bombs, but it gave us something equally valuable – time for our beloved Squad to stew. Sure, it’s fun to watch our heroes saving the day, or murdering, or plotting, or being tortured, but in order to care about them, we have to know what’s going on in their heads. So every so often the show slows down a smidgen and lets us do just that. And what exactly is in their heads? Guilt, mostly, with a side of anguish and longing. But sometimes, in the case of a totally rad daughter of a ninja turtle, there are schemes!

What did you guys think? Are you even more in love with Emori than you were before? Are you mad at Ilian for putting his shirt back on? Do you wish Kane would dispense more hugs? Are you worried about Harper’s jacket?

That’s it from me! See you next weekkkkkkkkk!